The market is closing out October from a position of considerable strength. Consider:

1) October was free of notable market plunges (and historic fear).

2) The S&P 500 is sitting at an historic high with signs of healthy market rotation emerging this month.

3) The Fed said it will assess the “appropriate” path for rates, which the market is interpreting to mean the Fed “backstop” is still present, i.e. the Fed will step in and cut rates again if it needs to.

4) There is optimism on trade.

5) Perhaps most importantly, the market is entering its seasonally strongest two-month period of the year. November is the second best month for the S&P 500 since 1950, while December is No. 1, according to the Stock Trader’s Almanac.

So why isn’t the markets acting like it’s full-speed ahead? Conviction for a further rally is remarkably lacking.

“Trading volumes have been very light because a lot of traders are sitting on the sidelines,” Peter Tchir from Seaport Securities told me. “The hedge fund community seems to have very small positions. Some feel they’ve had good enough returns and they prefer to lock the returns in rather than chase further advances. And the news flow from the White House is very confusing.”

Look no further than Thursday for evidence that the market is in a fragile state. Stocks were poised to fall on a report that China is hesitant to make a long-term trade deal with the U.S.

And what about that seasonally strong November and December? “It’s true we are entering a seasonal strong period, but there are bitter memories of the disastrous December last year,” Tchir told me.

Still, parts of the trading community do believe that the Fed’s three rate cuts have offset some of the global risks. The steepening yield curve engineered by the Fed notably helped banks. Other cyclicals like Technology also rose in October, and former defensive leaders like Consumer Staples and Utilities were laggards:

What are the chances of a further 10% rally? “People have been wanting to buy into this cyclical rally, but they want more meat on the bones,” Alec Young, Managing Director, Global Markets Research. “The first step was getting assurances that the Fed backstop is still there if needed. They don’t need to keep signaling they are going to cut, they just need to keep the perception the Fed backstop is still in place.”

Next up: the October jobs report, out Friday. “We need numbers strong enough to stop people worrying about slowing growth, but not so strong it takes the Fed completely off the table,” Young told me, noting that the GM strike may skew the numbers.

After that, it’s all about trade. “Removing all tariffs is probably too optimistic, but there is certainly a hope the December 15 tariff hikes will be put off,” Young said. 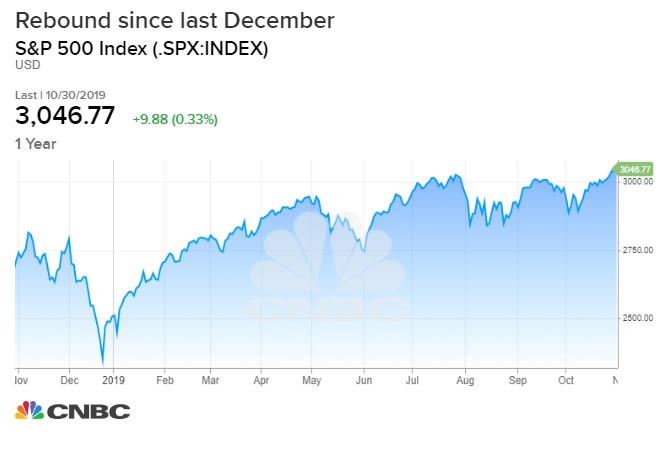 What about those bitter memories of December last year?

Tim Anderson, Managing Director at TJM Investments, says there is an essential difference between this time today and the same period last year.

“Last year, the Fed was in a rate-hiking mode. They are not this year. Last year, everyone was worried the Fed would begin a cycle of rate hikes. That was a big factor in the December drop” that is not present today.