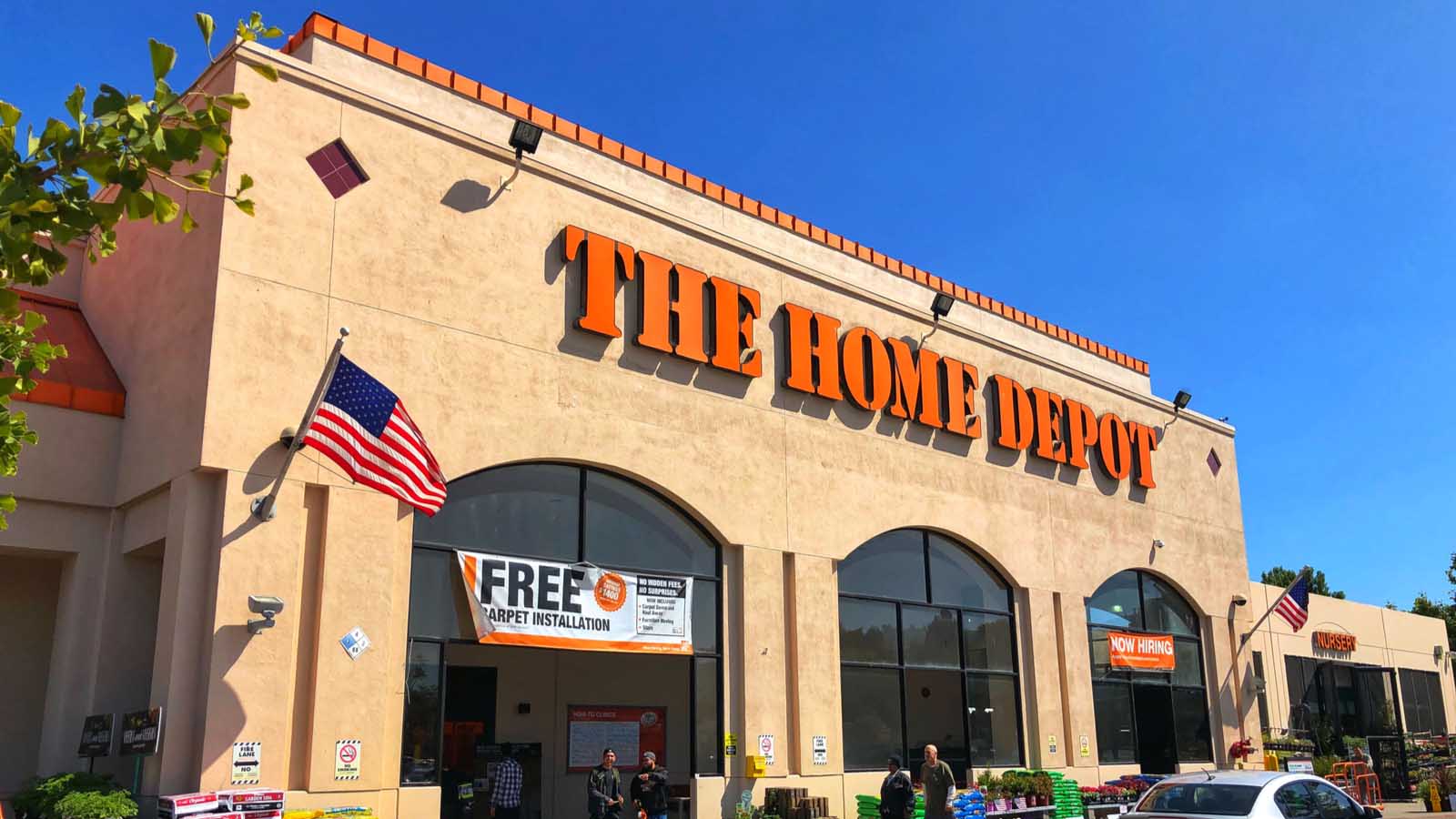 The Home Depot (NYSE:HD) stock price continues to rise. Home Depot stock now has gained 50% from its December lows and has consistently risen over that stretch.

The gains of Home Depot stock do make some sense. Sentiment towards the stock market and the economy has improved. Home Depot unquestionably is a wonderful company and one of the country’s best retailers. On its face, Home Depot stock doesn’t look particularly expensive, trading at less than 22 tines analysts’ average 2020 earnings per share estimate.

That said, at this point there’s a strong argument to be made that the gains have gone too far. Based on the multiples that investors have paid for HD stock in the past, its valuation is questionable. Concerns about the company’s fate during an economic downturn may lie dormant, but they’re not gone. And the fact is that Home Depot’s bottom-line growth simply isn’t nearly as impressive as the gains of HD stock price might suggest.

In September, I called Home Depot one of ten wonderful companies with a questionable stock price. After its move higher, HD shares look downright expensive.

When HD unveiled its second-quarter earnings  in August, the company  provided fiscal 2019 earnings per share guidance of $10.03. That, in turn, suggests that Home Depot stock is trading at over 23 times its 2019 profits.

That doesn’t necessarily seem so expensive. Actually, it’;s similar to what investors are willing to pay for the best businesses in the market. Walmart (NYSE:WMT) goes for 24 times this year’s consensus EPS, and Procter & Gamble (NYSE:PG) is trading at 25 times, while Microsoft (NASDAQ:MSFT) is nearing 27 times.

Investors can debate the relative merits of those respective businesses, but the broad point is that investors in this market are paying up for quality companies. That might be a risk with the S&P 500 at an all-time high, but it does suggest that at the least the valuation of HD stock isn’t higher than that of its peers.

But there’s a notable difference between Home Depot stock and  high-quality, defensive names. Home Depot is a cyclical stock, not a defensive one.  Repairs and remodeling will somewhat protect the company’s results during the next recession. But during downturns, Home Depot will take a hit in a way that defensive companies like Procter & Gamble and Microsoft will not.

Since 2003 or so, when its store growth started to slow,  HD stock has rarely traded above  20 times its EPS of the preceding 12 months. In fact, its P/E multiple has usually been closer to 15 times than 20 times.

So 23 times is a big multiple, both relative to other names in the market and to HD’s own range.

Put another way, a P/E ratio of 23 suggests Home Depot’s growth is accelerating. But that’s not the case. In fact, the reverse is true.

There are external factors at play. Lowe’s (NYSE:LOW) is a better competitor than it’s been in the past. Tariffs have had an impact on HD. Lower lumber prices have contributed to the recent reduction of the company’s same-store sales outlook.

Still, the impact of those negative catalysts have been somewhat minor. And the other stocks with similar valuations also have short-term profit headwinds, whether it’s Walmart’s investments in e-commerce or Procter & Gamble’s currency issues.

The fact is that Home Depot’s bottom-line growth is slowing. Analysts, on average, predict that its EPS will increase less than 10% next year, with some help from share repurchases.

A P/E ratio of 23 for roughly 8% growth is somewhat questionable for any stock. For a cyclical name, it’s a combination that simply doesn’t occur in the market very often.

The Case for HD Stock

I’ve been cautious about the valuation of HD stock before, — and so far I’ve been wrong. In this market, most investors who have focused on valuation over quality have missed out on gains.

But Home Depot stock now is trading at its highest multiple in 15 years, according to data from the website YCharts. It’s bounced almost 20% from its August lows despite a Q2 report that included a guidance cut. It’s tough to see how exactly the multiple of HD stock can expand any further. Even analysts expect the shares to fall modestly, with the average target price roughly 2% below the current HD stock price.

Expectations clearly have risen, and risen sharply, ahead of the company’s Q3 earnings on Nov. 19. And after its 50% gains over the last 11 months, those expectations may very well be too high.