The bond market has officially switched off its recession alarm and is pointing to the potential for stronger growth.

Since the summer, when fear of a global economic meltdown gripped the bond market, conditions in the Treasury market and economy have changed. So has the outlook for U.S.-China trade talks, and as a result bond yields, which move opposite price, are rising.

Now that the Fed has cut rates three times, short-end yields, like the 2-year, are not rising as fast as long duration yields. The 2-year at its high, was up 10 basis points on Thursday but the 10-year yield snapped higher by about 14 basis points on reports that tariffs could be dropped. The yield rose to 1.95% in its biggest one-day move since the 2016 presidential election.

The 10-year was also at its highest level since August 1, the day that Trump tweeted he could put new tariffs on China, a negative event for markets. It was also the day after the Fed cut interest rates by a quarter point, its first of three cuts.

Short duration yields are no longer higher than the rates on the long end, like the benchmark 10-year yield. That phenomena is called an inverted yield curve, and it is a signal in financial markets that a recession could be on the horizon. That sentiment peaked in late August and September. 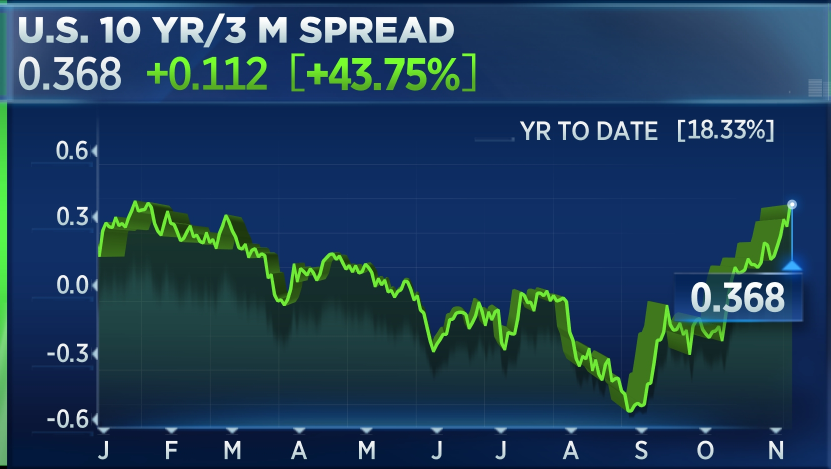 Now the curve has steepened, and the closely watched 3-month to 10-year spread is at the highest it’s been since last January, a month after the Fed’s final rate hike. The 3-month Treasury bill yield was 36 basis points below the 10-year note yield on Thursday, after dipping to as low as negative 54 basis points in August.

“One way to interpret the flattened or inverted yield curve is it’s a potential indicator of a monetary policy error. We’re seeing the probability of that getting significantly reduced. You had the Fed cut three times despite a tight labor market and a near high in equities,” said Jon Hill, senior rate strategist at BMO. “Economic momentum might have hit a trough. The concern about the manufacturing slowdown, the global synchronized recession seems to have been over blown.”

Strategists say yields are in an uptrend, in large part because of progress in trade talks. But they do not see the 10-year moving much above 2% in the short term, as the markets watch trade developments and economic data. Hill said the next high watermark to watch on the 10-year would be 2.06, the high on Aug. 1.

The 3-month to 10-year spread has moved by more than 90 basis points, from the largest point of inversion in late August.

“It turns out when you cut short rates 75 basis points, you can steepened that curve by 93 basis points. In general it looks more and more like the Fed might achieve their soft landing. It’s by no means a done deal. This is still predicated on the trade deal being completed and continued positive economic data,” said Hill.