Sellers are finally fighting back this morning, causing U.S. stock futures to open negative. Ahead of the bell, futures on the Dow Jones Industrial Average are down 0.31% and S&P 500 futures are lower by 0.29%. Nasdaq Composite futures have shed 0.31%.

Tuesday’s action in the options pits followed the usual script with call volume climbing faster than puts. Both ended near average levels with about 18.8 million calls and 14.1 million puts changing hands.

At the same time, the CBOE Volatility Index (VIX) single-session equity put/call volume ratio slipped slightly to 0.59, landing it right on top of the 10-day moving average. The cluster of low readings in recent weeks continue to reflect a complacent backdrop for equities. 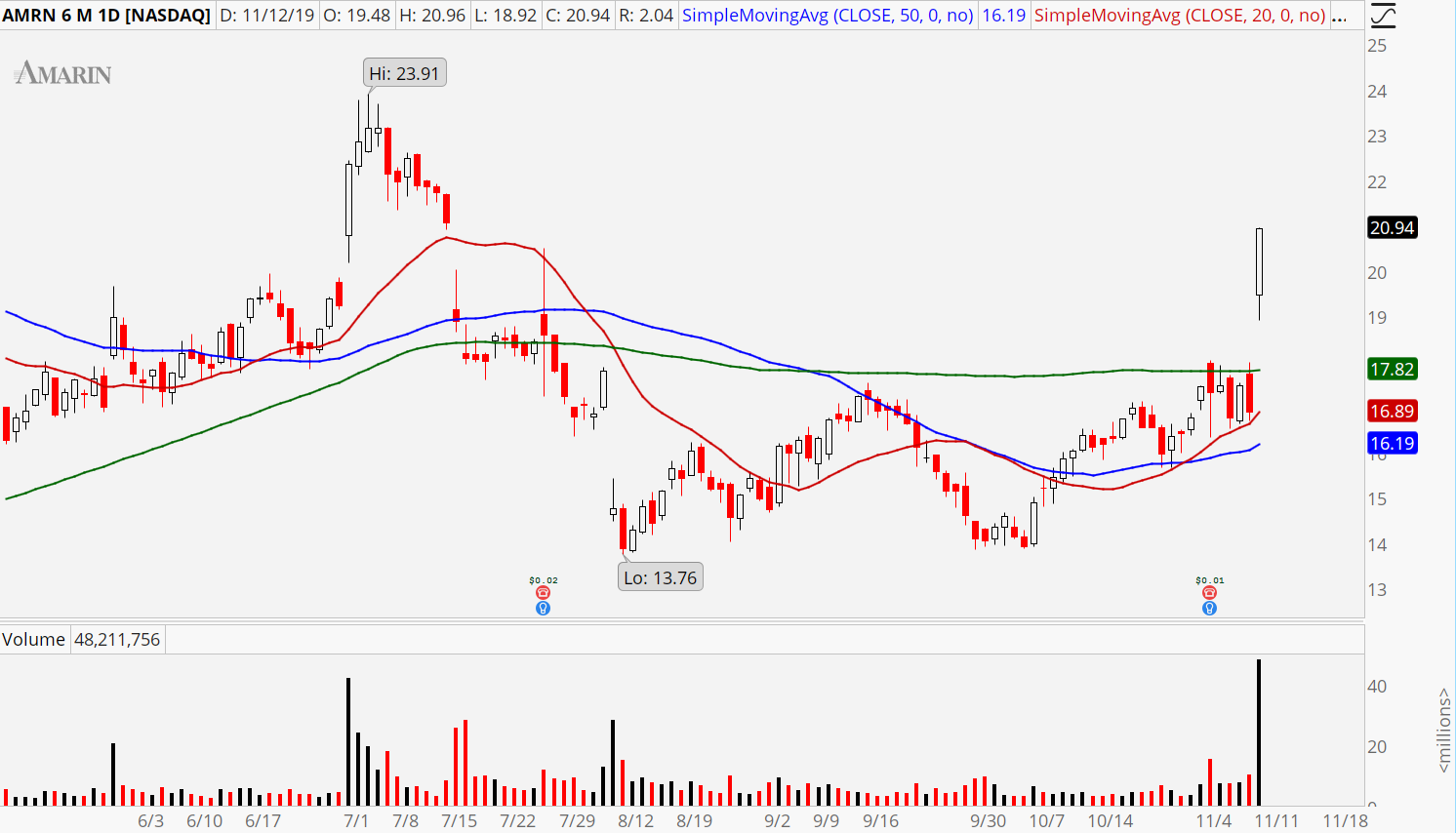 Amarin made a rare appearance on the most-active options leaderboard on a day that saw the stock rocket 21% higher. The drug maker is seeking U.S. Food and Drug Administration approval to expand the label for its fish oil-derived pill, Vascepa. If approved — which seems likely given Tuesday’s jump — the label will start mentioning the drug’s potential to reduce cardiovascular risks like strokes and heart attacks.

AMRN stock has spent the entire year stuck in a sloppy trading range. We’ve seen two previous attempts to break out and start trending fail. The volume underlying the current bid is the highest of the year, so conviction levels are running high that this one can go the distance. The next logical target is $24.

As you’d expect during such a robust rally, calls were the hot ticket on the session, accounting for 62% of the day’s take. Total activity climbed to 561% of the average daily volume, with 216,885 contracts crossing the table.

With the resolution of Amarin’s FDA request seemingly priced in, implied volatility sank on the day to 84% or the 35th percentile of its one-year range. Premiums are pricing in daily moves of $1.10 or 5.3%. 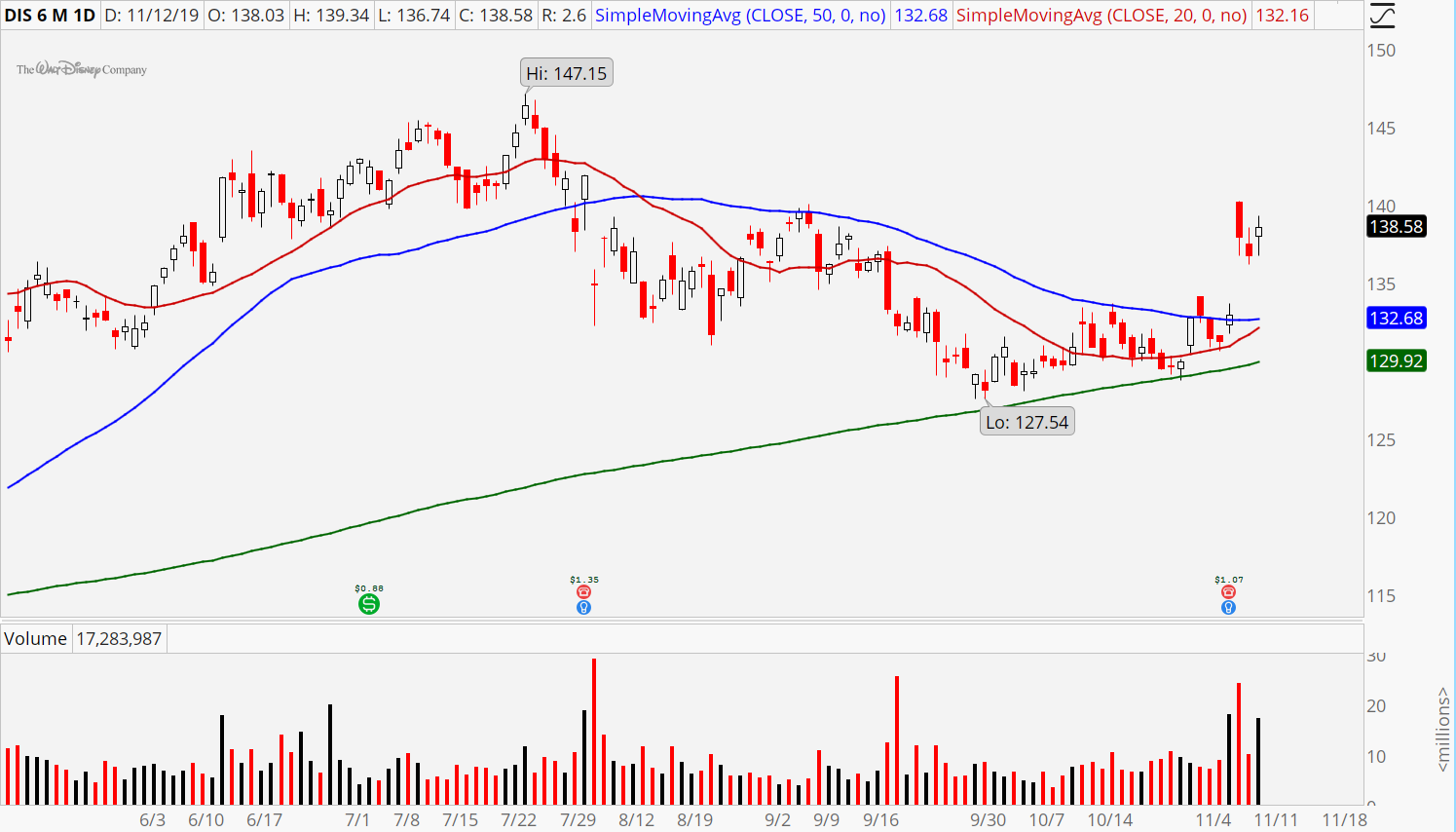 The hotly anticipated launch of Disney’s streaming platform Disney+ has arrived. Its debut helped lift DIS stock 1.3% and kept rally hopes alive after last week’s substantial earnings gap was met with profit-taking. The Street’s enthusiasm was on full display in the options mart, with calls on fire throughout the session.

Total activity ballooned to 262% of the average daily volume, with 277,045 contracts changing hands. Calls accounted for 80% of the tally.

Implied volatility dropped to 22%, placing it at the 22nd percentile of the one-year range. Traders now expect daily moves of $1.93 or 1.4% in DIS moving forward.

With the price of Disney shares back above all major moving averages, buyers have regained the upper hand. I like the chances for a run to year-end. Buying the Jan $140/$145 bull call spread is a cheap way to play it. 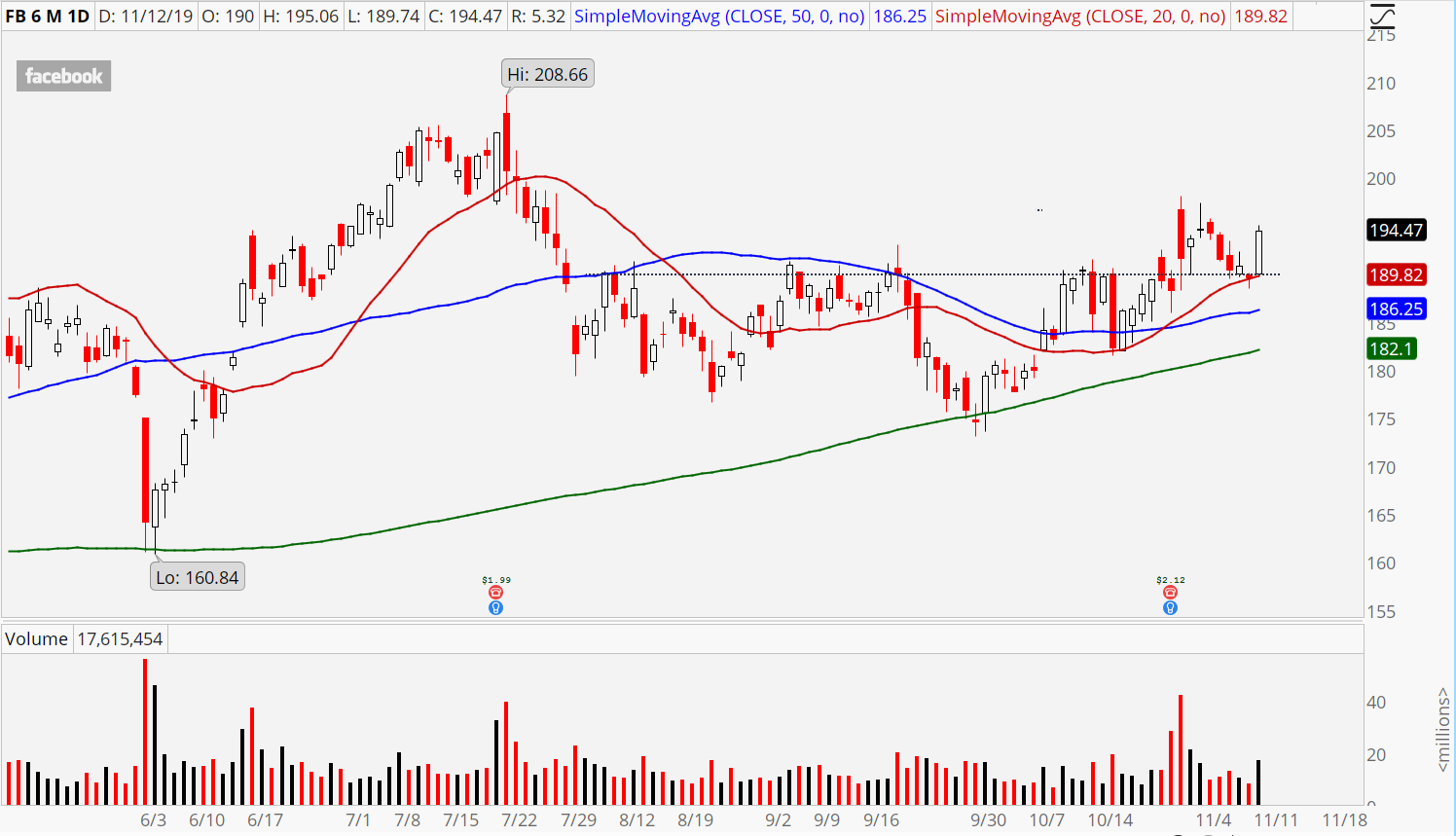 Volume surged to 17.6 million shares during the 2.6% jump, which saw old resistance at $190 officially turn into support. The 20-day moving average also held, reaffirming the budding uptrend. Look for a return to $200 in the coming days.

A survey of options trading reveals substantial swarming around call options. They outpaced puts by a wide margin and drove 71% of the take. Total activity grew to 132% of the average daily volume, with 340,841 contracts traded.

Implied volatility continued to hover near the lower end of its range at 25%, or the 12th percentile. Bull call spreads are my strategy of choice here. If you think FB stock can rise above $205 over the next two months, then buy the Jan $195/$205 call spread.

As of this writing, Tyler Craig held bullish positions in FB and DIS. For a free trial to the best trading community on the planet and Tyler’s current home, click here!