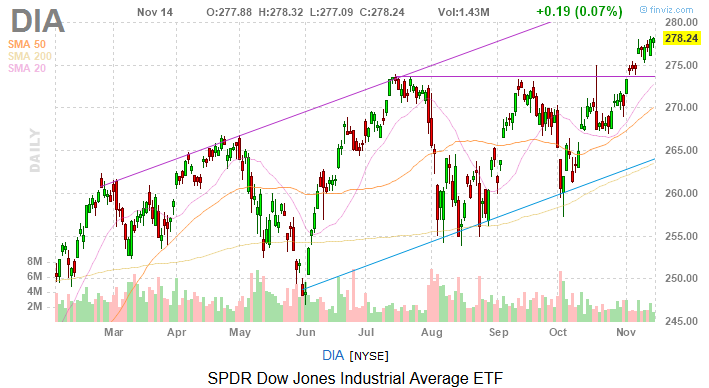 Markets drifted just below the break-even line for much of the day despite some solid comments from Federal Reserve Chairman Jerome Powell regarding the strength of the U.S. economy.

“Our forecast is, and our expectation very much is, one of continued moderate growth,” said Powell in testimony before the House Budget Committee today. “The U.S. economy is the star economy these days … There is no reason to think that I could see that the probability of a recession is at all elevated at this time.”

Certainly, it’s good news that the world’s largest economy has star status and that status is all the more important with the holiday shopping season upon us.

“With over 1 million additional people hired and receiving paychecks relative to 2018, there appears to be a greater absolute number of people with incomes to spend,” said Main Management in a recent research piece. “If the increased number of hires is paired with sharply lower layoffs for the past two months, the scenario further improves.  The National Retail Federation spending forecast for November and December 2019 appears to underscore this assessment. As a result, the odds of a green Christmas continue to improve.”

However, economic ebullience was held at bay today as 21 of the Dow’s 30 members were lower in late trading.

As noted earlier, Cisco (NASDAQ:CSCO) was easily the worst-performing member of the Dow Jones today. The communications gear giant reported fiscal first-quarter results after the close yesterday, saying it earned 84 cents a share on revenue of $13.20 billion. Wall Street was expecting 81 cents a share on sales of $13.09 billion.

Cisco’s results weren’t the problem. Outlook for the current quarter was. For the fiscal second quarter, California-based Cisco expects to earn 75 cents to 77 cents, below the 79 cents analysts were expecting. The company also forecast a revenue decline of 3% to 5%.

Keeping with the themes of earnings and consumer spending, Walmart (NYSE:WMT), perhaps surprisingly, was also among the Dow losers today, shedding 0.27%. Before the bell today, the world’s largest retailer said third-quarter same-store sales rose 3.2%, better than the 3% Wall Street expected. Overall quarterly results were tepid due in large part to foreign currency issues (strong dollar), but Walmart’s forecast was impressive.

The company said it expects year-over-year earnings growth, better than previous guidance of no growth.

You Don’t See This Everyday

It takes some guts to be bearish on Apple. There are 44 analysts covering the stock and 38 are somewhere between neutral and highly bullish on the name, so being bearish on Apple puts an analyst in a sparsely populated group.

“We expect operating profit to decline y/y to our below consensus iPhone view, despite ongoing growth in services and wearables,” said Chokshi.

Over the immediate term, retail sales, holiday shopping, trade and Fed talk are the likely drivers investors will need to absorb, but with a glance toward 2020, trade and some other issues will be on the docket.

“Yet there have been signs recently that global manufacturing activity may be bottoming and that U.S.-China trade tensions may be abating, at least temporarily,” according to BlackRock. “This pause in the protectionist push has helped fuel recent risk asset rallies — and helps keep us moderately pro-risk. A potential wildcard for 2020 that we’ll be debating: The market implications of the U.S. presidential election campaign and its result.”