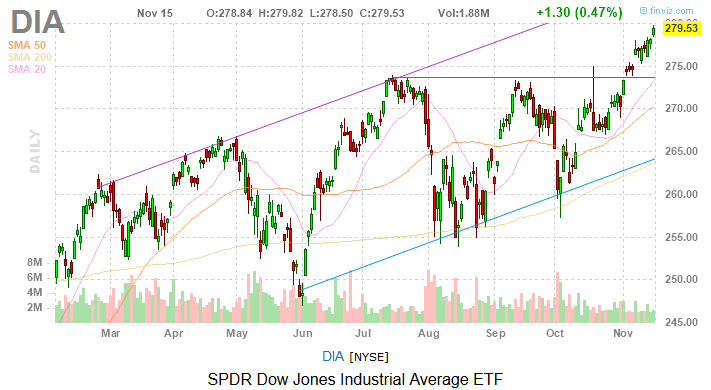 U.S. stocks advanced to fresh record highs to close the week. White House economic advisor Larry Kudlow noted that “short strokes” on a trade deal with China are close to completion and that “the mood music is pretty good” when it comes to finally getting Phase I of the accord signed by both sides.

With the trade talks being a familiar theme this week, Treasury yields declined for much of the week on some nibbling at defensive trades by market participants. But bond prices declined today on the positive trade news.

“Concerns about the chances of the U.S. and China completing a phase-one pact had propelled Treasuries earlier this week, and acted as a headwind to a stock rally that keeps taking American gauges to record highs,” according to Bloomberg.

Some decent earnings reports out of the semiconductor space propelled all of the Dow’s technology components higher today. It also boosted the Nasdaq Composite to another record close.

In late trading, about two-thirds of the Dow’s 30 constituents were pointed higher with a handful flirting with gains of 2% or more.

In news that didn’t get much attention, Pfizer (NYSE:PFE) and rival Bristol-Myers Squibb (NYSE:BMY) announced the start of a new stroke prevention study known as Guard-af. This stands for “reducing stroke by screening for undiagnosed atrial fibrillation in elderly individuals.”

While the companies took some liberties with that acronym, shares of Pfizer were up 2% today, pacing a mini-healthcare resurgence for the Dow today because each of the index’s components from that sector traded higher on Friday.

I mentioned a couple of times in recent days that Nike (NYSE:NKE) was dealing with rough public relations and the trade wranglings with China are often a headwind for NKE stock. But the shares jumped almost 2% today after the Oregon-based company announced a dividend hike.

After the close of U.S. markets Thursday, Nike said it’s boosting its quarterly payout 11% to 24.5 cents a share from 22 cents.

Yesterday, a sell-side analyst demonstrated some guts by issuing a “sell” rating on Apple (NASDAQ:AAPL). Indeed, that’s a rare occurrence and investors were reminded of that today as several analysts that cover Apple were talking bullish on the stock.

In fact, three analysts — from J.P. Morgan, Piper Jaffray, and Wedbush —each raised their price forecasts on Apple today.

Ives notes “the combination of a ‘super cycle’ demand driver between iPhone 11/5G lineup of smartphones and a robust ~$60 billion services platform by FY 2021 will be the linchpins of the Apple growth story and stronger fundamental outlook looking ahead and thus command a higher multiple from current levels in our opinion,” in a note cited by Barron’s.

Home Depot (NYSE:HD) is one of the few Dow companies that haven’t yet reported earnings for the most recent quarter. But next week, it and rival Lowes (NYSE:LOW) step into the earnings confessional. At least one analyst is expecting Home Depot to get the better of its rival again.

Today, Jefferies boosted its price target to $268 from $246 on Home Depot. That company reports on Nov. 19 followed by Lowes the next day.

“So, should an all-time stock market high be cause for concern? Not really. Dating back to 1990, the average market returns over the 3-month, 6-month, and 12-month periods following all-time highs were 3%, 6%, and 13%, respectively,” according to State Street.

The research suggests there were some bumps along the way and that may be the case again this time around, but for now at least, it looks like the major averages are poised to rally into year end.