U.S. stock futures are trading higher this morning as buyers take control for a holiday-shortened week. Ahead of the bell, futures on the Dow Jones Industrial Average are up 0.23%  and S&P 500 futures are higher by 0.27%. Nasdaq Composite futures have added 0.4%.

In the options pits, calls outpaced puts by their usual margin Friday, even as overall volume remained near average levels. Approximately 19.6 million calls and 14.7 million puts changed hands on the session.

Meanwhile, over at the CBOE Volatility Index (VIX), the gap between calls and puts narrowed, causing the single-session equity put/call volume ratio to shrink to 0.58.  The 10-day moving average continues to hover near 0.56. 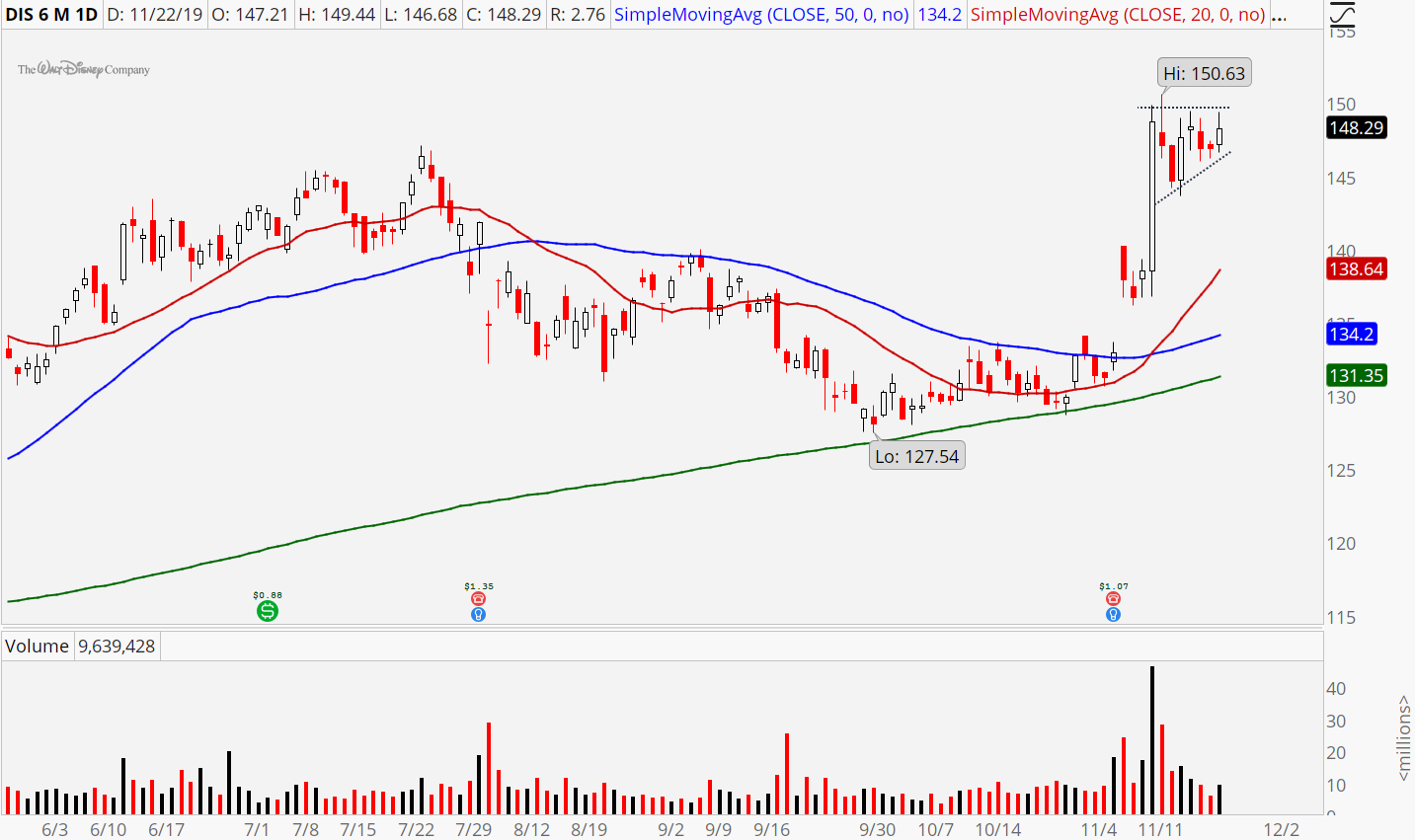 Continued excitement over the recent release of Disney’s new streaming service Disney + is keeping DIS stock aloft. The consolidation that has emerged following the eye-popping 7.3% rally when the product first dropped is extremely constructive. It shows that bulls are quick to buy weakness and support the stock’s higher price levels.

Resistance has formed at $150, but I think it’s only a matter of time before the ceiling gives way. A break and close above $150 would signal the next advance is starting.

As far as options trading goes, Friday saw calls drive the lion’s share of the trading. Activity climbed to 166% of the average daily volume, with 355,951 total contracts traded. 84% of the trading came from call options alone.

The increased demand pushed implied volatility to 23% or the 29th percentile of its one-year range. The expected daily move is now priced at $2.18 or 1.5%. 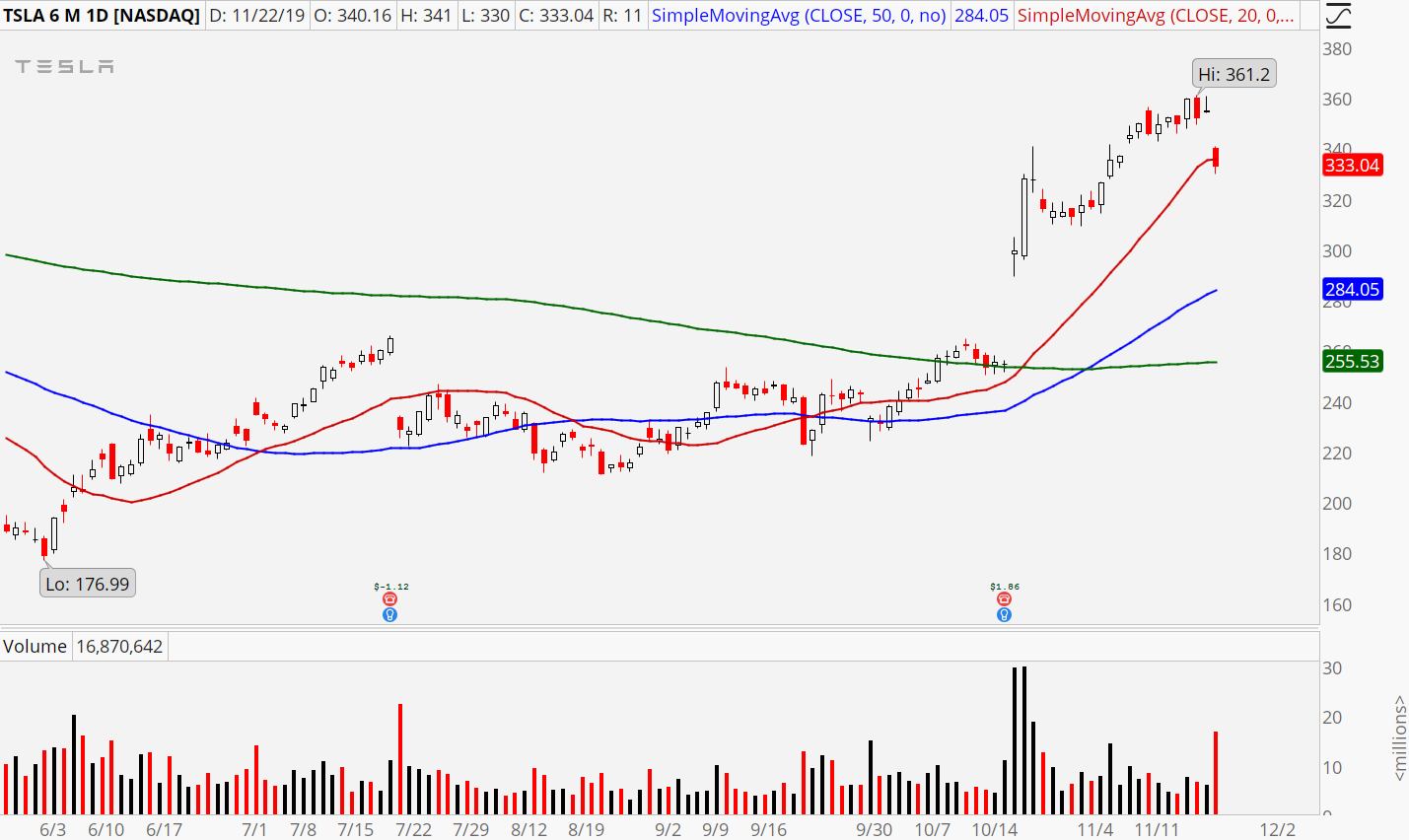 The Cybertruck’s long-awaited debut created quite the stir in TSLA stock on Friday. Volume surged to its highest levels of the month, with 16.9 million shares traded. Bears won the day and knocked the stock down 6%. I’d chalk the behavior up as a classic “sell the news” type reaction. Tesla shares ran hard ahead of the event and were due for some profit-taking anyway.

I wouldn’t be too concerned about the selloff, though. This morning buyers are returning to drive TSLA back up 3.3%. Over the weekend, Elon Musk tweeted the company had already received 200,000 preorders for the vehicle.

On the options trading front, demand was split almost 50-50 between calls and puts. Activity grew to double the average daily volume, with 681,971 total contracts traded.

Implied volatility fell to 41%, placing it at the 6th percentile of its one-year range. The expected daily move for the stock is $8.60 or 2.6%, so set your expectations accordingly.

With the stock set to gap open so much this morning, I find this a tricky spot to deploy new trades. Patience could be warranted until a clearer pattern emerges. 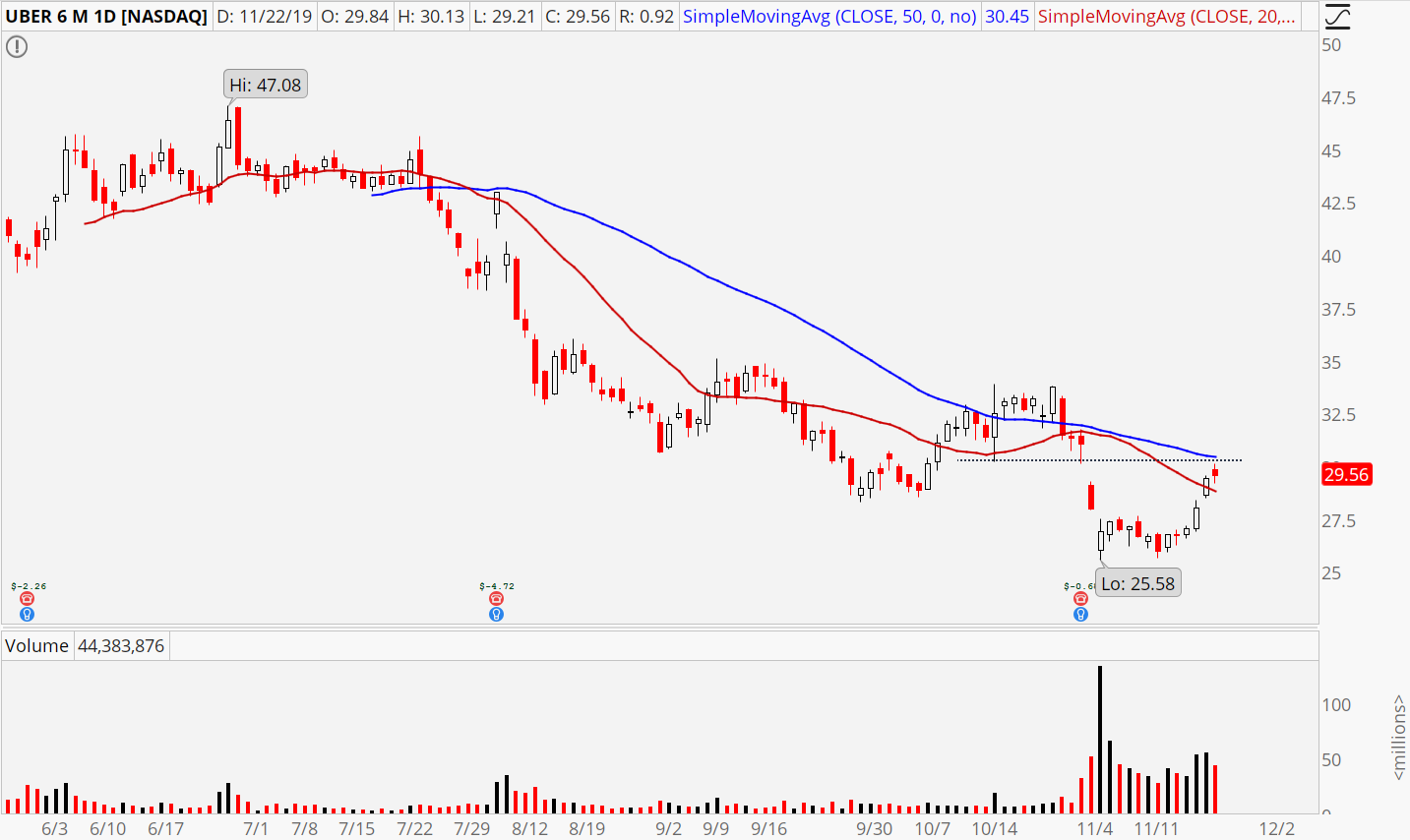 The rebound in Uber shares finally encountered a resistance level which halted the advance. Old support and the declining 50-day moving average sit at the $30 level and are thus far holding firm. Sellers’ strength is gaining this morning with UBER stock set to open down 3%.

The news isn’t helping Uber’s recovery attempts either. Just this morning the company lost its license to operate in London due to safety concerns. Uber is appealing the decision but the uncertainty isn’t helping its struggling share price. If anything, last week’s rally makes it an even more attractive stock to short because it created a low-risk entry point for new bear plays.

On the options trading front, calls edged out puts by a slim margin. Total activity edged higher to 128% of the average daily volume, with 187,884 contracts traded. Calls accounted for 52% of the session’s sum.

Implied volatility lifted to 44% but remains near the bottom of its one-year range. Premiums are cheap enough to make long put or put spreads attractive if you think the downtrend continues.