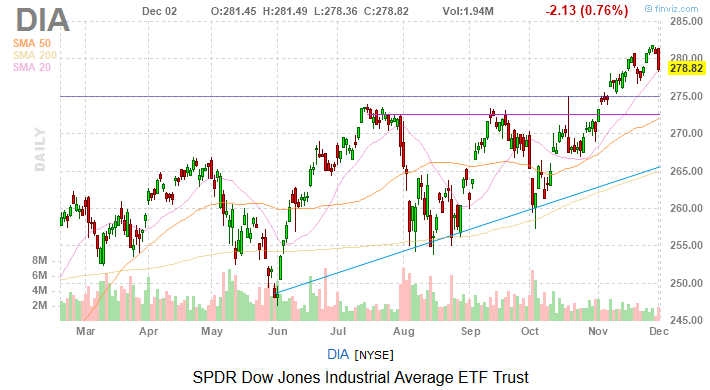 December is usually a pretty good month for stocks and that historical precedent may yet prove true this month, but it was defied Monday as equities tumbled on the back of some weak manufacturing data and another tariff gambit by the White House.

One of the main reasons stocks weakened to start the final month of 2019 was dismal factory data. Earlier today, the Institute for Supply Management’s (ISM) manufacturing index reading for November declined to 48.1 in November from 48.3 in October. Economists were expecting a November reading 49.2. That’s bad not only because the November reading missed estimates, but also because reports below 50 are seen as bearish.

Another reason that traders reacted in bearish fashion to the ISM number is that it could be a precursor to more discouraging data and that’s a relevant point to consider because the Labor Department deliver the November jobs report before the bell this Friday.

On the tariff front, perhaps the best thing that can be said is that today’s headlines don’t involve China. Rather, President Trump is targeting Argentina and Brazil with new steel tariffs. This is repeat of something the White House did a couple of years ago and the effects were positive for domestic steel producers.

“Brazil and Argentina have been presiding over a massive devaluation of their currencies. which is not good for our farmers,” said the president on Twitter. “Therefore, effective immediately, I will restore the Tariffs on all Steel & Aluminum that is shipped into the U.S. from those countries.”

Overall, today was gloomy for the Dow Jones as just five of its 30 components were higher in late trading. Let’s look at some of the best and the worst to start the week.

The aforementioned ISM report proved highly damaging for industrial stocks as none of the Dow’s constituents from that sector finished higher today. Boeing (NYSE:BA) was the worst offender among Dow industrial stocks, shedding more than 3%.

This could be another eventful month for Boeing Federal Aviation Administration (FAA) head Steve Dickson will testify before the House Transportation and Infrastructure Committee next week about the Boeing MAX 737.

“U.S. officials told Reuters last week it is extremely unlikely, if not impossible, that the agency will unground the plane before the end of December,” according to the new agency.

United Technologies (NYSE:UTX), Caterpillar (NYSE:CAT) and 3M (NYSE:MMM), the Dow’s other industrial names, were all dragged lower by the ISM report.

“The guts of the report show just how dismal the industrial sector looks,” reports Barron’s. “New orders, an indication of demand, dropped for the fourth straight month and at an accelerating pace. The streak is the worst since the financial crisis, and it comes despite seasonal factors that tend to give a lift to orders this time of year, said Tim Fiore, chairman of the ISM’s survey committee.”

Last Friday was Black Friday and today is Cyber Monday, two of the most important days of the year for retailers. However, Black Friday has lost some of its cache in recent years due to the emergence of online shopping. Still, some brick-and-mortar retailers are have significant e-commerce footprints, too. That group includes Walmart (NYSE:WMT).

Although Walmart, a Dow component and the largest domestic retailer, experienced a rocky road today, some analysts believe it and rival Target (NYSE:TGT) are winners this holiday shopping season and beyond.

“We strongly believe that both WMT and TGT’s drive up/grocery pick up options offer exactly what the consumer will need as they are increasingly constrained by time,” said Raymond James retail analyst Matthew McClintock in a note out today.

Due to the risk off tenor to today’s market action, it wasn’t surprising to see the Dow’s technology constituents retreat, but several of these names remain “buys” this month and for the year ahead.

Apple (NASDAQ:AAPL) traded slightly lower despite JPMorgan analyst Samik Chatterjee raising his price target on the iPhone maker to $296 from $290.

Speaking of the iPhone, Chatterjee says Apple could eventually consider launching more new versions of the popular smartphone to match Android launches. Apple usually has just one launch per year for the iPhone while Android phones are introduced by handset makers throughout the year.

Intel (NASDAQ:INTC) joined Apple in the red, Bank of America Merrill Lynch analyst Vivek Arya up his price target on the semiconductor giant to $70 from $65 today while publishing a note outlining five reasons to buy the stock.

With manufacturing data deteriorating, there is some burden on consumer data to pick up the slack and that thesis is being tested as we speak thanks to the holiday shopping season. Broadly speaking, investors should expect the consumer to remain healthy, but not overly buoyant.

“Absent a trade or other exogenous shock, the U.S. economy looks to grow again in 2020,” said BlackRock in a note out earlier today. “Real personal consumption has been growing every quarter since the end of 2009. While household consumption remains moderate relative to history, it is not decelerating as it was in late 2007.”