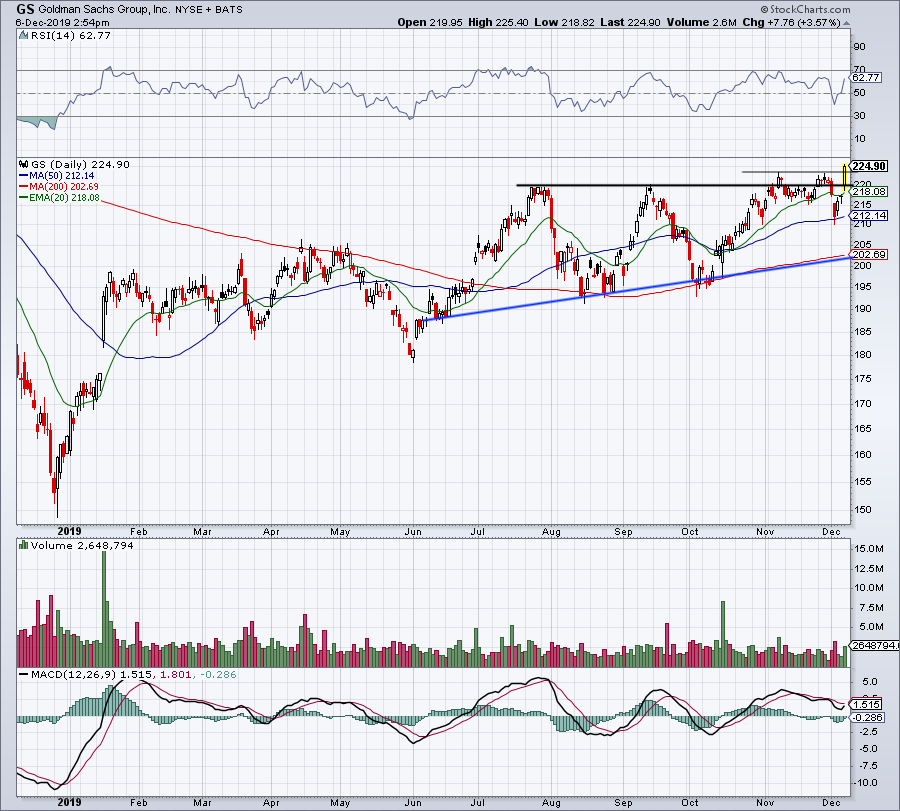 A blowout non-farm payrolls report launched U.S. equities higher on Friday. Can they continue the momentum next week? Let’s look at a few top stock trades that might help.

At one point, it felt like you couldn’t give Goldman Sachs (NYSE:GS) away — that’s how bad investors didn’t want to own the stock. Now though? Shares are in breakout mode.

$220 has been resistance for the past few months, but each dip in GS kept on getting more and more shallow. That’s shown via uptrend support (blue line). With it now breaking out over resistance to new 52-week highs, bulls will likely look to keep up the momentum.

Should GS wobble, look to see if the $220 breakout area acts as support. If it does, it could be a buy-the-dip opportunity. 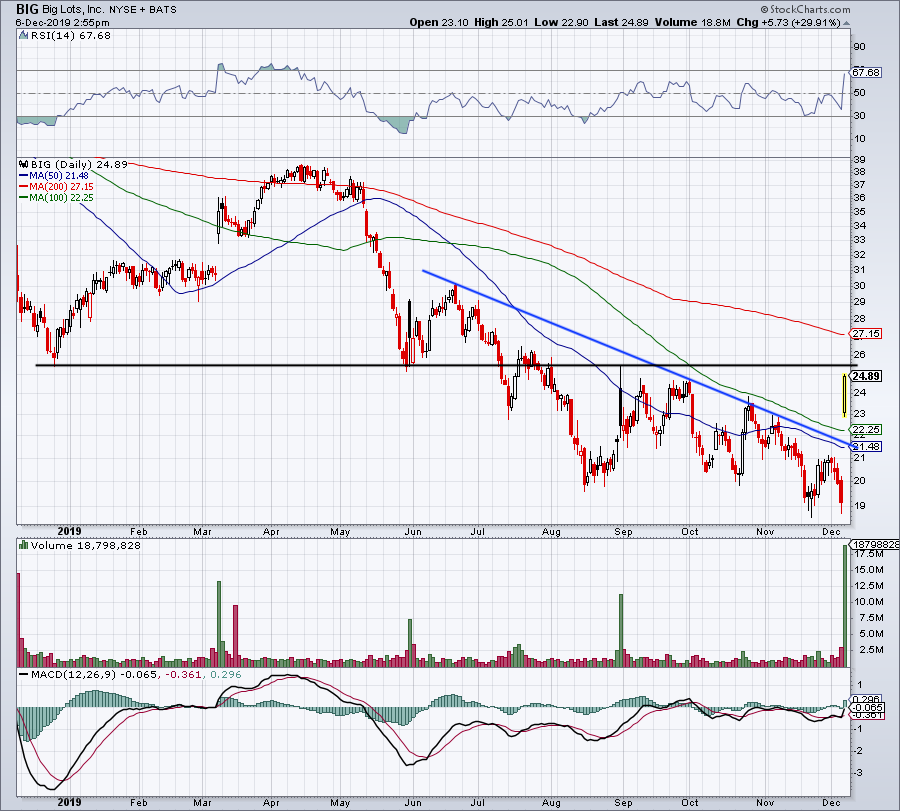 Big Lots (NYSE:BIG) roasted short sellers on Friday, ripping 30% on better-than-expected earnings. This isn’t a big-time breakout like we saw with RH (NYSE:RH) the other day, but it’s still an encouraging move for bulls.

Now, though, potential resistance looms nearby. I want to see if BIG stock can clear the $25 to $26 area. If it can, it not only puts the declining 200-day moving average on the table, but also marks a huge turning point for sentiment.

If it gets over $26, bulls will have regained substantial control.

If this area acts as resistance though, it’s vital that BIG protects as much of its post-earnings gains as possible. Staying above the 100-day and 50-day moving averages would be ideal, but it’s now vital that the stock stays above prior downtrend resistance (blue line). 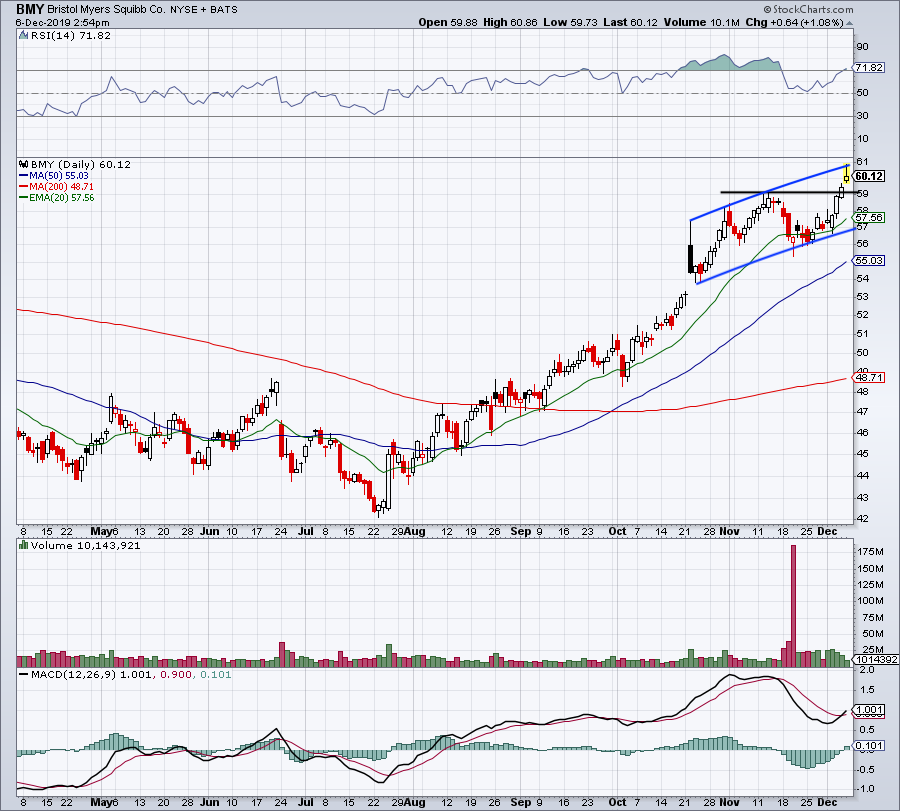 Bristol-Myers Squibb (NYSE:BMY) jumped to new 52-week highs on Friday, as bulls continue to bid this biotech stock higher. It recently closed on its acquisition of Celgene, while on Friday declaring a dividend that was up 9.8% from its prior payout. Nice.

Shares are backing off channel resistance (blue line), so it’s not clear if BMY will immediately continue higher or pull back first. If it’s the latter, it would be encouraging to see $58 to $59 hold as support. Below that level and channel support will be on the table

On a rally, see if shares can take out Friday’s high, potentially triggering a breakout over channel resistance. 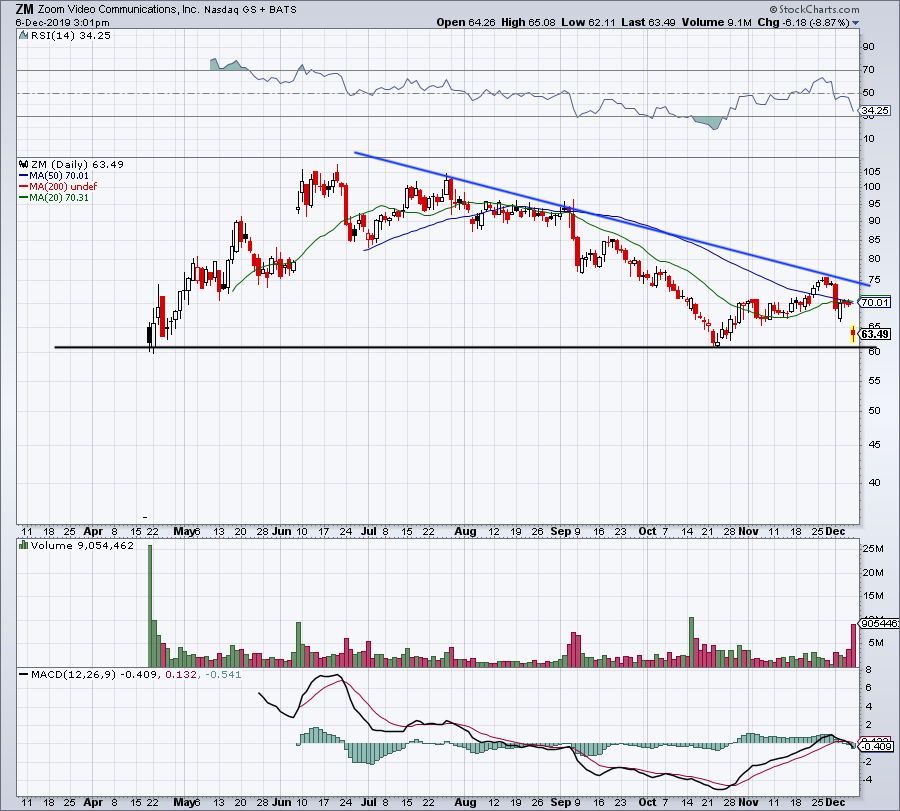 Last but not least is Zoom Video (NASDAQ:ZM). At one point Friday, shares were down more than 10% despite a beat-and-raise quarterly report.

Now the setup is quite simple. Either support between $60 to $61 will hold and ZM stock will bounce, or it will fail and probe new lows.

If it’s the latter, bulls have no need to be involved with the stock from a trade perspective. A close below $60 and ZM will clearly need some more time before finding its footing. If it holds though, look to see if it can rally back to the 20-day and 50-day moving averages, and reclaim its post-earnings losses.