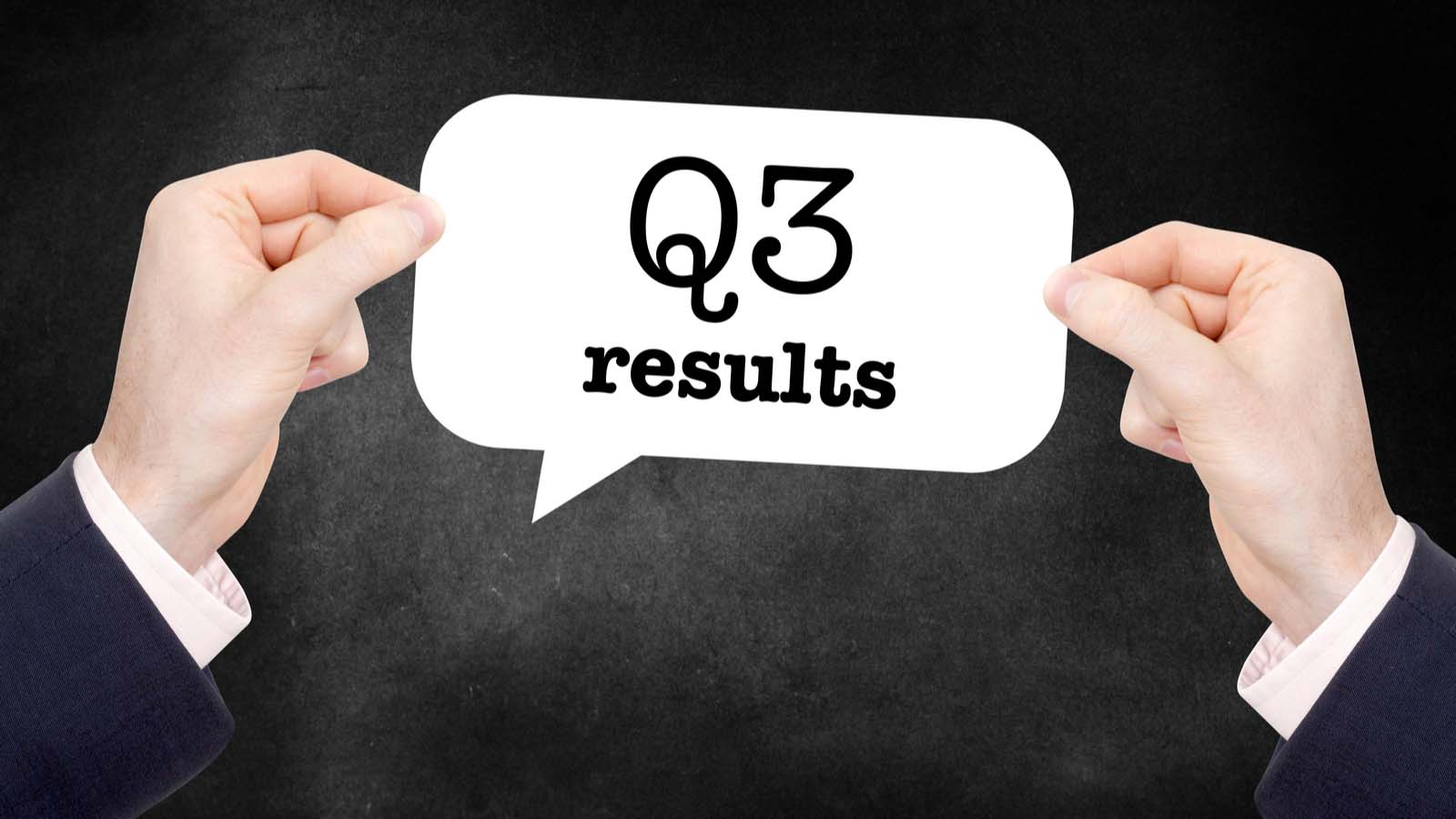 We are now at the very end of the third-quarter earnings season, with roughly 98% of S&P 500 companies having reported their Q3 numbers so far.

The results have been broadly positive. Sure, third-quarter earnings per share dropped more than 2% year-over-year. But, trade war pressures and slowing economic activity were supposed to cause an even steeper slowdown. Indeed, about three-fourths of S&P 500 companies reported Q3 profits that were above expectations.

Meanwhile, revenues largely came in above expectations, too, and rose about 4% year-over-year. Management teams also sounded a cautiously optimistic tone that profit margins would improve going forward with easing trade tensions. Consequently, the outlook is for this earnings slowdown to end soon, and turn into big profit growth in 2020.

Because of all these positive developments, stocks have surged higher this earnings season. Companies started reporting third-quarter numbers around early October. Since then, the S&P 500 has rallied 6% to all-time highs, marking one of its most impressive earnings season rallies in recent memory.

Which stocks led this earnings season rally? More importantly, which of these winners can continue to grind higher in 2020?

Let’s answer those questions by taking a closer look at seven strong stocks to buy that won big this earnings season, and will keep winning big into 2020.

In late November, Target reported impressive Q3 numbers which topped revenue, comparable sales, digital sales, margin and profit expectations. Management also hiked its full-year 2019 guide, while providing an above-consensus holiday quarter guide. In sum, the report affirmed that Target is not a “one hit wonder.” Instead, this company is leveraging strategic growth initiatives to sustain big growth and margin improvements.

All of this will persist into 2020 for a few reasons. First, the macroeconomic retail backdrop is improving. Trade tensions will ease. Consumer confidence will rebound. Spending trends will pick up, while tariff pressures will back off. Second, Target’s e-commerce business is still relatively small, while omni-channel buildout is still in its early stages. In 2020, both of these verticals will sustain strong growth through geographic expansion. Third, Target’s new smaller format stores are running at much higher gross margins than the larger format stores, and Target plans to open a bunch of these smaller format stores in 2020. Fourth, wage pressures should be offset by technology investments.

Target will sustain big revenue growth and margin expansion in 2020. As it does, TGT stock will sustain its upward momentum, because shares remain reasonably valued at less than 20-times forward earnings.

Shares of data analytics service provider Splunk (NASDAQ:SPLK) surged in the third quarter after the company reported strong numbers which broadly underscored that the company’s new Data-to-Everything platform is in the first innings of a big growth ramp.

Long story short, Splunk recently launched its Data-to-Everything platform. It is basically an all-in-one enterprise ecosystem where companies can turn data of all sorts into actionable insights. Splunk hopes that this new platform will become a must-have service in every office. Early demand trends support that dream. In the third quarter of 2019, strong early demand for the Data-to-Everything platform powered above-consensus revenue and profit growth.

Considering the world we live in today — one which is flooded with data and dominated by data-driven decision making — it is highly likely that Splunk’s Data-to-Everything platform continues to grow rapidly in 2020. Rapid growth from this platform will power a string of double-beat-and-raise earnings report in 2020.

The sum of these strong earnings reports, coupled with broadly bullish investor sentiment thanks to easing U.S.-China trade tensions, should keep SPLK stock on a winning path.

Target wasn’t the only retailer that reported strong third-quarter numbers at the end of November. Electronics retailer Best Buy (NYSE:BBY) did, too.

Specifically, Best Buy’s third-quarter revenues, comparable sales, margins and profits all came in above expectations. Management also raised its full-year guide and delivered an above-consensus fourth-quarter guide on both the revenue and margin fronts. Of importance, Best Buy appears to be sustaining strong revenue growth momentum thanks to ever-increasing demand in the consumer electronics space, while simultaneously keeping costs down and turning that strong growth into healthy profit margin expansion.

This favorable dynamic should persist in 2020. Over the next twelve months, the consumer electronics space will boom thanks to a plethora of tailwinds. You have the big 5G push, and the launch of several new 5G smartphones, including a 5G iPhone. You also have the introduction of cloud gaming consoles like Stadia, and the release of a new generation of Xbox and PlayStation consoles. There’s also a big streaming push unfolding with Disney (NYSE:DIS), AT&T (NYSE:T) and Comcast (NASDAQ:CMCSA) all entering the streaming wars. This push will naturally increase demand for streaming devices, which can be found at Best Buy.

All in all, 2020 is shaping up to be a pretty good year for Best Buy. Healthy revenue growth and margin expansion should persist. As it does, BBY stock should keep climbing higher, especially since shares remain dirt cheap at just 13-times forward earnings.

Global internet giant Facebook (NASDAQ:FB) reported third-quarter numbers in late October that breezed past expectations and underscored that this stock can (and will) head way higher over the next 12 months.

Zooming out, Facebook’s third-quarter numbers underscored that this company is past the Cambridge Analytica scandal, and that the company survived that scandal largely unscathed. User engagement, ad demand and revenue growth all remain robust. The only casualty? Profit margins. And those are already bouncing back.

In 2020, everything will only get better for Facebook. Ad revenue growth will remain strong behind advertising real estate expansion on Messenger and WhatsApp, as well as heavier ad usage in Instagram and Facebook Stories. The e-commerce business will gain strong early momentum behind Facebook Pay and Instagram Shopping. Margins will improve as big data-security investments phase out, and big revenue growth drives positive operating leverage.

Facebook will get back to 20%-plus revenue and profit growth in 2020. As it does, FB stock — which trades at just 23-times forward earnings — will run higher.

The hottest and perhaps least well-known stock on this list is small department store operator Stage Stores (NYSE:SSI). But, investors shouldn’t be intimated by the stock’s 630% year-to-date gain (yes, you read that right). Nor should they be scared by the company’s small size and relative obscurity.

Instead, Stage Stores’ third-quarter numbers confirm that investors should both embrace the recent red-hot rally in SSI stock and the fact that not many people know about the huge transformation playing out here.

Long story short, Stage Stores has been getting killed by Amazon (NASDAQ:AMZN), Walmart (NYSE:WMT), Target and a plethora of others, because the company has lacked the resources to compete in the full-price channel with these deep-pocketed retail giants. Amid this slaughter, Stage Stores bought off-price retailer Gordmans in 2017. It was a footnote that didn’t stop the bleeding. But, management started to notice that while their full-price Stage Stores locations were struggling, their off-price Gordmans locations were doing quite well.

Early data from this transition is promising. In the third quarter, Stage Stores converted 17 department stores to Gordmans off-price. Not coincidentally, comparable sales rose a whopping 17%.

This transition is still in its early days. By year end, Stage Stores projects to have 158 off-price locations. By the end of 2020, it will have 700. Thus, the bulk of the transition won’t happen until 2020. That means the bulk of the financial benefits won’t show up until 2020 or 2021. Considering SSI stock still trades at a rather lousy 0.1-times trailing sales multiple, that also means that the bulk of the SSI stock rally is still to come.

Shares of global digital payments platform PayPal (NASDAQ:PYPL) soared this earnings season on strong third-quarter numbers which broadly underscored that this company’s growth narrative remains as robust as ever.

In other words, everything at PayPal is firing on all cylinders, despite slowing economic growth. In 2020, that slowing economic growth will turn into rebounding economic growth, as trade tensions ease and capital spending trends rebound. This rebound in economic activity will add more firepower to an already red-hot PayPal growth trajectory. So will further ramp in Venmo, which is quickly turning into a must-have consumer payments ecosystem.

The result? PayPal’s volumes, accounts, revenues, margins and profits will all sustain big growth in 2020. As they do, PYPL stock — which remains undervalued relative to its growth prospects — will run higher.

Consumer technology giant Apple (NASDAQ:AAPL) had a strong showing this earnings season, and that strong showing added credibility to the idea that the company could be in store for a big 2020.

The story at Apple has been a simple one. For the past decade, the company has been hyper-focused on selling hardware products to consumers around the globe. That hardware business has been slowing because of market saturation issues. In order to combat that slowing growth, Apple has built out a series of subscription software businesses to more deeply monetize its huge install base.

In the big picture, then, Apple is entering a golden era in 2020 wherein both its software and hardware businesses will grow together. This collaborative growth should continue to power AAPL stock to new highs.

As of this writing, Luke Lango was long BBY, T, FB, SSI, WMT, PYPL and AAPL.