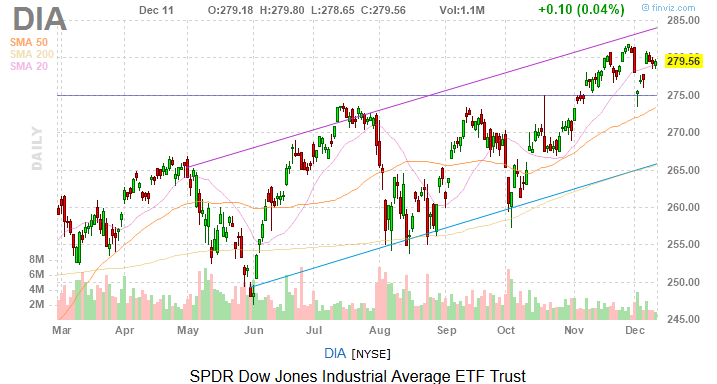 The Federal Reserve met today and, as expected, the central bank didn’t reveal an interest rate reduction. Add to that, the takeaway appears to be that the Fed won’t cut rates next year, but equities liked that news as stocks posted a decent Wednesday rally.

Although the Fed didn’t change interest rates today, the focus on the central bank was a nice change of pace from the trade headlines that have been so dominant in recent days.

“The Committee judges that the current stance of monetary policy is appropriate to support sustained expansion of economic activity, strong labor market conditions, and inflation near the committee’s symmetric 2 percent objective,” said the Federal Open Market Committee (FOMC) in a statement.

For those rooting for more rate cuts, such as President Trump, the Fed’s comments today probably aren’t good news. More importantly, the commentary from the central bank should be seen as positive and, stocks reacted as such, because the Fed sees the U.S. economy on firm enough ground right now that lower borrowing costs aren’t necessary.

It may take a while for the lack of an imminent rate cut to sink in as a positive, but it was enough to have 17 of the 30 Dow stocks higher in late trading.

As noted above, Home Depot was the Dow’s trouble spot today. The home improvement retailer said it expects sales to increase by 3.5% to 4% next year, below the consensus estimate calling for 4.3% growth.

“We are building on our distinct competitive advantages to capitalize on a large and fragmented market opportunity,” said CEO Craig Menear in a statement.

Home Depot forecast “diluted earnings-per-share growth of approximately 3.1 percent from fiscal 2018 to $10.03.” Shares of Home Depot are down more than 7% this month.

Chevron (NYSE:CVX), the second-largest domestic oil company, was the second-worst Dow performer today after Home Depot. The oil giant slipped 1.4% after saying it’s writing down $11 billion worth of assets.

“We believe the best use of our capital is investing in our most advantaged assets,” said CEO Michael Wirth in a statement. “With capital discipline and a conservative outlook comes the responsibility to make the tough choices necessary to deliver higher cash returns to our shareholders over the long term.”

Chevron also said it’s planning $20 billion in capital expenditures for 2020 — the third straight year the company has held spending flat at that level.

Apple (NASDAQ:AAPL) was one of the Dow leaders today as another analyst chimed in about the company’s leverage to the consumer and the holiday shopping season, including, of course, the iPhone and AirPods.

Evercore ISI analyst Amit Daryanani “thinks investors should get ready for the tech giant to return to growth again in 2020. He also sees upside to December quarter sales estimates, given signs of a robust holiday season for AirPods Pro and iPhone 11,” reports Barron’s.

In talking about Dow stocks and good news, these days it’s hard to avoid mentioning Disney (NYSE:DIS). Whether it’s at the box office or at its theme parks, Disney is simply a juggernaut, but let’s not forget about streaming. The recently unveiled Disney + streaming service is off to a stellar start.

“Disney+ has been downloaded 22 million times on mobile devices since the launch of the streaming service in November, according to a report by research firm Apptopia,” reports Reuters.

That’s after Disney + landed 10 million subscribers on day one, so its subscriber base has more than doubled in less than two weeks.

With the Fed clearly optimistic about the state of the U.S. economy and as the business cycle enters it latter stages, investors may want to consider growth stocks, of which the Dow is home to several.

“Value has recorded multiple years of underperformance relative to growth and the broader market, and it remains mired in an unfavorable cyclical trend,” said State Street in a recent note. “Dissecting the US by sectors also reveals a dichotomy between market leaders and laggards … [g]rowth sectors like Technology, Communication Services, and Consumer Discretionary have all hit all-time highs in 2019.”