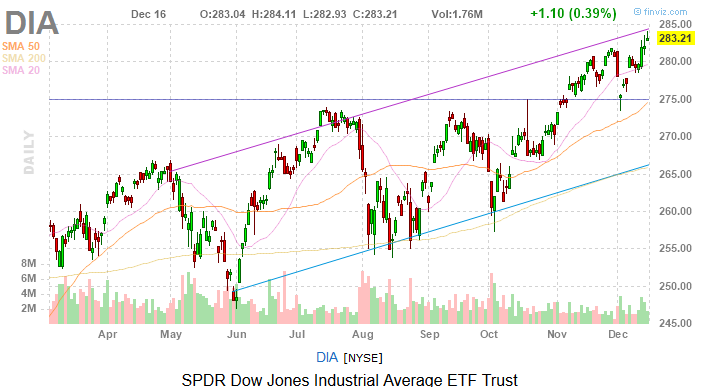 Considering that Phase I of the U.S.-China trade deal is mostly in the rear view mirror and that there weren’t marquee earnings reports or headlines from the Federal Reserve to analyze, Monday was a brisk day on the stock-specific headline front. But broader indexes rallied on follow through on last week’s trade news.

Technology and healthcare, the two largest sector weights in the S&P 500, were the leaders today, helping the benchmark U.S. equity gauge gains for the seventh time in the past nine days. There was one domestic data point of note out today.

“The National Association of Home Builders/Wells Fargo Housing Market Index jumped 5 points to 76, the biggest monthly increase since the end of 2017, and the November figure was revised higher, according to data released Monday,” reports Bloomberg. “The reading topped all estimates in a Bloomberg survey of economists that had called for 70.”

That helped Home Depot (NYSE:HD) join the ranks of the Dow winners as the home improvement retailer gained almost 1%.

Speaking of consumer discretionary names, will likely be tested Friday when the Commerce Department delivers a revision of the third-quarter GDP number.

In late trading, 28 of the Dow’s 30 components were in the green.

UnitedHealth is a name that has been mentioned plenty of times in this space over the course of 2019. For much of this year, the news hasn’t been good, but in recent months, the managed care provider has really perked up and more analysts growing bullish on the name heading into 2020.

Fanning the flames of UnitedHealth’s rally today, Goldman Sachs added the stock to its conviction buy list, noting that although 2020 is a presidential election year, healthcare sector valuations are compelling and Medicare For All Risk is declining.

Goldman has a “buy” rating on UnitedHealth with a $330 price target, implying upside of nearly 13% from where the stock was trading late Monday.

Staying in the healthcare sector for a moment, Pfizer (NYSE:PFE) was the second-best performer in the Dow today behind only UnitedHealth. The blue-chip pharmaceuticals name rallied 2% after the company announced an almost 6% hike to its quarterly dividend, taking the pay to 38 cents a share from 36 cents.

Shares of Disney (NYSE:DIS) advanced again today, cementing the stock’s status as one of the Dow’s best in 2019. Streaming news was again at play as the shares jumped on news Disney will bring its Disney+ streaming service to France in March. Another catalyst is imminent as the next “Star Wars” movie debuts later this week.

As I noted last week, there’s one Dow earnings report to watch for this week and it comes courtesy of Nike (NYSE:NKE). The company reports on Thursday, Dec. 19. In advance of that report, there was some bullish options activity in the stock today.

“At last check, already over 37,000 calls have changed hands, four times the expected intraday amount and double the average daily volume,” according to Schaeffer’s Investment Research. “Most of this action is occurring at the December 102 call, where new positions are being opened, and looks tied to stock. There are also new positions being opened at the weekly 12/27 99-strike call.”

An Upgrade for Goldman

As noted above with UnitedHealth, stocks often move on upgrades from Goldman Sachs (NYSE:GS), but shares of the investment bank were on the move today after Citigroup upgraded the stock to “buy” from “neutral” while boosting its price target on the name to $255 from $220.

Separately, Goldman said it will curb lending to coal companies and oil drillers operating in the Arctic, becoming the latest big-name company to prioritize climate change.

Just a few Dow stocks were in the red today, but Boeing (NYSE:BA) was by far the worst offender, shedding 4.1%. There were reports out earlier today that the company is considering production cuts or an outright suspension of the troubled 737 MAX passenger jet.

Boeing is lower by almost 6% this month and with any more headline risk, the stock could give up its 2019 gains (just under 6%) before the end of the year.

Bank of America’s widely followed survey of global fund managers is due out tomorrow and some are forecasting bullish musings in there. As it is, the bank is forecasting a “melt up” for stocks in the first quarter of 2020.

Although central banks may not be able to affect equity markets in 2020 on par with 2019, there are still plenty of endorsements for riskier assets, such as cyclical equities, heading into the new year.