U.S. stock futures are trading slightly in the red this morning, but not enough to worry bulls.

In the options pits, call volume made a comeback while puts continued their trend of playing second fiddle. Until volatility ramps up or bears can wrest control of this sleepy market, I expect more of the same into Christmas. By day’s end, some 21.6 million calls and 15.9 million puts changed hands.

The complacent backdrop for equities delivered another extremely low rating in the CBOE Volatility Index (VIX) single-session equity put/call volume ratio, which fell to 0.49 — its third-lowest reading of the year. Meanwhile, the 10-day moving average held steady near 0.57 for a second day. 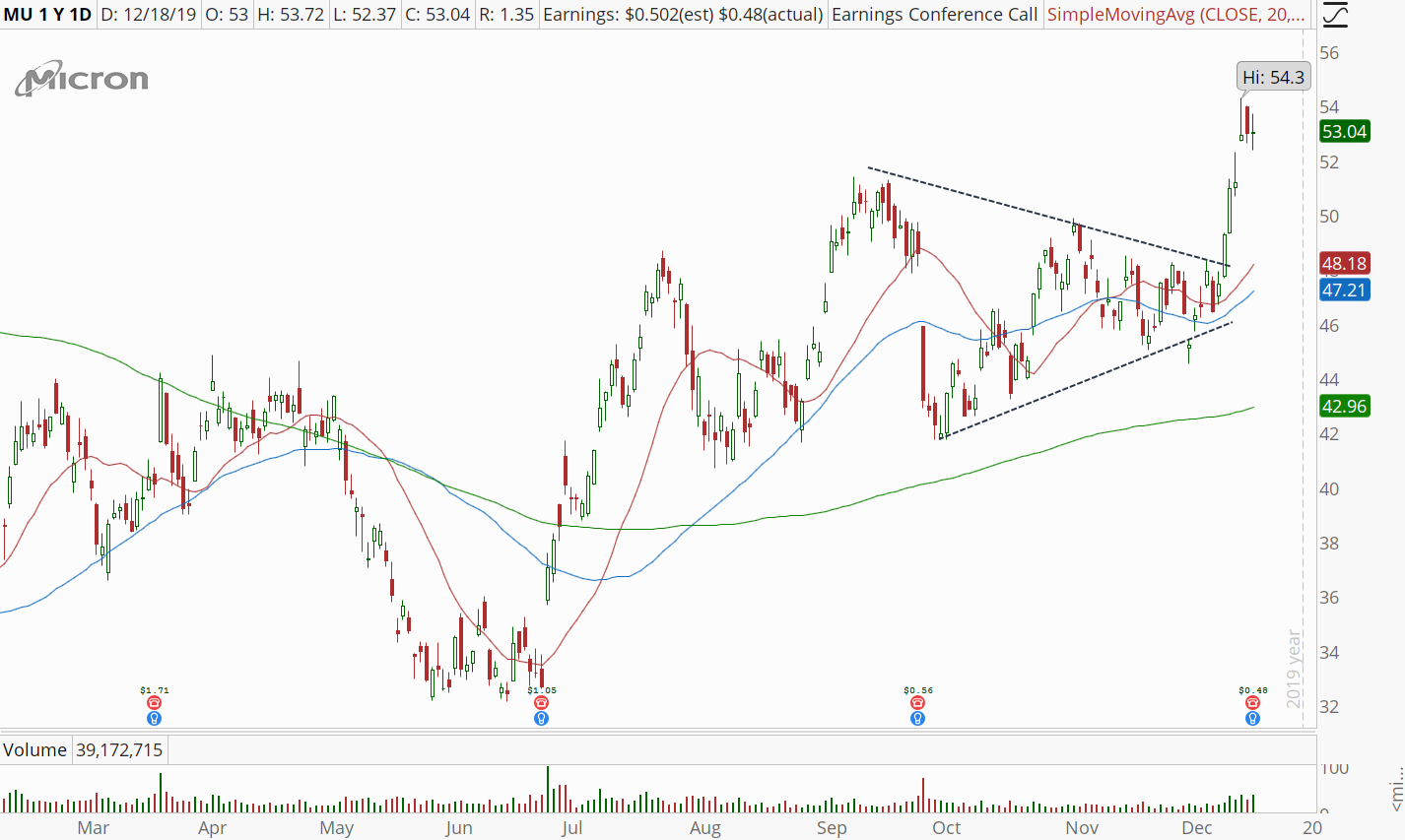 Micron shares entered last night’s earnings report hot as a pistol. A groundswell of buying boosted the chip stock to a 52-week high showing broad institutional demand going into the number. Fortunately, the boom was justified.

For the prior three months, Micron raked in earnings of 48 cents per share on revenue of $5.1 billion. Both measures bested analyst estimates and have MU stock rising 3.5% in pre-market trading.

Micron’s price trend boasts a rising 20-day, 50-day and 200-day moving average which confirms buyers’ reign across all time frames. The influx in volume during this month’s breakout also bodes well for the stock going forward.

Premiums were pricing in a move of $3 or 5.7% ahead of the event, so this morning’s 4.2% gap up falls well within expectations. Look for a modest volatility crush at the open to send implied volatility to the basement with virtually every other stock in the market.

If you’re willing to bet on continued strength after today’s earnings beat, then sell naked puts. 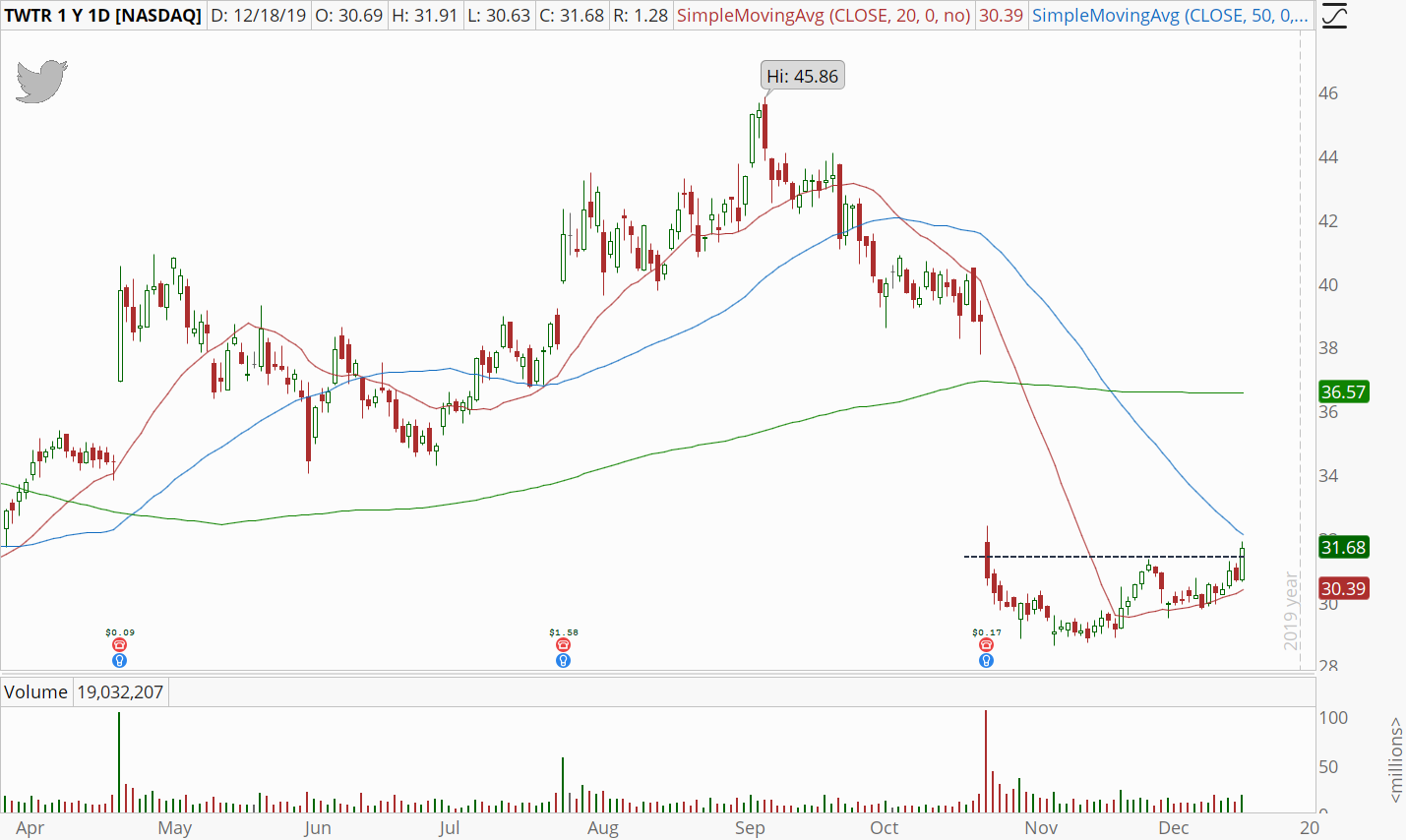 Twitter was one of the largest gainers in the technology sector Wednesday. The rally carried TWTR stock to the top of what has become a rounded bottom pattern, and it’s now poised to push above the 50-day moving average for the first time since September. Volume climbed well above average to 19 million shares, suggesting institutions were entering the fray.

The massive unfilled gap from October’s disastrous earnings report looms overhead. If it begins to fill, we could see swift upside movement since there isn’t any resistance. I wouldn’t be surprised if buyers held their enthusiasm in check until January’s earnings release, however. Some may want to see that the last quarter was a one-off and not the beginning of Twitter’s fundamental decline.

Buyers took to the options market to express their enthusiasm for the rally. Calls dominated the day, accounting for 77% of the take. Total activity ramped to 196% of the average daily volume, with 174,733 contracts traded.

Implied volatility continues to languish at the lower end of its 52-week range. It’s at 33% or the 9th percentile and is baking in daily moves of 66 cents or 2.1%, so set your targets accordingly.

If you think TWTR stock tries to push into its gap area ahead of next month’s earnings, then long call spreads are a cheap bet here. 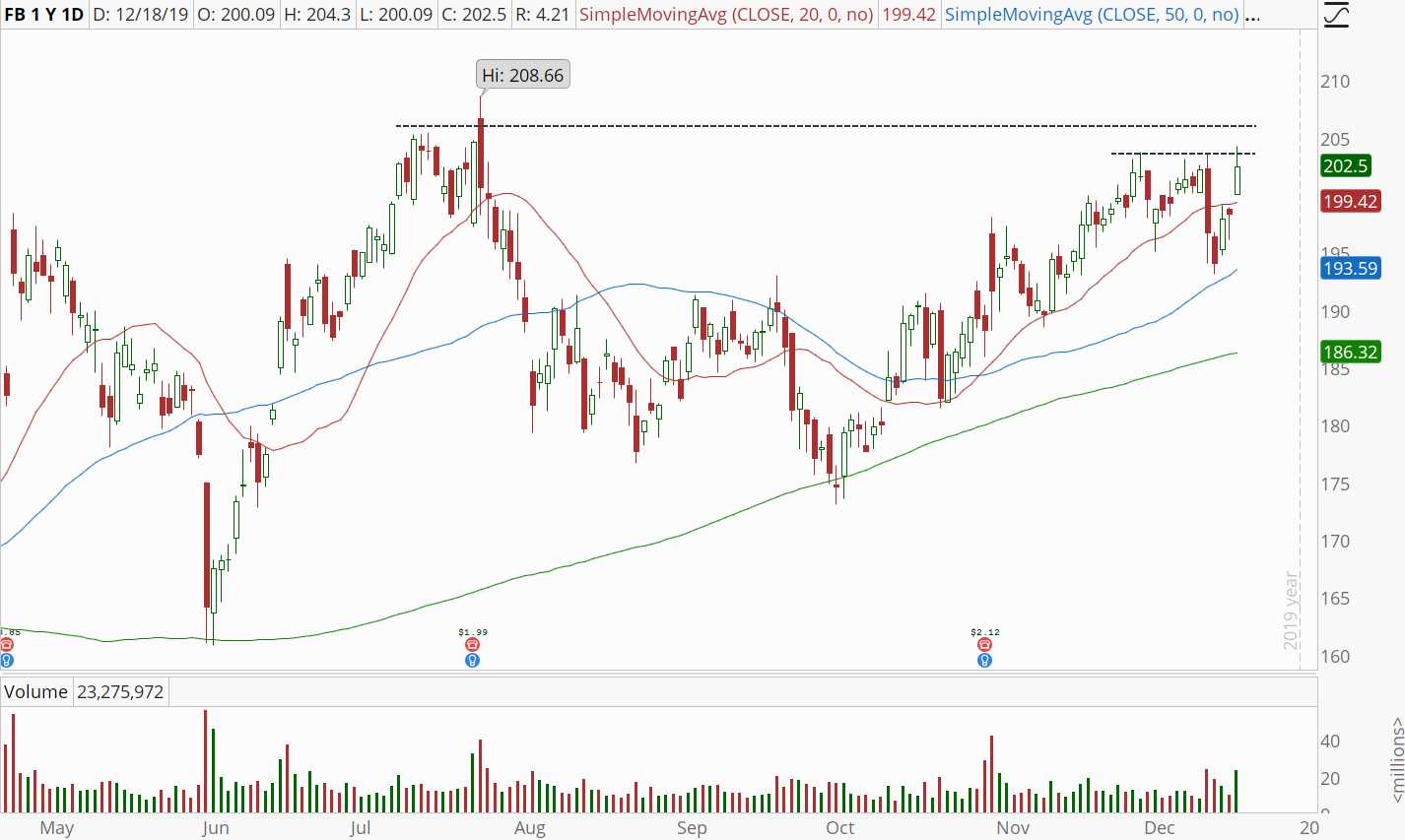 Twitter wasn’t the only stock embraced by bulls yesterday. Facebook saw its largest volume up day of the quarter, with over 23 million shares traded. Though the gains were slashed by the closing bell, FB stock still climbed 2.1% to test its next resistance level.

The $203 area halted the last few rally attempts, so a break above it would mark a bullish change in character. With the tech sector firing on all cylinders and pushing higher into Christmas, it’s highly likely FB retests its 52-week high in the weeks to come.

The action on the options trading front mirrored Twitter with calls outpacing puts by three to one. Activity grew to 203% of the average daily volume, with 424,056 total contracts crossing the tables. 75% of the trading came from call options alone.

Implied volatility remains extremely low at 23% or only the 7th percentile of its one-year range. With stocks facing a holiday-shortened and historically bullish stretch over the coming month, complacency reigns supreme.

Since out-of-the-money puts trade cheap, I prefer buying calls as the mechanism for bullish bets if you’re inclined to play FB here.