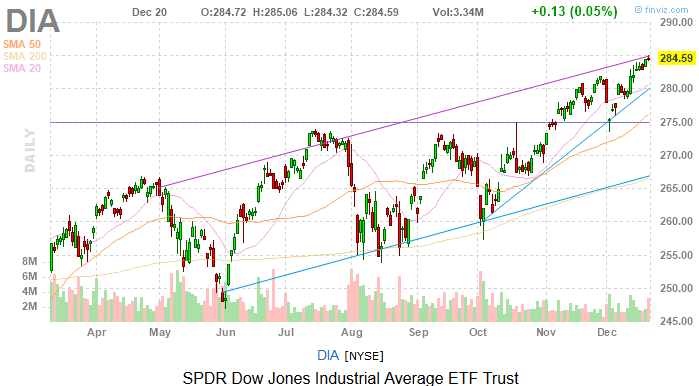 Stocks advanced to close the week amid a slew of favorable economic data points and as President Trump said a formal signing of Phase I of a trade accord between the U.S. and China is being arranged, allaying fears that the agreement would be delayed.

Important consumer data out earlier today indicated that household spending climbed 0.3% last month following a 0.1% increase in October, according to the Commerce Department.

Additionally, the University of Michigan consumer sentiment reading for December rose for a fourth straight month while personal incomes gained 0.5% in November, easily beating estimates calling for a 0.3% increase.

Overall, the data look good and that helps stocks, explaining why in late trading, 25 of the 30 Dow components were spotted higher.

As noted above, Merk has been in style this week. Today, the pharmaceuticals name rallied 1.66% after the U.S. Food and Drug Administration (FDA) approved Merck’s ERVEBO, a treatment for the deadly Ebola Zaire virus.

Approval of this vaccine by the FDA represents another important milestone in the global response to Ebola Virus Disease and stands as a tremendous accomplishment by a unique global partnership,” said Dr. Roger M. Perlmutter president, Merck Research Laboratories, in a statement. “In acknowledging this event, I wish in particular to recognize the heroic efforts being made by frontline responders to the ongoing outbreak in the Democratic Republic of the Congo. We are proud and honored to play a role in supporting their vital activities, and we remain focused on the important work ahead.”

Apple (NASDAQ:AAPL) was the Dow’s smallest gainer after Piper Jaffray analyst Michael J. Olson was out today reiterating an “overweight” rating on the stock while lifting his price target to $305 from $290, citing expected demand from next year’s 5G upgrade cycle.

“While still three quarters away, the 5G iPhone’s integration into the investor narrative around Apple shares is well underway,” said the analyst. “We see this as a strong level of interest given limited 5G marketing chatter to date and the high price point used in our survey.”

Talk of 5G upgrades and Apple could be one reason why Verizon (NYSE:VZ) was tussling with Merck for top honors in the Dow today. Verizon sprinted higher by 2.1% on heavy volume and light news flow.

Microsoft (NASDAQ:MSFT) has been one of the Dow’s stars this year and while it may not gain another 50% next year, 2020 is still setting up to be a strong year for the mega-cap technology name.

“Microsoft is increasingly being viewed as a strategic technology partner as evidenced by customers making long-term commitments,” said J.P. Morgan analyst Mark Murphy in a note out today.

The analyst notes essentially all of Microsoft’s revenue growth is organic, indicating the company is offering value to established customers and is getting those customers to add new products and services.

After the close of U.S. markets Thursday, Nike (NYSE:NKE) delivered fiscal second-quarter results that beat estimates. The company said it earned 70 cents a share on sales of $10.3 billion. Wall Street was expecting 58 cents per share and revenue of $10.09 billion.

Investors weren’t satisfied though as the stock fell 1.2%. The company forecast revenue growth for the current quarter, which ends in February, of high single digits.

These days, it’s hard not to mention Boeing (NYSE:BA) in this space and it’s probably even harder to find some good news about the aerospace giant. The shares slid 1.6% Friday on bad news that doesn’t pertain to the controversial 737 MAX jet.

Rather, Boeing was punished today because the company canceled “plans for its CST-100 Starliner to rendezvous with the International Space Station on the capsule’s debut flight, raising doubts over whether the company will be able to ferry astronauts to the orbiting laboratory next year,” reports Bloomberg.

We’re not quite into 2020, but it’s never too early for getting a reading on how earnings could shape up in the new year. Right now, the outlook is solid. Whether or not stocks will reflect as much as the calendar turns to 2020 is a different matter.