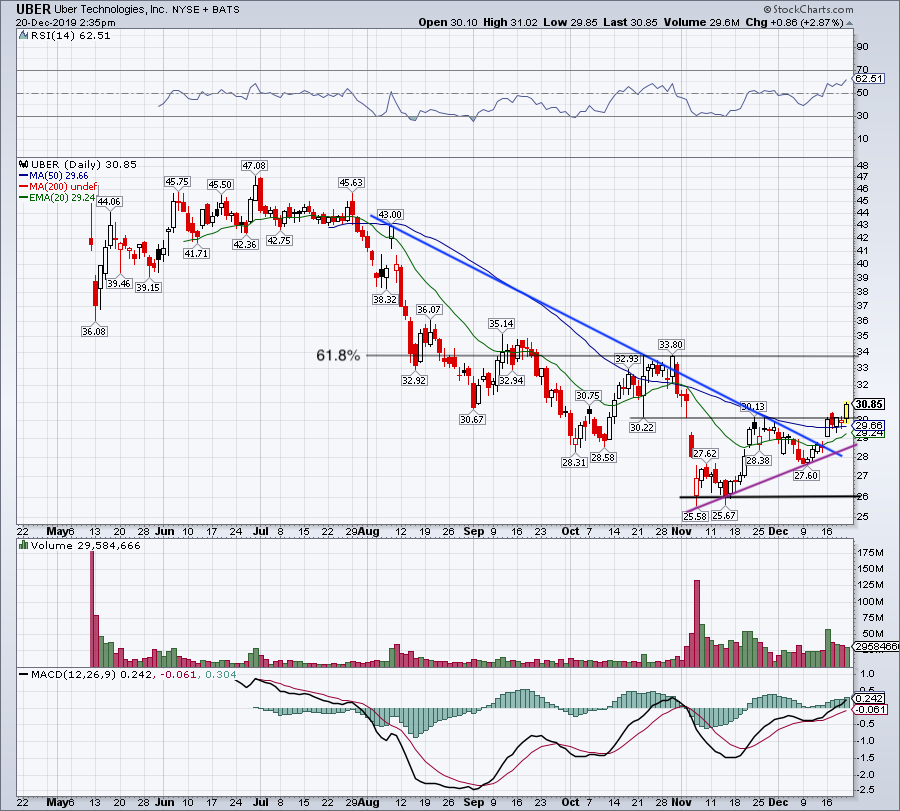 U.S. equities made another new high on Friday — and no, I didn’t just copy and paste that from every other day this week. That said, it’s pretty clear bulls are in control at the moment. Let’s look at a few top stock trades for Monday, the last full trading day before the holidays.

It’s a Christmas miracle, with Uber (NYSE:UBER) finally putting together some bullish developments.

Earlier this month, the stock notched a higher low, allowing us to draw an uptrend mark (purple line) on the chart. Then it pushed through the 50-day moving average and the $30 level.

Obviously the stock still has a lot to prove, but it’s making positive steps. It’s also a great example of why traders should keep an open mind and do their best to approach each stock without a bias. 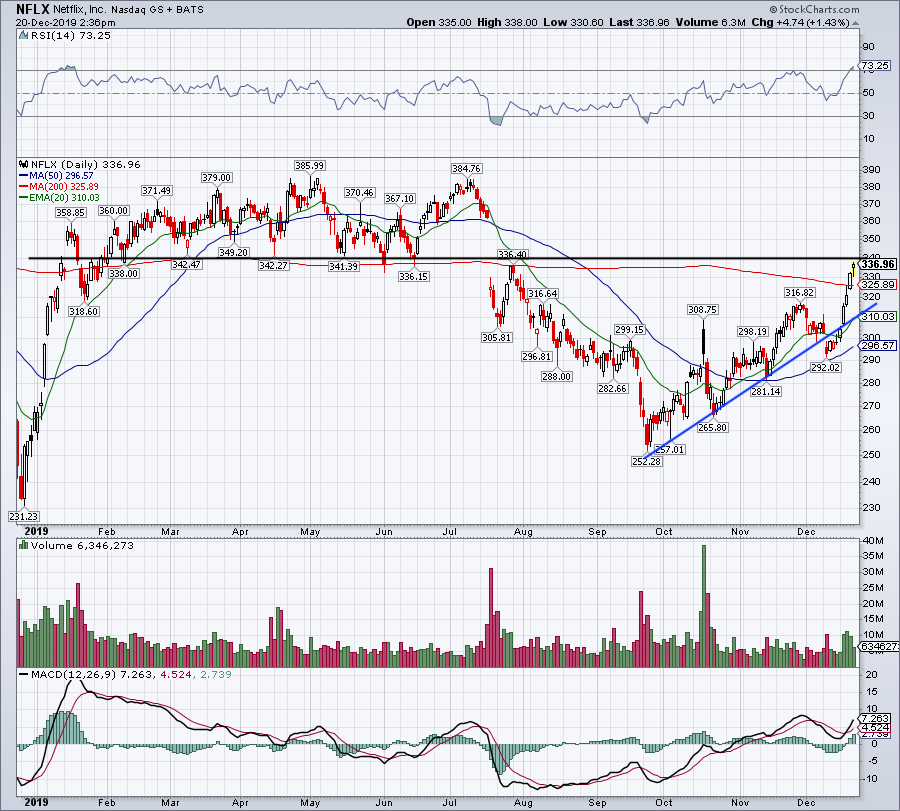 Man, Netflix (NASDAQ:NFLX) has been on a tear lately. Just earlier this month, it was flirting with a breakdown below $290. Now up near $336, the rally has added almost $50 to the stock price.

Is it running out of gas?

Earlier this year, the $340 level was big-time support, along with the 200-day moving average. NFLX didn’t have much trouble reclaiming the latter, but as it nears the former in an overbought condition, prudent bulls are surely raising stops and booking some profits.

If NFLX surges through $340, a gap-fill up near $360 will surely be bulls’ preferred target. If $340 is resistance, see if the 200-day moving average acts as support. Below puts uptrend support in play. 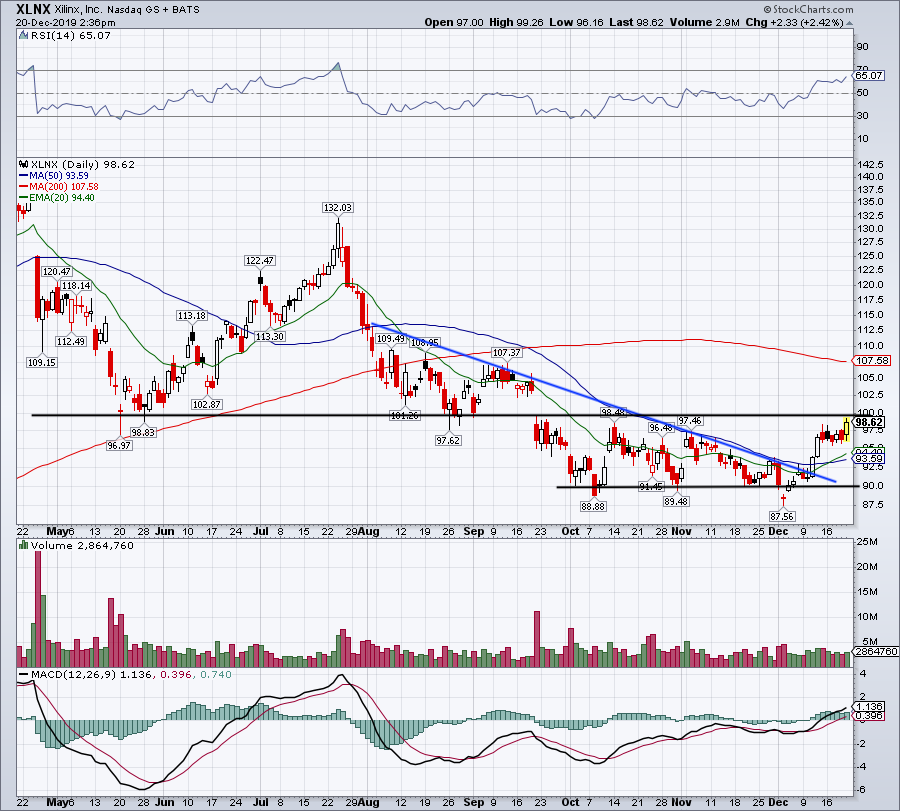 Not one we visit with often, but Xilinx (NASDAQ:XLNX) was popping up on traders’ radars Friday.

After breaking out over downtrend resistance earlier this month, shares have been consolidating in a tight range between $96 and $97.50. Moving out of it now, it faces a big test of $100.

Over that mark, and bulls will look to fill the September gap up toward $103, then possibly take shares up to the 200-day moving average. 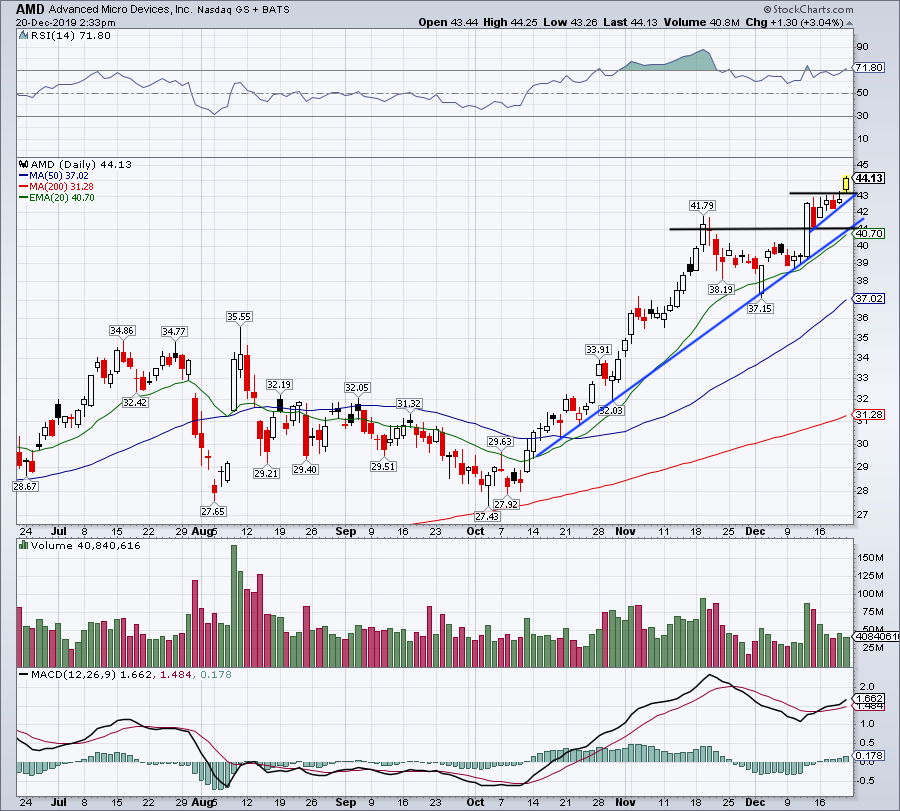 Advanced Micro Devices (NASDAQ:AMD) continues to make beautiful move after beautiful move. The latest comes on Friday, as shares break out of a bullish pennant and race to new highs.

From here, AMD could kickstart another rally, possibly above $45. The higher it goes, the more traders are going to be pushing for $50.

On a pullback, though, see that it finds support from the rising 20-day moving average and uptrend support (blue line). Below that and the prior high area between $41.79 and $41 needs to support AMD. Otherwise, it may need more time to consolidate.

Until then though, let’s try not to get too bearish. The whole market has been strong and being too early to the party — either bulls on a pullback or bears on a rally — can result in a nasty burn to the ego and the brokerage account. They say “don’t fight the trend” for a reason.