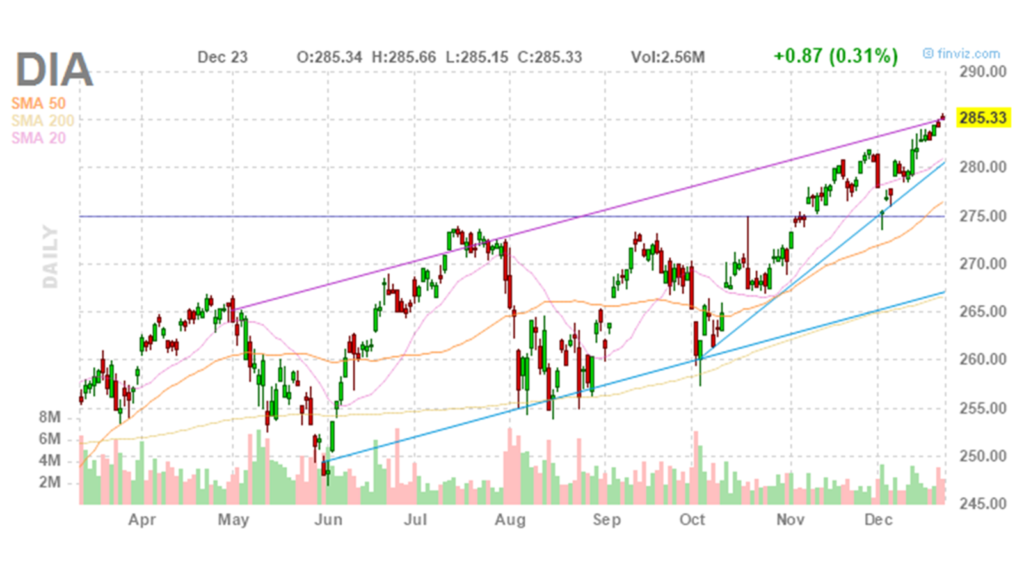 It’s almost Christmas and stocks added some cheer for investors on Monday, moving higher on light volume after China’s Ministry of Finance released a list of nearly 860 American products, including technology components and agriculture goods, that will be subject to lower tariffs.

The China tariff reductions don’t pertain exclusively to the U.S., but is a sign the world’s second-largest economy is looking to avoid future trade spat. That is important to the U.S., particularly if there is any hope of building on Phase I of the trade deal between the two sides in 2020.

“China’s import growth has stalled this year amid the broader slowdown in the economy, helping to widen the trade surplus,” according to Bloomberg. “As part of the phase one trade deal agreed with the U.S. this month, the nation has committed to ramping up purchases from there by as much as $200 billion over the next two years.”

Surprisingly, it was mixed day for the Dow’s consumer stocks, although Saturday reportedly saw the largest ever, one-day retail sales — $34.4 billion — in U.S. history. Here’s to waiting till the last minute for holiday shopping.

Be Careful With Boeing

As noted above, Boeing rallied on news that Dennis Muilenburg has been ousted as chief executive officer. Chairman David Calhoun will take on the top executive spot and while the management shuffle removes some headwinds for Boeing, some market observers remain leery of the stock.

Muilenburg is paying the price for Boeing’s slow response to issues with the 737 MAX passenger jet, and the bad public relations that came along with two fatal crashes involving that plane. However, just because he’s out the door, that doesn’t mean those Boeing woes are following him.

“The Muilenburg departure, after all, doesn’t give any definitive answer about when the plane will be cleared to fly again,” reports Barron’s. “It also doesn’t help investors judge what will happen when the MAX returns to service. Will people get back on the plane?”

As has been widely noted over the course of 2019, Disney (NYSE:DIS) is one of the best-performing Dow stocks and the box office is a big reason why. So it may come as some surprise that the stock traded lower today following the opening weekend of “Star Wars: The Rise of Skywalker.”

All the latest installment of that franchise did was haul in $175.5 million, but that clearly wasn’t enough for Wall Street and it doesn’t appear Star Wars devotees are enthusiastic about the movie given its tepid Rotten Tomatoes and CinemaScore rankings.

Apple (NASDAQ:AAPL) does much, much more than hawk those expensive air phones. But, those tiny items are proving to be big business this holiday season and the stock is reacting to that effect.

Toni Sacconaghi of Bernstein said in a note out last Friday that Apple could sell 85 million AirPods next year, potentially offering a material impact on the company’s top and bottom lines.

“If completed, those sales would generate $15 billion and contribute 3.5% to the company’s total revenues, coming in $4 billion to $8 billion higher than consensus estimates,” according to Barron’s.

Exxon Mobil (NYSE:XOM) added 0.5% to join the Dow winners after the company said it commenced output from the Liza field offshore Guyana ahead of schedule.

“Production from the first phase of the Liza field, located in the Stabroek Block, is expected to reach full capacity of 120,000 barrels of oil per day in coming months, and the first cargo is set to be sold within several weeks,” according to Exxon.

Expect a slow on Tuesday, as it’s Christmas Eve, and probably some light volume from now through year end. Some Dow-specific themes to watch over the next week so are how this year’s winners, like Apple, close out the year and how some of the laggards are shaping up entering 2020.