The rally in U.S. equities continues this morning with stock futures trading firmly in the green.

The holiday cheer continues to spill into the options pits, with calls heavily favored over puts. Specifically, about 17.9 million calls and 10.9 million puts changed hands on the session. Fear is nowhere to seen, and bears are hunkered down in their hidey-hole.

The action at the CBOE Volatility Index (VIX) confirms fear’s demise with the single-session equity put/call volume ratio plunging to 0.43 — a 52-week low. Meanwhile, the 10-day moving average is following suit, dropping to its lowest levels of the year at 0.51. 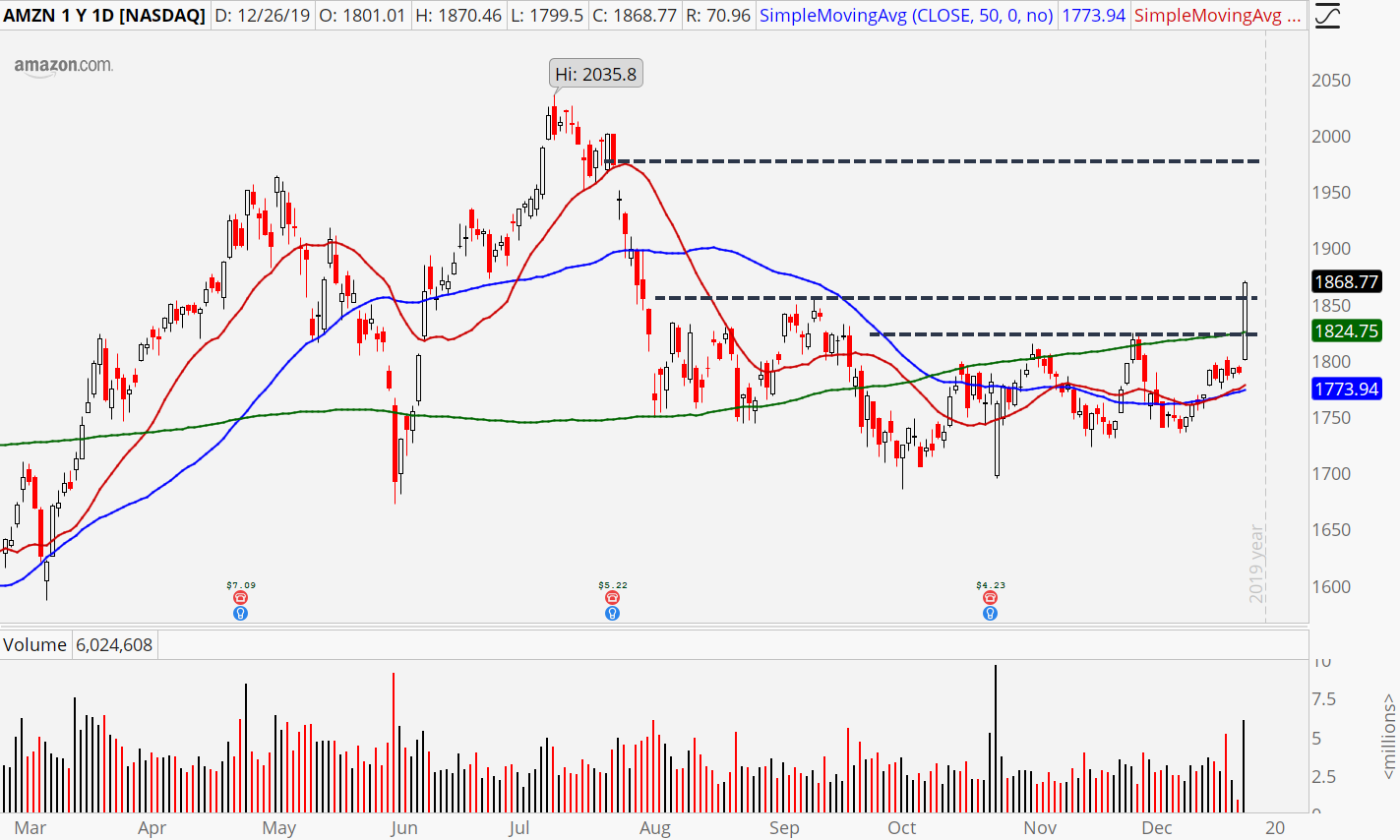 The reign of underperformance and persistent disappointment in Amazon shares has ended. Thanks to a record-breaking holiday season, AMZN stock awoke on Thursday in a big way. After issuing a press release highlighting the broad strokes of the shopping boom, AMZN shares rocketed $80 or 4.5% higher to a new five-month high.

Resistance levels that previously held firm melted during the fiery flight marking a massive change in character. The best thing about the technical posture is we now have room to run until $1,975 — another $100 of upside.

On the options trading front, traders chased calls throughout the session. Activity swelled to 308% of the average daily volume, with 542,994 total contracts traded. 70% of the trading came from call options alone.

The increased demand lit a fire under implied volatility, driving it back up to 25%. With the metric now perched at the 23rd percentile of its one-year range, traders are baking in daily moves of $29.40 or 1.6%. 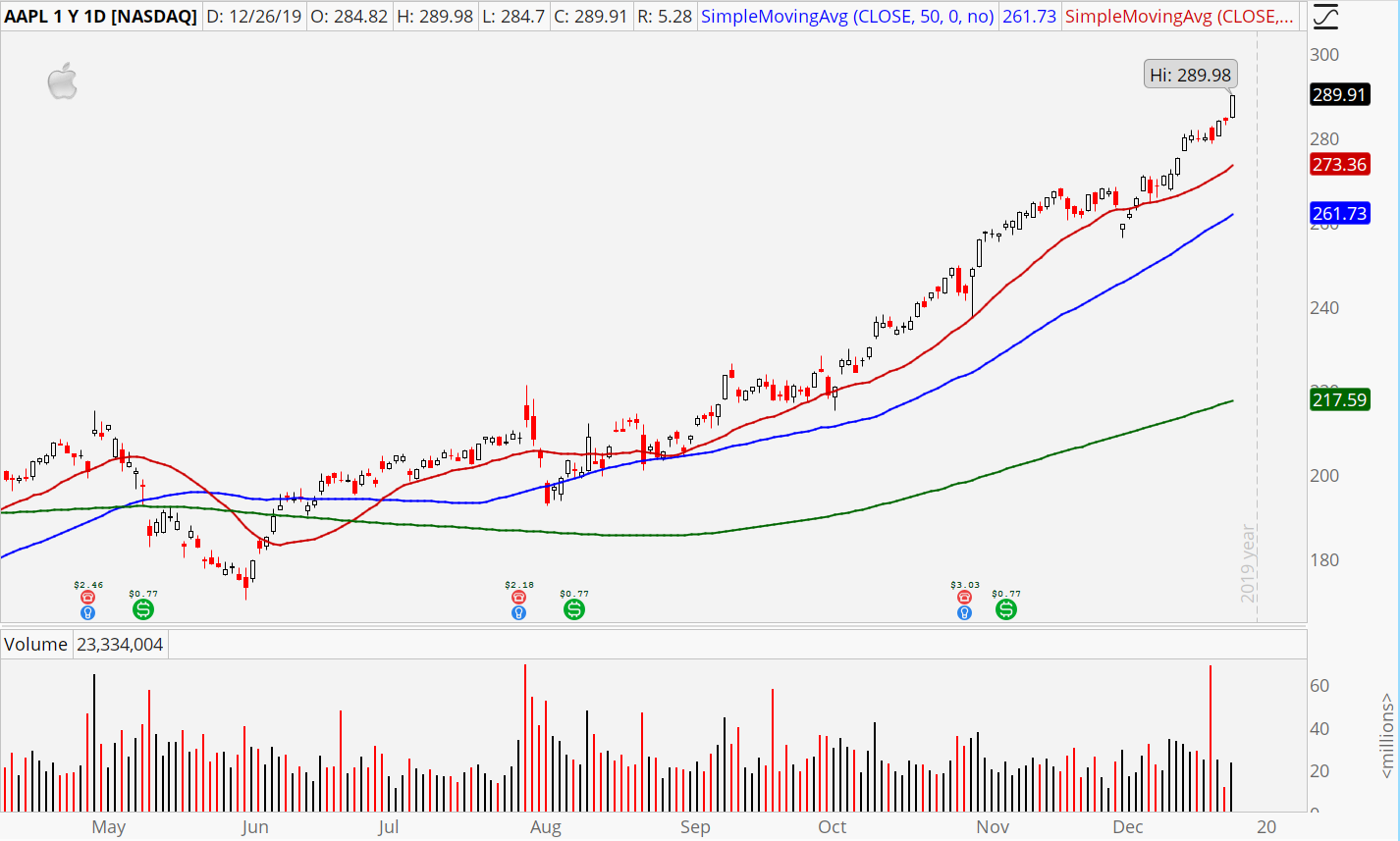 While Amazon finally joined the rally, Apple never left it. In fact, the tech titan has arguably been leading the Nasdaq to the moon since August. The performance chasing into year-end is accelerating an already red-hot trend. AAPL stock was up 2% Thursday and is gaining another 0.5% in pre-market trading. That brings year-to-date gains for the maker of all i-Things up to 84%.

Everything about Apple’s price chart is bullish. Trend, momentum volume patterns — you name it. In the short run, it is becoming overbought, but it’s hard to nail down just when the fuel for the current upswing will run out. In any case, the stock is a rousing buy into any weakness that crops up in the coming weeks.

As far as options trading goes, calls outpaced puts by a wide margin, driving 64% of the session’s sum. Total activity ramped to 142% of the average daily volume, with 757,564 contracts traded.

Demand for derivatives is rising alongside the stock price and now stands at 25% or the 23rd percentile of its one-year range. The expected daily move is $4.55 or 1.6%. Like AMZN, bull call spreads are worth considering here. 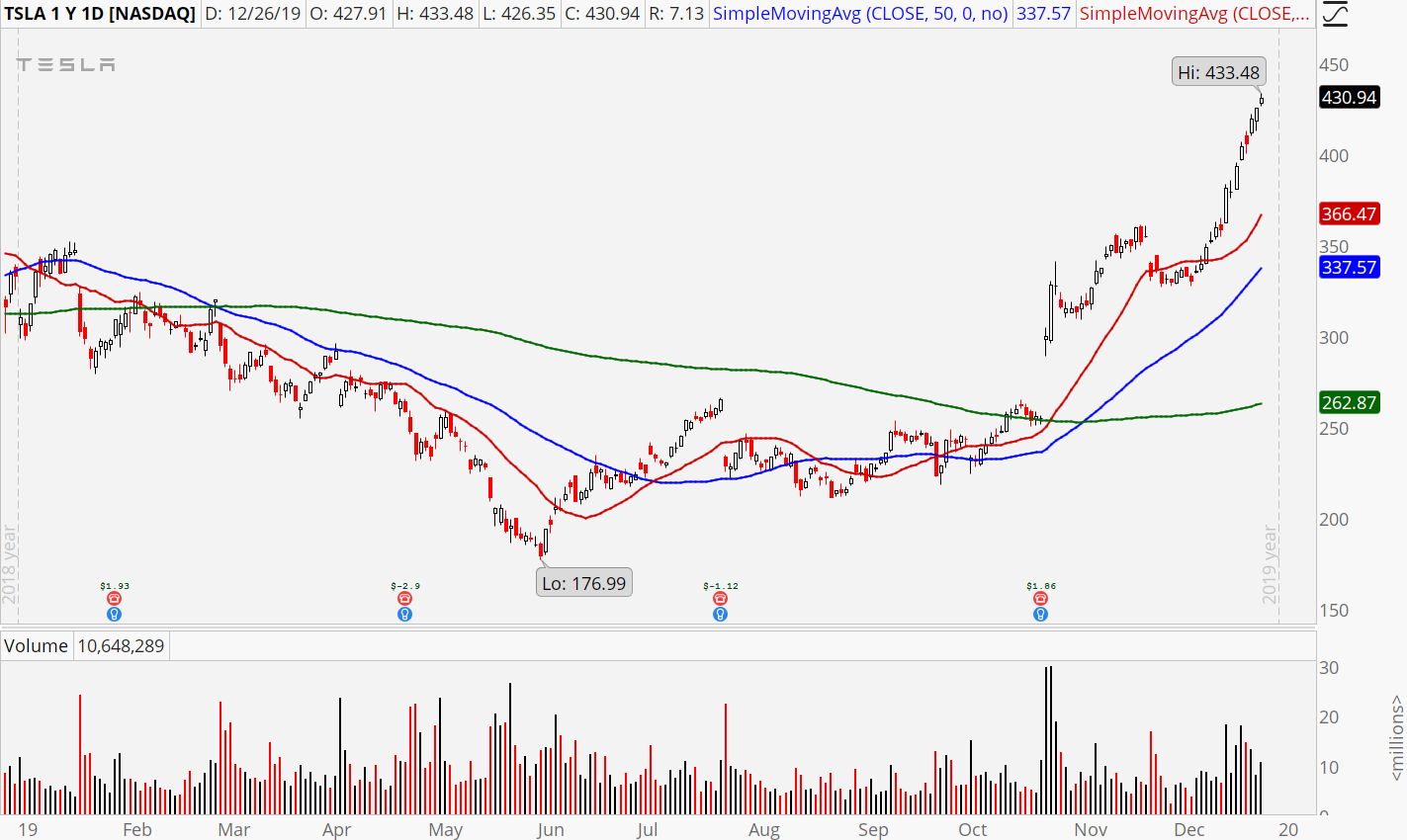 As amazing as AMZN and AAPL have been, Tesla’s ascent this month takes the cake. Bulls wrested control of the stock after earnings in October, hopped in a Cybertruck in November and have been running over bears throughout all of December. Short sellers are suffering the short squeeze of their life, and every single day their pain grows. The stock hasn’t seen a downtick since Dec. 5, and there’s no telling when the advance will end.

There’s no doubt this month’s rally is unsustainable, though. At this pace, Tesla will be at $1,000 by next Christmas. Perhaps the turn of the year will sate the bulls’ appetite. At any rate, I don’t recommend chasing new longs here. The train has long left the station, and entering now just seems irresponsible.

On the options trading front, call demand outstripped puts. Activity grew to 137% of the average daily volume, with 470,661 total contracts traded. Calls accounted for 60% of the take.

As of this writing, Tyler Craig held bearish positions in AAPL. For a free trial to the best trading community on the planet and Tyler’s current home, click here!