The SPDR S&P 500 ETF (NYSEARCA:SPY) and the PowerShares QQQ ETF (NASDAQ:QQQ) both put together modest rallies on the day, but it was enough to take them up to new record highs yet again.

However, bulls shouldn’t get cocky. We all know that the good times eventually end and gravity starts playing a role again. No one is sure when that will come or if a Santa Claus rally will really blow things open in the next week or so, but eventually they will cool.

But Amazon Is the Exception 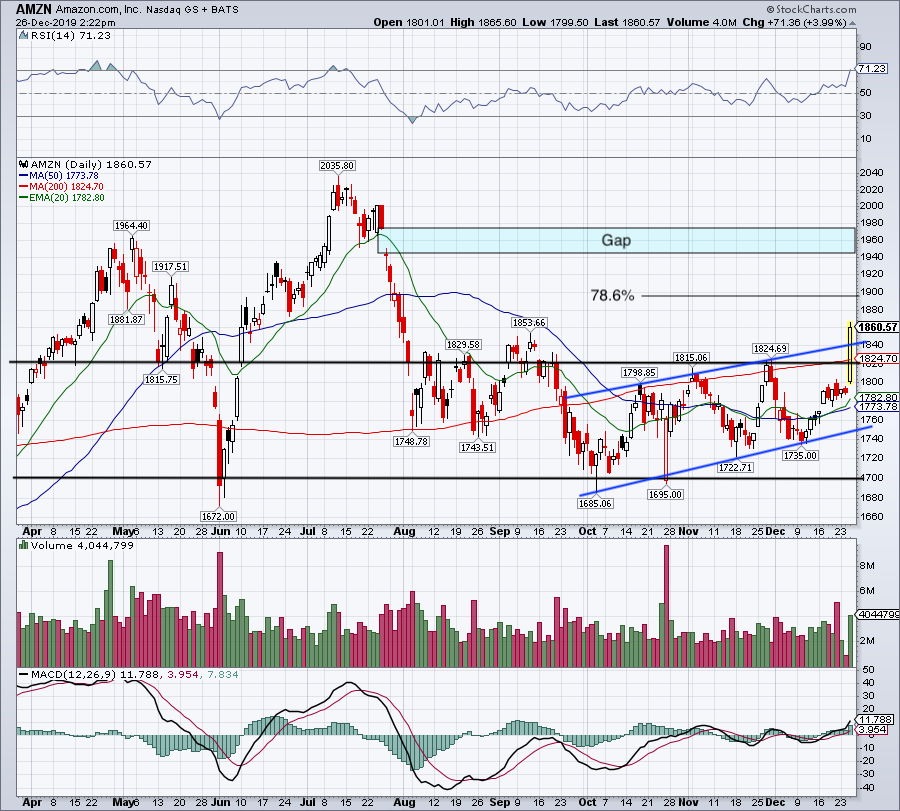 While the overall market has been on fire, Amazon (NASDAQ:AMZN) has been completely absent from the party. It’s lagged the SPY and QQQ, as well as all of its mega-cap tech peers like Apple (NASDAQ:AAPL) and Alibaba (NYSE:BABA).

However, that underperformance could be coming to an end. Shares erupted more than 4% on Thursday and more importantly, cleared numerous levels of overhead resistance. If bulls are able to maintain the stock above these levels, much more upside could be in store in 2020.

So what kickstarted the rally? The company announced that it shipped billions of packages across the globe during the holiday period, while same-day and one-day Prime shipping nearly quadrupled year-over-year. Further, it added 5 million new Prime members and/or trials in just one week.

In other words, the most dominantly positioned e-commerce player likely had a very, very good holiday season.

What’s been up with REIT stocks lately?

A look at retail REITs shows pain, but that’s not too surprising given the above info regarding sluggish brick-and-mortar sales vs. online commerce growth. Still, to see some of these losses in the stock prices in the midst of a bull market and during a strong economy does come as a surprise.

Tanger Outlet (NYSE:SKT) is down 27% this year, while Simon Property Group (NYSE:SPG), considered a very high-quality operator, is off 13%. Further, Taubman Centers (NYSE:TCO) and Macerich (NYSE:MAC) are down 34% and 39% in 2019, respectively.

The carnage goes beyond that, though.

Even crowd favorite Realty Income (NYSE:O) is down more than 11% in less than two months.

Despite the bull market and strong economy, this performance also comes at a time where the Federal Reserve has cut interest rates several times in the past few months. It’s interesting to say the least, although the lack of REIT love may simply be a product of the “risk-on” market we seem to have. Other struggling sectors over the past three months include utilities, telecom and consumer non-durables.

Heard on the Street

Wedbush analysts kept Tesla (NASDAQ:TSLA) at a “neutral” rating but raised their price target from $270 to $370. Tesla’s facility in Shanghai is ahead of schedule and should drive further growth in China. Analyst Dan Ives continues to take a wait-and-see approach, but is closer to buying into Tesla’s turnaround.

Bank of America named Microsoft (NASDAQ:MSFT) a top software pick for 2020 thanks to Azure, gaming and LinkedIn. Its price target was raised to $200 from $162, as the analyst predicts an annual revenue growth of more than 10% going forward.

Thanks to the approval of Allergan’s (NYSE:AGN) Ubrelvy migraine drug, Cowen boosted its price target on AbbVie (NYSE:ABBV) from $90 to $98. The drug has “meaningful potential,” according to analyst Steve Scala, who projects it will achieve revenue of $25 million in 2020 and $375 million in 2025.