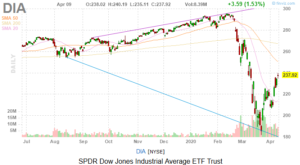 Stocks gained again on Thursday after Dr. Anthony Fauci, director of the U.S. National Institute of Allergy and Infectious Diseases, dramatically pared his COVID-19 fatalities forecast, saying the respiratory illness could claim 60,000 American lives, down from prior estimates of 100,000 to 200,000.

Underscoring the importance of Fauci’s comments, the remarks aided equity markets even as another jaw-dropping batch of initial jobless claims arrived. Last week, the number was 6.6 million, according to Labor Department data released earlier today. That means that over the past three weeks, nearly 17 million Americans filed for jobless benefits.

Importantly, Fauci said in a CBS News interview that he can see life in America returning to normal in the summertime if folks continue adhering to social distancing protocols.

“Yes,” he said, “if we do the things that we need to do to prevent the resurgence.”

Although Fauci didn’t pinpoint a specific date, at this juncture in the COVID -19 battle, even a time frame is helpful for stir-crazy Americans, and it was enough to send 19 of 30 Dow stocks to the upside in late trading.

It Pays to Give Back

Companies can be charitable, but most aren’t known for cutting their customers breaks on pricing, particularly  in the insurance industry. So kudos to Travelers (NYSE:TRV) for joining some rivals and announcing on Wednesday that it’s giving auto policy holders discounts for April and May because so many folks are working from home due to the novel coronavirus outbreak, meaning less driving is taking place.

Travelers is “giving U.S. personal auto insurance customers a 15% credit on their April and May premiums through its new Stay-at-Home Auto Premium Credit Program,” according to the company.

There might be something to being a good corporate citizen because TRV stock was the second-best Dow performer today.

Disney (NYSE:DIS) is one of the Dow stocks hurt worst by the coronavirus outbreak. The company’s theme parks are closed, no one is going to movie theaters and there are no sports for ESPN to air, among other factors.

Along those lines, investors have been waiting for the Disney + streaming service to bring some good news, given streaming is widely viewed as a beneficiary of sheltering in place. That’s clearly happened, as Disney said the streaming platform has hit 50 million paid subscribers worldwide after launching last November.

What’s important about the paid subscribers is that the figure probably doesn’t include the Verizon Communications (NYSE:VZ) customers that are getting Disney + for free for a year, plenty of whom are liable to buy a subscription when their trials expire.

Boeing (NYSE:BA) put together another nice day following a report from UBS saying that if the company pursues help from the government, it won’t be through the Treasury Department, but the Federal Reserve.

Boeing CEO David Calhoun previously said he doesn’t want to borrow from the Treasury if there are strings attached, including giving up equity in the company, but with the Fed buying investment-grade corporate bonds and Boeing still maintaining such a rating, that could be an avenue for the company to pursue.

“Boeing should tap an additional $10B for both its own needs but also to provide a conduit of support to suppliers,” writes UBS analyst Myles Walton. “If this is the path that [Boeing] pursues, the market would likely welcome the avenue of liquidity, but we continue to worry about the hangover of the heavy debt load.”

Reports emerged late Thursday that Caterpillar (NYSE:CAT) is approaching banks for up to $3 billion in liquidity, joining a slew of companies making similar overtures this year. Interestingly, that report comes a day after the company said its dividend will be sustained this year.

Overall, it was a decent though not spectacular day for stocks. As noted earlier and this is a drum I’ve beaten a few times in recent weeks, markets are clearly reacting to coronavirus news. That doesn’t mean reports, including the increasingly gloomy employment picture, are being glossed over, but it is a sign Covid-19 containment is near-term priority number one.