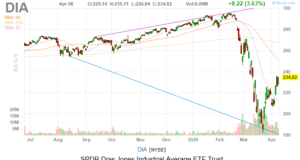 Following a disappointing end to Tuesday’s session, stocks rallied anew on Wednesday amid talk the White House is in talks about reopening the shuttered U.S. economy as the number of coronavirus cases plateaus.

Propelling Chevron Corporation (NYSE:CVX) and Exxon (NYSE:XOM) into the upper tier of Dow winners today was chatter that some of the world’s top crude producers are mulling over output cuts to support flailing prices.

“All participants viewed the near-term U.S. economic outlook as having deteriorated sharply in recent weeks and as having become profoundly uncertain,” according to the FOMC.

Due to a lack of economic data out today, traders were mostly acting on coronavirus news. Although that included 779 fatalities in New York, the number of cases is decreasing, helping every Dow stock besides Walmart (NYSE:WMT) and Disney (NYSE:DIS) to reside in the green in late trading.

Caterpillar (NYSE:CAT) soared Wednesday after the industrial machinery manufacturer said it’s maintaining its annual dividend of $4.12 despite what’s becoming a challenging operating environment for industrial companies of every stripe. Maintaining is different than payout growth, but with so much negative S&P 500 dividend action this year, it’s a positive that Caterpillar will, at the very least, keep its payout steady.

UnitedHealth (NYSE:UNH) was also among the Dow’s leaders today and it’s easy to explain why. Medicare For All supporter Sen. Bernie Sanders suspended his presidential campaign, essentially making former Vice President Joe Biden — who doesn’t seem keen on Medicare For All — the 2020 Democratic nomination.

McDonald’s (NYSE:MCD) traded modestly higher Wednesday and as I noted yesterday, dividend stability and other factors make the stock an interesting rebound idea. That doesn’t mean MCD is going to be a free lunch.

Stifel analyst Chris O’Cull points out today that there are still some risks to consider with MCD, the world’s largest fast-food chain.

A major portion of MCD’s franchise revenue comes from real estate, which is great in the right environment, but challenging when things turn for the worse as they have now due to Covid-19. If franchisee’s ask for lower rent payments or miss those obligations altogether, the company’s top line could be vulnerable to retrenchment.

No relief on the Boeing (NYSE:BA) news front, but somehow the stock gained more than 2% today even as more problems come to light regarding the 737 Max jet’s software.

“As a result of our rigorous software reviews, Boeing is making additional modifications to the 737 MAX flight control computer software after recently identifying two issues,” said Boeing in a statement provided to Barron’s.

Coronavirus news is improving, at least for now, but the only certainties are there no certainties and change is coming. The latter, however, may not be a bad thing with a long-term frame of mind.

“We expect profound implications and changes to geopolitics, technology and capitalism after this crisis,” according to BlackRock. “The bottom-seeking phase will eventually transition into recovery mode, but the world is not likely to return to where it was in January of 2020. We remain students of the market as we put our human and quantitative capabilities to work thinking through the long-term implications.”