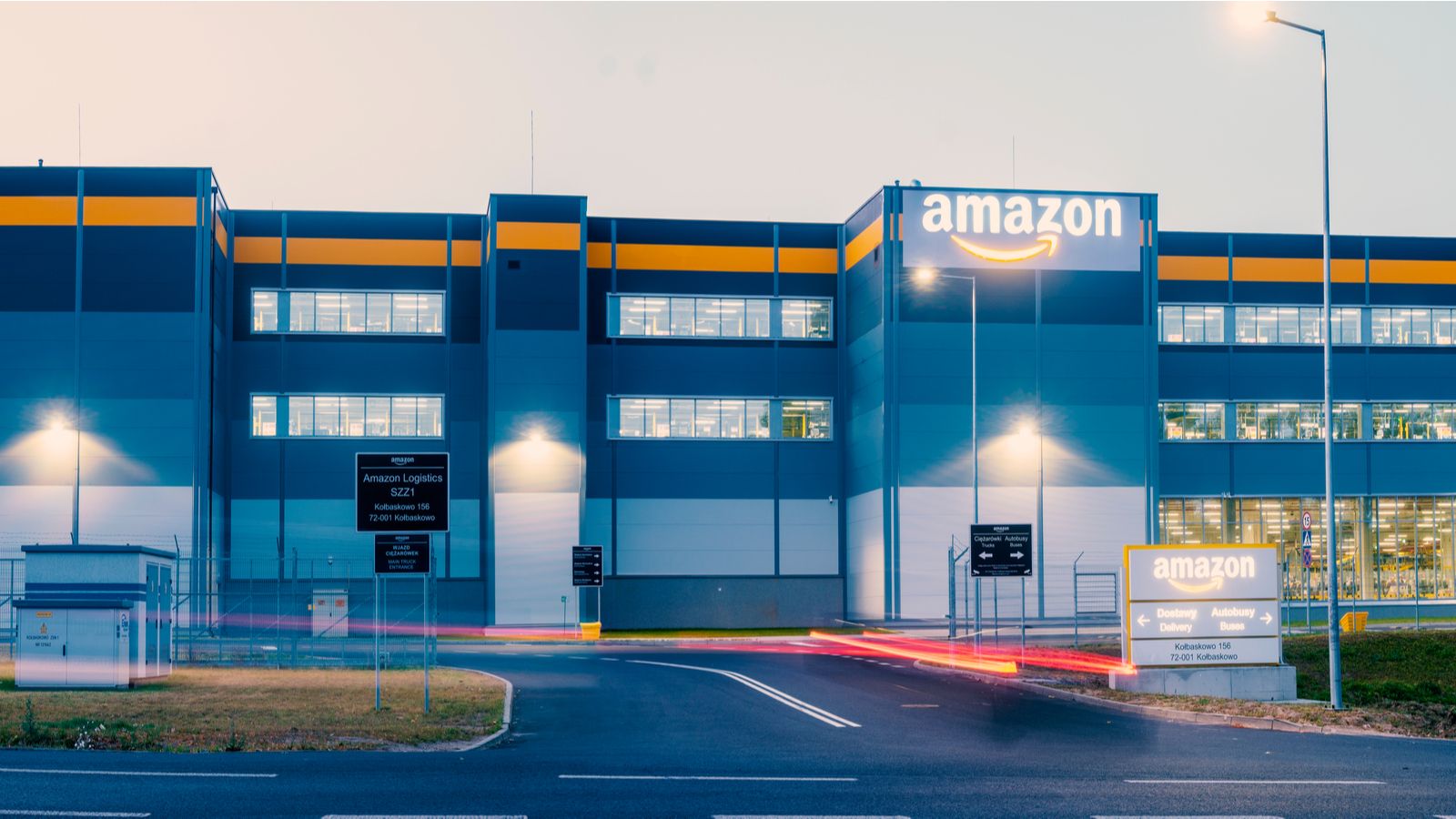 Spoiler alert, Amazon (NASDAQ:AMZN) stock will probably always be a buy in my book, as long as management continues a run of near-perfect execution. This leadership is no fluke; under Jeff Bezos, steady leadership has been a fact for decades.

It is neither a surprise nor a coincidence that AMZN stock hit new all-time highs during this Covid-19 crisis. I am confident that critics of this monster stock are probably dismissing this performance and calling it luck. To that I say that Amazon made its own luck!

If you listen to experts you will likely be wrong. Case in point, last year almost all of them were regurgitating the same meme: ‘you can’t invest in Amazon because this is a spending year.’ My rebuttal to those opinions was that the spending year was in fact the best reason to buy the stock.

On Dec. 13 I shared an opportunity to own AMZN because of said false consensus and I suggested it would set new highs. That was prophetic because when Amazon spends money, it delivers great results.

The stock is now almost 40% and $600 higher. Don’t be afraid to form your own opinions on the matter instead of just believing analyst consensus.

AMZN Stock is a “Buy,” But Pick Your Entry Points

No, I am not a perma-bull because as much as I like the stock, I dislike buying it at or near all-time highs. This is clearly not an obvious point of entry. I understand and subscribe to the concept of buy-high-and-sell-higher, but I bet that AMZN stock will present investors with better entry points than at $2405 per share.

But to be clear on my position, if the stock markets are higher, then so is Amazon. Therein lies the bulk of my concern.

While we are starting to see some countries and even some U.S. states reopening for business, the process will be limited and long. The road to recovery may have started, but we are far from normalcy. Even then, there is tremendous damage to repair.

Although the Jobless Claims reports have been scary, they will probably pale in front of the next monthly Non-Farm Payroll report in the next few weeks. In addition, we haven’t even begun to see the macroeconomic reports from the shutdown. These will likely be horrific.

This is all to say that I think Wall Street could be headed into another major shock.

The Macroeconomic Conditions Are Scary But I am Not Panicked

This is coming from someone who was a bull through all the negativity last year as I insisted on new highs, and I was right at the time. But this scenario is different because the facts have drastically changed. The proof is in the record speed by which we fell from the highs.

The only potential saving grace here is the fact that finally, the lame duck U.S. government session is over. Neither side of the political aisle wants to stand in the way of bailing the citizens of this great nation. So the free money is raining from a massive $2 trillion relief package and I bet there is more to come.

Second, the treasury looks like it will also bail out the high profile industries, starting with airlines today. There is no way this administration will let any major company fail going into an election. That’s a talking point they cannot afford on a debate platform.

Thirdly, the Federal Reserve is fully committed to keeping the money flow loose. Chairman Powell reiterated this message public even on national television. So the bottom line, investors usually say “don’t fight the Fed” and I bet that they definitely won’t want to fight the Treasury and the White House on top of that.

All of this means that stocks could still rise in the face of economic carnage and maybe even set new highs. But caution is prudent and that’s why I would rather wait before committing new money to AMZN stock.

The FANG Effect on AMZN stock 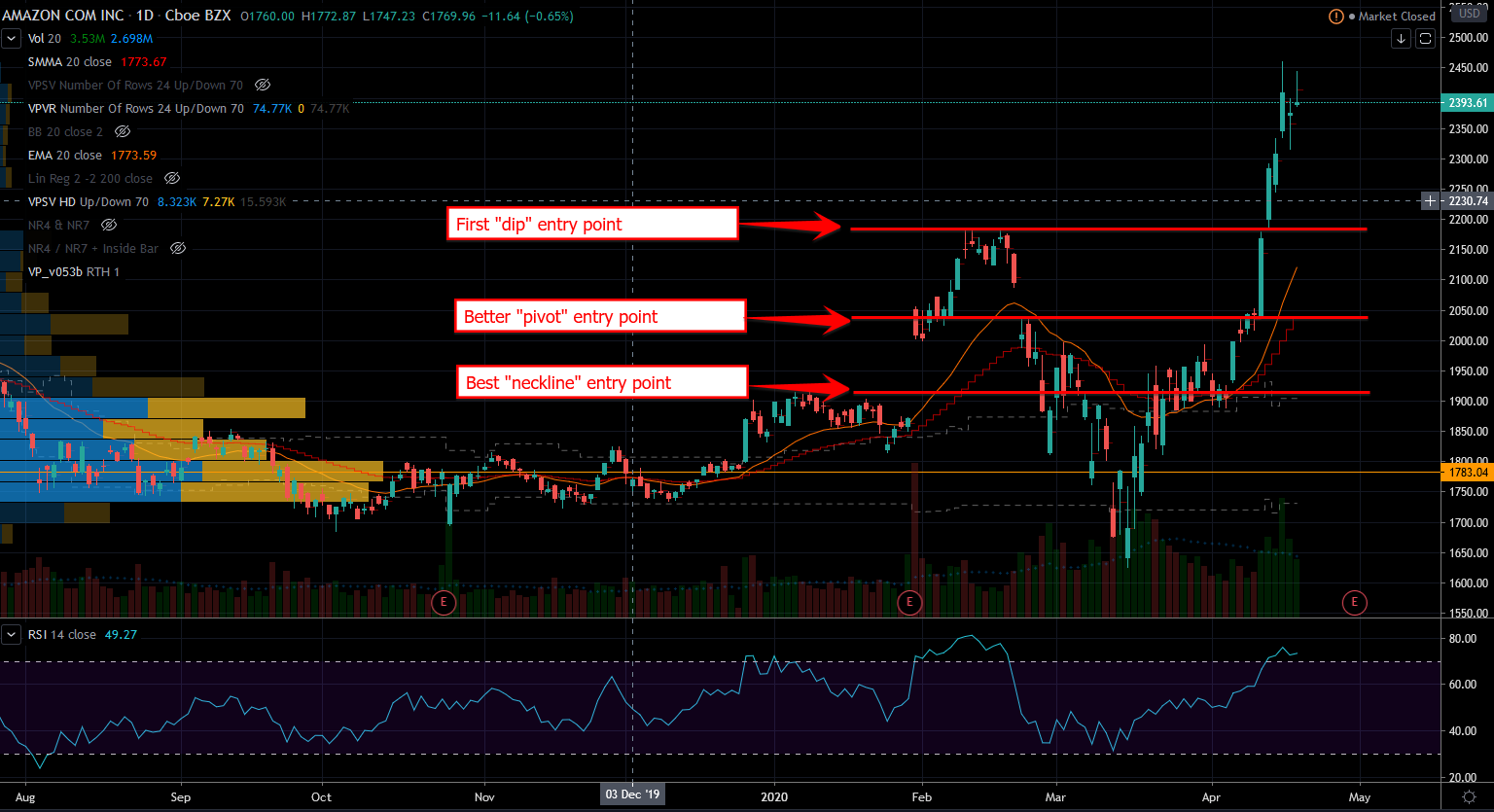 Today Netflix will report its earnings, and that’s likely to influence how AMZN stock trades this week. After all, they are both part of the now-famous FANG acronym, which also includes Facebook (NASDAQ:FB) and Alphabet (NASDAQ:GOOGL, NASDAQ:GOOG).

The reaction tomorrow in NFLX stock will be wild and a coin flip. It will likely drag Amazon along with it in whatever direction it goes. So if AMZN stock falls, and falls far, then it would make for a better entry point, particularly if it does so through no fault of its own. But at these altitudes, new entries are still precarious due to the general market threat.

Clearly, AMZN stock has reacted positively to the virus crisis so far. So any weakness it encounters here will be by definition extrinsic. So dips are definitely buying opportunities, and the deeper they are the better the setup.

Ideally, I want to go long near $2050 per share. I know it seems lightyears away from current levels but this was only 12 days ago. I would accept a partial entry at $2200 while I wait.