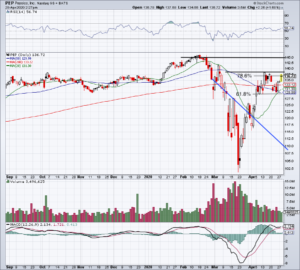 Stock indices continue to waver as we gear up for some big earnings reports over the next few days. Let’s look at a few top stock trades.

Harley-Davidson (NYSE:HOG) is making a powerful move on Tuesday, up about 16% at the time of this writing. After a rapid flush lower in March, shares have been consolidating in a tightening pattern.

Currently, that consolidation pattern is resolving higher. Bulls are now looking to see if HOG can clear the $22 mark. If it can, the 50-day moving average is the next step at $22.72 (not shown on the weekly chart above). Above that puts the gap between $24 and $26 in play.

Eventually, bulls will look to see if Harley-Davidson can get back to $30, a major support zone that broke down earlier this year. On the downside, a move below $20 would signal a loss of momentum for the bulls.

While it’s nice to see Southwest Airlines (NYSE:LUV) rallying after earnings, a 3.4% jump does little to erase the damage the charts have taken in 2020.

On the plus side though, it is reclaiming the $29.50 to $30 area. This was support in March and early April, but began failing later this month. Reclaiming this area now, it’s vital that it holds as support.

Otherwise, LUV’s 52-week lows — which were set on Tuesday — are in play. If shares continue higher, look to see how Southwest does with the declining 20-day moving average and downtrend resistance (blue line). Above puts $36 in play.

PepsiCo (NYSE:PEP) shares are tiptoeing higher after earnings, flirting with a move over the 78.6% retracement.

The recovery has been impressive thus far, with investors using a big pop in early April to reclaim the 61.8% retracement. PEP then chopped between $130 and $137.50 for several weeks, leading up to Tuesday’s earnings report.

The post-earnings reaction is bullish. However, we need to see the top of this range breakout, otherwise a move back down — even to just range support — is in play. For that to happen, we need PEP to close over this month’s high at $138.63. If it can, it puts a move up to $145 on the table.

On the downside, look for a move back below the 200-day moving average. If it happens, a retest of range support near $130 is possible. Below $130 is quite bearish in my view, putting Pepsi below all of its major moving averages, the 61.8% retracement and recent range support. $125 would be the next stop, in that case.

Shares gapped up before pulling back, but are so far holding the 78.6% retracement. Like PepsiCo, Pfizer’s rebound has been impressive in that it has recouped 75% of its coronavirus-induced losses thus far.

Bret Kenwell is the manager and author of Future Blue Chips and is on Twitter @BretKenwell. As of this writing, he did not hold a position in any of the aforementioned securities.