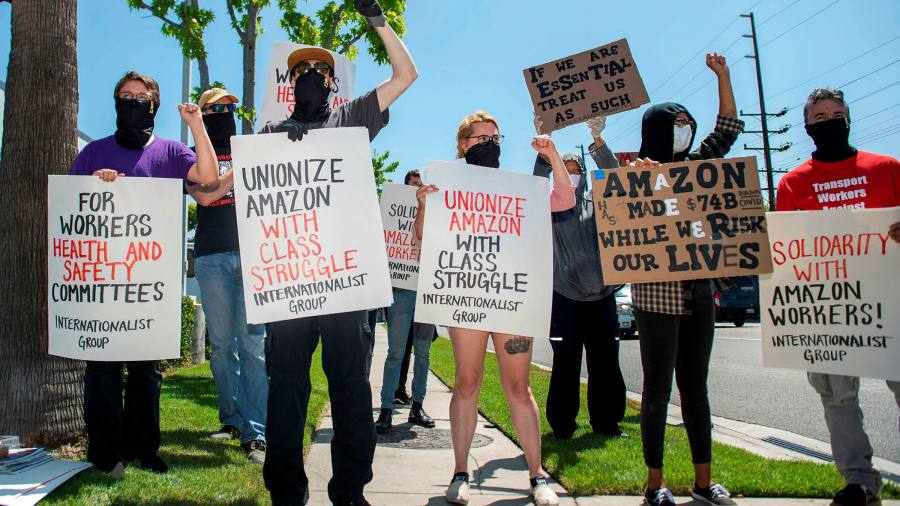 A senior Amazon software engineer has resigned in protest over the company’s dismissal of whistleblowers who brought attention to safety concerns among its warehouse workers.

Tim Bray, a vice-president at Amazon Web Services, the retailer’s cloud computing division, said on Monday he had stepped down from his role as vice-president and distinguished engineer after having “escalated [concerns] through the proper channels and by the book”.

“I quit in dismay at Amazon firing whistleblowers who were making noise about warehouse employees frightened of Covid-19,” he said in a blog post. Amazon did not immediately respond to a request for comment.

Mr Bray joined the company’s Vancouver office in 2014 and worked on its so-called serverless architecture, which allows companies to build and run applications on Amazon’s cloud servers. He was previously employed by Google, and contributed to developing the encryption service OpenKeychain used across the Google-backed mobile operating system Android.

His public resignation is the latest protest to rock Amazon, a world leader in ecommerce and cloud computing.

Unprecedented demand for online shopping during the pandemic has prompted the company to hire 175,000 new warehouse workers in just under two months, but Amazon has been accused of putting employees in danger by not slowing the pace of their work or providing them with adequate protective equipment.

Surging sales have also come at a high cost, with the company last week warning it expected to spend $4bn on Covid-related charges in the second quarter of the year, with excess sales largely wiped out.

But many still argue the company has not done enough. In Italy, workers have gone on strike at several distribution centres in the north of the country, protesting against unsafe working conditions and lack of information about infected colleagues.

Just over a week ago, the French government ordered Amazon to only ship “essential” items until it could ensure sufficient health and safety measures were introduced in warehouses.

In the US, where unions are weak, Amazon has fired several workers who were behind protests and walkouts organised to draw attention to concerns over staff safety.

Chris Smalls, who in March organised a walkout at an Amazon fulfilment centre in New York, was fired by Amazon for “violating social distancing guidelines and putting the safety of others at risk”.

The company has since also laid off white-collar office workers who have voiced concerns about their roughly 1m colleagues working in Amazon warehouses.

Mr Bray has contributed to the development of several well-used technology standards including the mark-up language XML. In his note, he said user experience designers Emily Cunningham and Maren Costa, who were members of an internal climate change activist group, were fired after organising a video call featuring warehouse workers from around the world, including “guest activist Naomi Klein”.

“The justifications [for their dismissal] were laughable; it was clear to any reasonable observer that they were turfed for whistleblowing,” Mr Bray said.

“Many people came to Amazon to make the world a better place, and now you see top leaders saying that the company does not share that mission,” she said.

In his resignation letter, Mr Bray contrasted the working conditions between warehouse workers who “are getting weaker with mass unemployment and [in the US] job-linked health insurance” and employees working at Amazon’s offices.

Amazon Web Services, he said, “was a different story [ . . .] its workers have power, the average pay is very high, and anyone who’s unhappy can walk across the street and get another job paying the same or better”.