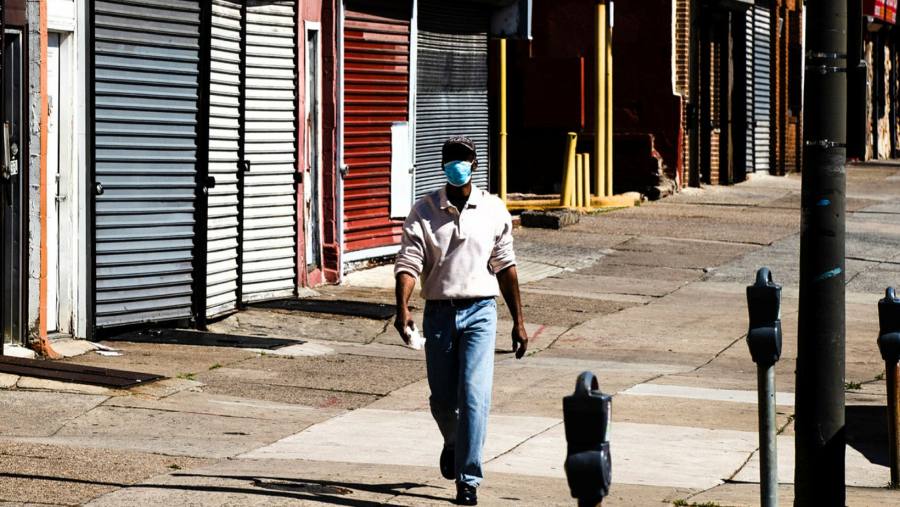 US unemployment has surged to 14.7 per cent, its highest level since the second world war, after 20.5m Americans lost their jobs last month following lockdowns that choked off the world’s largest economy.

The fall in non-farm payrolls in April — the largest drop on record — compared with economists’ expectations for a decline of 21.7m. That exceeded the 870,000 in losses in March, the US labour department said.

The unemployment rate — which had been hovering at 50-year lows before the pandemic hit — was better than the 16 per cent economists had expected but up from 4.4 per cent in March when non-essential businesses first began to close.

“The prospect of a V-shaped recovery is absolutely zero,” said James Knightley, chief international economist with ING. “Getting 40m jobs returning in the next 12 months? I simply cannot see it happening.”

The labour force participation rate, which measures people in work or looking for employment, decreased by 2.5 percentage points from March to 60.2 per cent, as social distancing measures affected people’s ability to look for work.

Counter-intuitively the report showed wages climbed as lower-paid workers such as restaurant employees were among those most affected by lay-offs. Average hourly earnings were up 7.9 per cent from a year ago, compared with expectations for a 3.3 per cent rise.

US equities were slightly higher after the figures came in slightly below expectations, with the S&P 500 opening up more than 1 per cent. The dollar index was unchanged.

“It is an astronomically high number,” said Randy Frederick, vice-president of trading and derivatives at Charles Schwab. “Even though we were all prepared for this, it is still shocking to see.”

Mr Frederick warned that next month’s jobs report could look even more dire, given that the report would cover a longer lockdown period. “The cut-off date for the data was April 18, so that means that this probably does not fully take into account the worst part of the lay-offs,” he said. The May unemployment rate could tick as high as 20 per cent, he said.

Notably, the latest report showed the number of those unemployed who reported being laid off on a temporary basis increased ten-fold to 18.1m.

Economists at Goldman have noted that over the past half century, the three recessions with the highest share of temporary firings were followed by the fastest labour market recoveries. However, concerns remain about how many of these cuts will become permanent. Friday’s report showed the number of permanent job losers increased by 544,000 to 2m.

Efforts to curb the spread of the pandemic, which has killed more than 70,000 Americans to date, began in March. States began to introduce social distancing measures and close non-essential businesses, which resulted in more than 33m Americans filing for first-time unemployment benefits and ended the longest running US economic expansion on record.

The Trump administration and Congress have sought to support businesses and Americans through the near $3tn stimulus package, which includes relief cheques for taxpayers and $660bn in loans earmarked for small businesses aimed at keeping employees on the payroll. Speaking on Fox News on Friday morning, Donald Trump shrugged off the data. “It’s totally expected. There’s no surprise,” he said. But economists said even more fiscal support was needed.

“In the 1930s a series of mistakes created utter misery and huge economic damage. Today the challenge is for the Fed and Congress to get ahead of this crisis as it unfolds. After a strong start, there’s a big risk that they fall behind and the economy’s abrupt hard stop turns into a prolonged slump that would be ruinous,” said James McCann, senior global economist at Aberdeen Standard Investments.

Job losses in battleground states like Michigan and Pennsylvania, that helped propel Donald Trump to victory in 2016, could have major implications for the president who had staked his re-election bid on a strong economy.