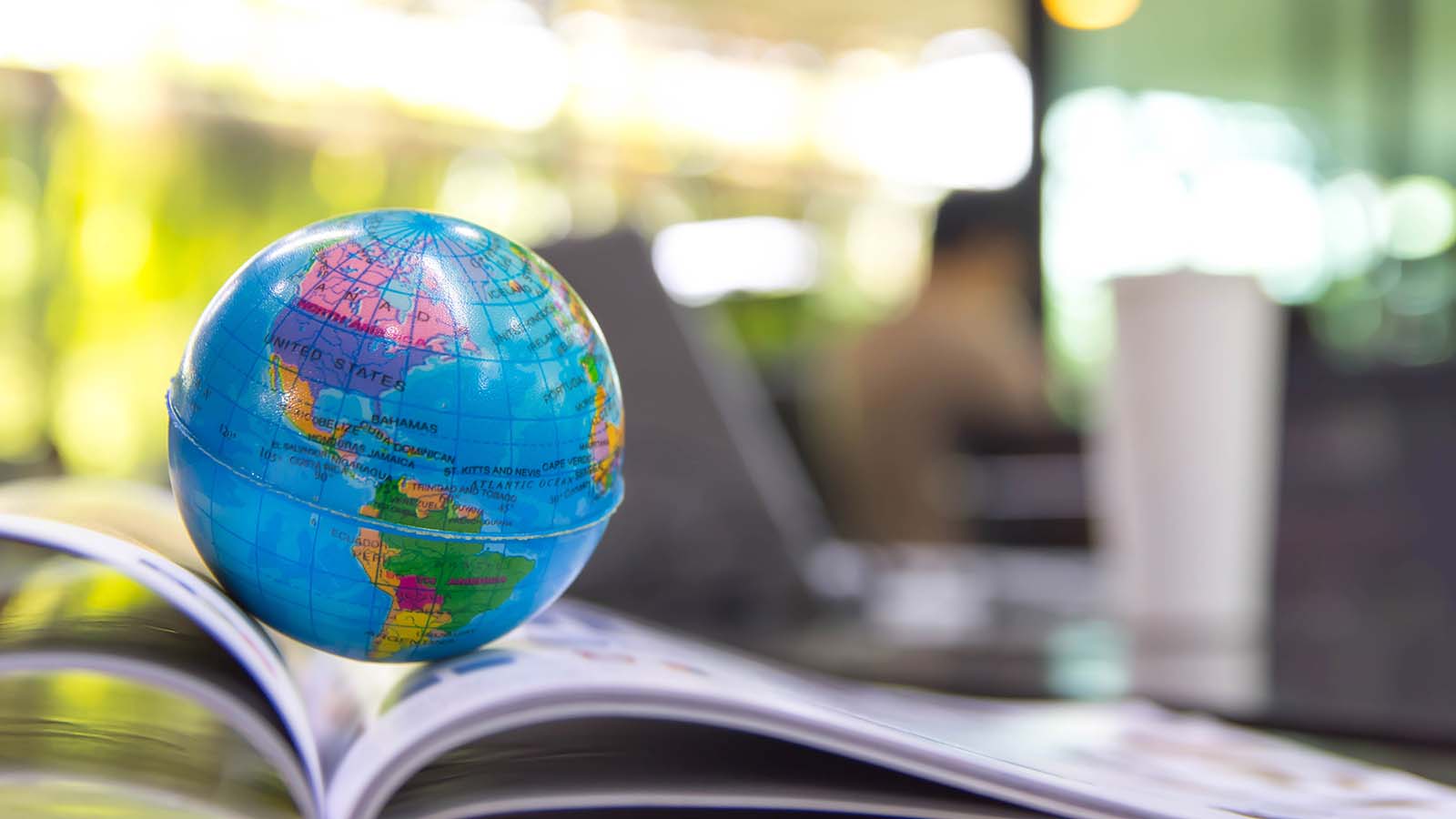 I wanted to find five foreign, profitable companies that investors would find worthwhile. They would have to be cheap stocks with low price-earnings ratios and high dividend yields. The idea is that by diversifying a portion of your portfolio in non-U.S. stocks, you will enhance your overall returns.

Often, foreign equities provide a return that is not correlated with U.S. stocks. At least, that is the theory. There are some significant drawbacks. I have managed non-U.S. equity portfolios on the institutional side for a good number of years and am well familiar with these issues.

For one, non-U.S. stocks are subject to currency fluctuations. When the dollar rises, the U.S. dollar return on non-U.S. equities tends to lag. However, I have learned that this effect tends to recycle over a number of years and sort of washes out.

A second issue is that often, non-U.S. stocks pay dividends just twice a year. This is because the vast majority of foreign companies only report their earnings semi-annually. However, the larger U.S. listed American Depository Receipts (ADR) or American Depository Shares (ADS) tend to report quarterly and pay their dividends that way. This occurs either because U.S. holders are a big percentage of the share base, or the company perceives that its stock price is “made” in the U.S.

Moreover, another issue is that many non-U.S. companies will pay their dividends out as a percentage of their semi-annual earnings. In other words, the dividends paid each year can fluctuate, based on profits. U.S. companies tend to pay out a steady dividend that increases over time. I have learned again that the larger non-U.S. stocks have started following the steady dividend approach.

The following five cheap stocks are worthwhile investments. They all have higher-than-normal dividend yields that tend to be paid quarterly. They also have low price-earnings ratios.

Let’s dive in and look at these foreign, cheap stocks more closely. 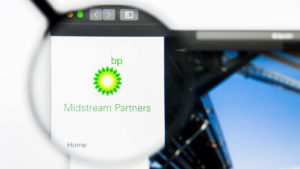 BP (NYSE:BP) is a profitable foreign stock with a nice 10.9% dividend yield. But I thought I would focus on one of its spinoff companies, BP Midstream Partners. BPMP has a higher dividend yield than BP.

BPMP is a U.S.-listed master limited partnership (MLP) that is focused solely on the midstream portion of the oil and gas life cycle. That involves running oil and gas onshore and offshore pipelines and terminals. 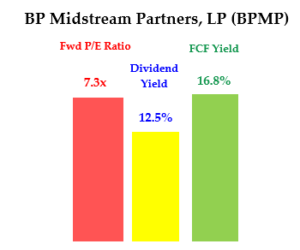 Now that more companies are looking to store oil and gas, its assets are close to fully occupied.

The company reported excellent results for Q1 on May 8. It says that the quarterly distribution is covered 1.17 times by its earnings. Moreover, BPMP says it is targeting a 5% increase in its distributions to shareholders in 2020 over 2019.

At 7.3 times earnings, with a 16.8% free cash flow yield and a 12.5% dividend yield, BPMP is very profitable and cheap. Investors should take a close look at the company.

Next on my list of cheap stocks is Publicis Groupe. This is a French advertising, communications and digital marketing company. Publicis has its tentacles in a lot of related areas like media, technology, healthcare communications and consulting services. It owns famed companies Saatchi & Saatchi and Leo Burnett.

Publicis Groupe trades on the over-the-counter market. Its dividend yield has been about 9%, and the forward price-earnings ratio is about 7. So it is a profitable company, but a cheap stock. 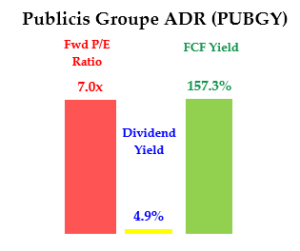 On April 13, Publicis reported its revenue, which was up 17%, although it included the effects of the acquisition of Epsilon. Its organic growth was down by 2.9% over last year. The company did not report its earnings, which apparently are done on a semi-annual basis.

There are four PUBGY ADRs per French ordinary share. As a result, PUBGY has a dividend yield of 4.9%. The company said it will pay the dividend in September.

So Publicis Groupe is a cheap and profitable foreign stock with an above-average dividend yield. 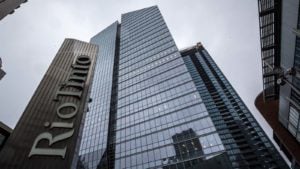 Rio Tinto is a $74 billion mining company based in London. It produces iron ore, bauxite, copper, gold, silver, aluminum and a host of other commodities.

Last year, Rio Tinto started paying dividends four times a year. It is still not clear that it will continue with this practice. I suspect it will, as there does not seem to be an announcement to the contrary. Based on last year’s dividend of $3.82 per share, RIO stock yields 8.4%. 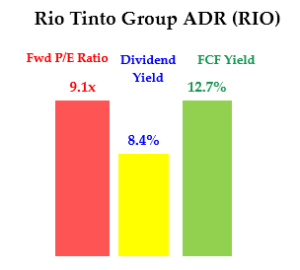 Moreover, the company has a website section showing consensus financial information, including production, revenue and earnings estimates by all its sell-side analysts. This is not allowed by U.S. regulators for U.S. stocks, for no good reason. But it is fairly common for foreign stocks under looser financial information regulations.

Based on this I estimate that earnings will be $5.04 per ADR this year. The company just needs global lockdowns to relax, or at least ease up.

This will increase the demand for global committees, especially iron and copper. As demand rises, the price of these commodities will increase and the company will make more money.

This puts the stock at a very cheap multiple of just 9 times earnings. So, combined with the 8.4% dividend, RIO stock offers very good value for investors. 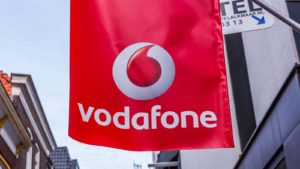 Vodafone is a telecom and cable TV company based in the United Kingdom. The company has a $43.8 billion market value and its ADR is listed on the Nasdaq Exchange.

VOD stock has a very high dividend yield at 6.6% and is quite attractive to investors at this level. It pays the dividend twice a year. Vodafone kept its final dividend level with last year in its earnings announcement on May 12. 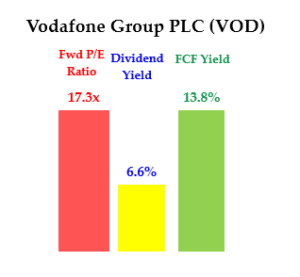 This requires a little explanation. First of all, Vodafone is like most other UK stocks that report their earnings and dividends twice a year. But for some reason, even though VOD’s earnings are in pounds, it pays out the dividend in eurocents.

So for this fiscal year ending March 31, the Vodafone annual dividend was kept stable at 9 eurocents per share. Now since there are 10 ordinary shares for every one VOD ADR, and since the exchange rate is $1.0823 per euro, the U.S. dividend per VOD ADR is about 97 cents. That makes the annualized yield about 6.6%.

To make things more complicated, the upcoming final dividend (half of the total dividend, since an interim dividend was already paid) is set at 4.5 eurocents per ordinary share. This will be paid on Aug. 7, 2020. This effectively makes the upcoming payment a dividend yield of about 3.3%. This depends on the exchange rate when the ADR payment is set.

Vodafone’s earnings for the year ending March were reasonably good. The bottom line is that the company expects its FY 2021 free cash flow to decline slightly from 5.7 billion pounds to 5.4 billion pounds. As a result, I expect the dividend will be kept level.

This makes VOD stock very attractive as a stable, well-covered and high-dividend play for income investors. 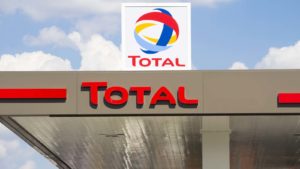 Total is a French oil and gas company. Last year the company paid four dividends to its shareholders, although it calls three of them “interim” dividends and the last one a “final” dividend. 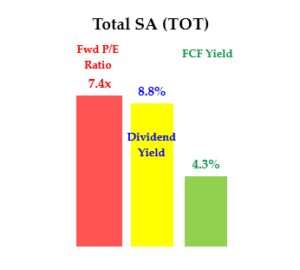 As a result, the stock has a very attractive dividend yield of 8.8% for investors.

I estimate that the stock is also cheap at just 7.4 times earnings. In its most recent Q1 earnings presentation, Total said its break-even level is at $25 per barrel of oil.

This is an attractively priced stock at below 8 times this year’s earnings, based on the company’s recent earnings results.