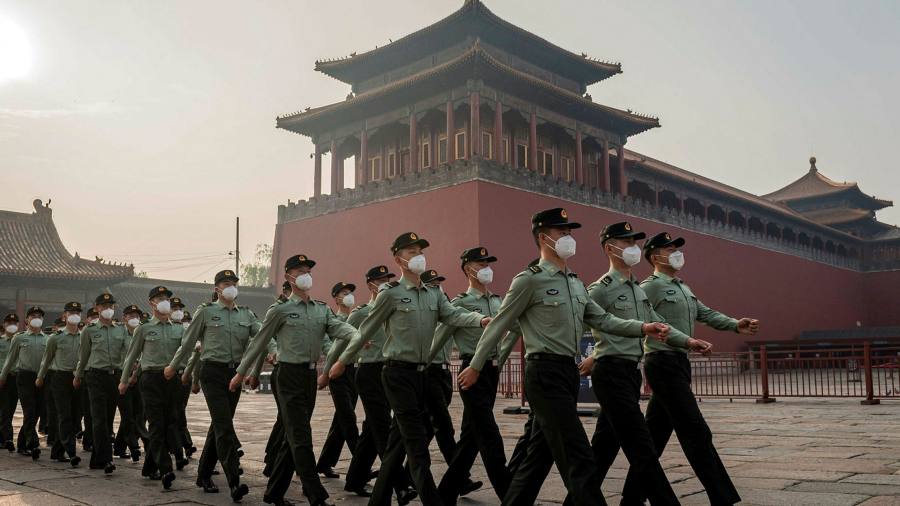 The Chinese government is preparing to impose national security legislation on Hong Kong, in a show of legal force that is likely to reignite the territory’s pro-democracy movement and exacerbate tensions between Beijing and Washington.

China’s parliament intends to draft the legislation and enter it directly into Hong Kong’s mini-constitution, or Basic Law, in a process that will bypass the territory’s Legislative Council, or Legco, according to two people briefed on the plans.

The official agenda of China’s National People’s Congress, released on Thursday night, included a proposal to “improve” national security protections in Hong Kong but did not give details of the planned changes.

At a press briefing, NPC spokesman Zhang Yesui said that “in light of the new circumstances” in Hong Kong, improvements in its national security framework were “highly necessary”.

Passing [national security legislation] in Legco is not an option now. Waiting any longer is also not an option

Tanya Chan, a pro-democracy lawmaker in Hong Kong, said: “It is the saddest day in Hong Kong history. It confirms one country, one system is so clear that it’s a huge setback.”

Pro-Beijing legislators command a majority in Legco. But Hong Kong’s chief executive, Carrie Lam, still failed to pass a controversial extradition bill in June last year that would have allowed Hong Kong residents to be tried in China for certain crimes in the face of a public uproar.

“Passing [national security legislation] in Legco is not an option now,” said one member of Hong Kong’s pro-Beijing establishment, who asked not to be named. “Waiting any longer is also not an option.”

Although Ms Lam later withdrew the extradition bill, pro-democracy protests rocked the territory for the rest of the year, subsiding only after the coronavirus epidemic brought a halt to public gatherings in February.

With the epidemic now receding in Hong Kong, protesters have been regularly gathering in smaller numbers to sing protest anthems in shopping malls across the territory. Ms Lam’s administration has also said it intends to introduce a new law later this month that will impose criminal penalties on people who mock the Chinese national anthem.

Chinese officials are also worried that Hong Kong’s pro-Beijing camp could lose its majority at the next round of Legco elections in September. Pro-democracy candidates swept lower-level district council elections in November, in what was interpreted as a referendum on Ms Lam’s handling of the crisis and Beijing’s increasingly heavy-handed approach to the territory.

The National People’s Congress convenes on Friday for its annual session, which was delayed for almost three months because of the coronavirus pandemic. Discussion at the NPC had been expected to focus on efforts to revive China’s economy, which recorded a historic first-quarter contraction of almost 7 per cent.

But the focus will now shift to Hong Kong, which is also an increasing source of friction between Beijing and Washington.

Chinese officials have accused “foreign forces”, allegedly led by the US, of fomenting unrest last year in Hong Kong. The US government responded by passing the Hong Kong Human Rights and Democracy Act, which requires the secretary of state to make a determination whether Hong Kong’s promised autonomy over all matters except for foreign affairs and defence is being eroded by Beijing.

If Mike Pompeo determines that Hong Kong’s “one country, two systems” arrangement is fraying, US President Donald Trump can revoke certain economic and trade privileges Hong Kong enjoys with the US that are not extended to China as a whole.

According to Article 23 of the Basic Law, Hong Kong’s government and legislature were required to enact and pass national security legislation to replace colonial laws that expired when the former UK colony reverted to Chinese sovereignty in 1997.

Hong Kong’s first chief executive, Tung Chee-hwa, attempted to pass national security legislation in 2003 but withdrew it after it triggered a mass protest. Mr Tung’s administration never recovered from the failure and he resigned two years later halfway through his second term.

His three successors never attempted to reintroduce national security laws, despite ever more strident warnings from Chinese officials that Hong Kong was duty-bound to do so under the Basic Law.

Earlier this week Ms Lam told Chinese state media she was disappointed that Hong Kong had failed to enact Article 23 legislation on its own.