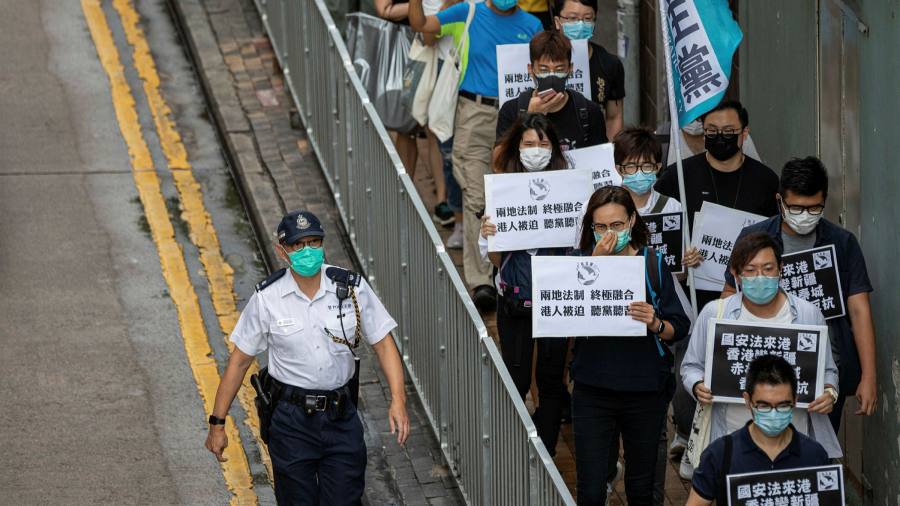 Mike Pompeo, US secretary of state, slammed China’s decision to impose a new national security law on Hong Kong, saying the move would be a “death knell” for autonomy in the Asian financial hub and former British colony.

The controversial plan, which would bypass Hong Kong’s own legislature, marks the latest effort by China to clamp down on political expression in Hong Kong, which was guaranteed a high degree of autonomy under the “One Country, Two Systems” model agreed by London and Beijing when Britain returned the territory to China in 1997.

“The decision to bypass Hong Kong’s well-established legislative processes and ignore the will of the people of Hong Kong would be a death knell for the high degree of autonomy Beijing promised for Hong Kong under the Sino-British Joint Declaration,” Mr Pompeo said in a statement urging the Chinese government to reverse course.

“Any decision impinging on Hong Kong’s autonomy and freedoms as guaranteed under the Sino-British Joint Declaration and the Basic Law would inevitably impact our assessment of One Country, Two Systems and the status of the territory,” Mr Pompeo added.

The US extends special economic and trading relations to Hong Kong but not mainland China as a whole. If Washington deems that the “one country, two systems” arrangement is fraying, the US president can revoke certain privileges.

Donald Trump has yet to comment on the Chinese decision, beyond saying that he would make a statement at some point. In the past, the US president has issued only lukewarm support for pro-democracy protesters in Hong Kong, which analysts attributed to his reluctance to jeopardise talks with Beijing aimed at easing the Sino-US trade war.

But in recent months, Mr Trump has taken a much more aggressive stance towards China, blaming Beijing for the global spread of coronavirus, which originated in Wuhan. Experts expect anti-China sentiment to grow as Mr Trump campaigns for re-election in November.

China has provided only limited detail about the new security law, which could fundamentally change life in Hong Kong. At an NPC briefing, a spokesperson said a new national security framework was essential “in light of the new circumstances” in Hong Kong.