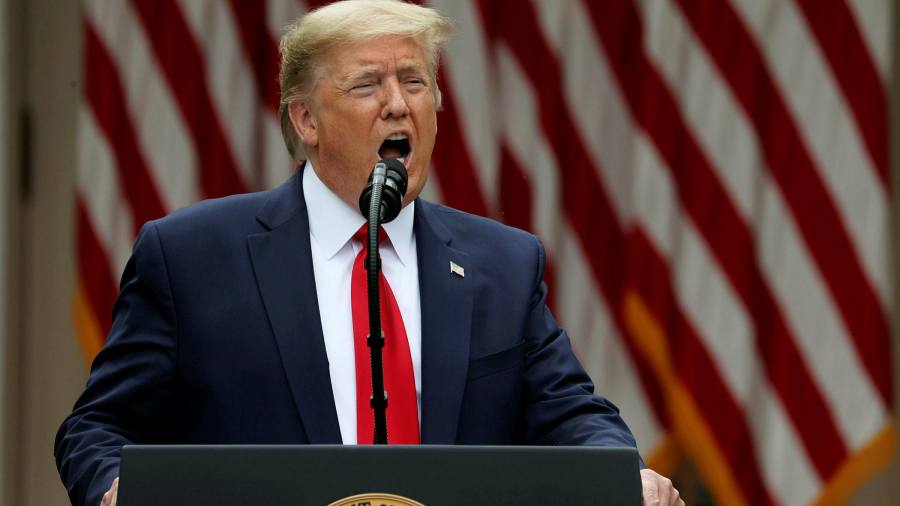 Donald Trump said the US will revoke special trade privileges for Hong Kong and sanction officials from the territory and mainland China after Beijing moved to impose new security laws on the former British colony.

The move came as part of a range of measures from Mr Trump targeting China, including banning some Chinese nationals entering the US — a move he said would enhance national security and protect American scientific research. He added he would also order his team to examine the practices of Chinese companies listed on US exchanges “with the goal of protecting American investors [and] investment firms”.

“This week China unilaterally imposed control over Hong Kong security. This was a plain violation of Beijing’s treaty obligations with the United Kingdom,” Mr Trump said about the 1984 Sino-UK joint declaration that paved the way for Britain to hand back its former colony to China in 1997.

Additionally, the US will withdraw from the World Health Organization, the president said. Mr Trump has over the past few months blamed China and the global health body for the global spread of the coronavirus pandemic.

The US will instead redirect funding “to other worldwide and deserving urgent global public health needs”, he said.

The move will stoke further tension in the US-China relationship, which has become increasingly strained in recent months as Mr Trump has blamed the Chinese government for the global spread of the coronavirus pandemic.

Earlier this week Mike Pompeo, secretary of state, said the US no longer viewed Hong Kong as being autonomous from China, in a declaration that paved the way to revoking special trade privileges. Removing the special economic status could result in Hong Kong being subject to tariffs that currently apply to mainland China.

The state department is required to certify annually if Hong Kong remains autonomous following a US law passed last year in response to Chinese efforts to clamp down on political expression and demonstrations in the territory.

The US declaration came after Beijing signalled that it would impose its national security laws on Hong Kong, in its latest effort to further chip away at the autonomy that the former British colony was guaranteed for 50 years under the “one country, two systems” model underpinning the return of the territory to China in 1997.

“While the US once hoped that free and prosperous Hong Kong would provide a model for authoritarian China, it is now clear that China is modelling Hong Kong after itself,” Mr Pompeo said on Wednesday.

The Trump administration has become more assertive towards Beijing, over everything from cyber espionage to efforts to pressure the main US federal retirement fund not to invest in China. Meanwhile, Democrats and Republicans in Congress are broadly in agreement over the need to strike a more hawkish posture towards Beijing.

Mr Trump has previously taken a softer stance towards Hong Kong. The Financial Times reported last year that he told the Chinese leader Xi Jinping at the G20 summit in Osaka that he would not take an assertive approach on Hong Kong, in a move that was widely seen as the US president trying to prevent tensions from derailing trade negotiations.

Earlier on Friday, the White House said Mr Trump had spoken to British prime minister Boris Johnson and that the two leaders had “reaffirmed the importance” of the 1984 Sino-British joint declaration.

It said Mr Trump and Mr Johnson had “agreed to co-operate closely in responding to any action by China that undermines the declaration or goes against the will of the people of Hong Kong”.