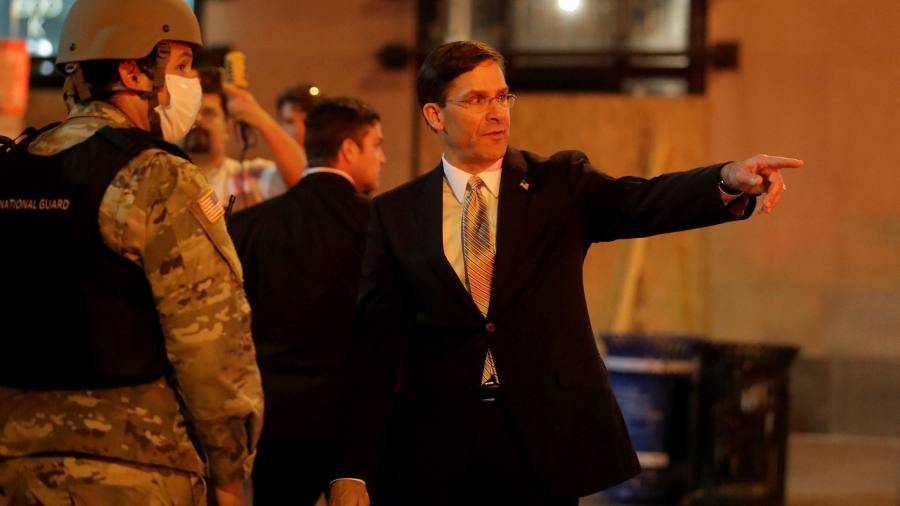 The US defence secretary said he was opposed to invoking a law that allows the president to send soldiers into American streets, just days after Donald Trump threatened to use the military to clamp down on protests over the death of George Floyd.

“I do not support invoking the Insurrection Act,” Mark Esper said on Wednesday about the 1807 law, which allows a president to overrule governors and deploy active-duty soldiers across the country.

Speaking at a press conference after coming under heavy criticism over the past few days, Mr Esper said the National Guard was “best suited” to support local law enforcement, and that using active-duty soldiers should be a “last resort and only in the most . . . dire of situations.”

The defence secretary’s comment that he does not support invoking the 1807 law — which would not apply to Washington, since it is not a state — put him in direct conflict with the president. Mr Trump has since Monday repeatedly told governors to call up more National Guard in response to widespread protests.

The Insurrection Act was last invoked in 1992 after four police officers were acquitted of charges in connection with the brutal beating of Rodney King, a black man, in Los Angeles.

Mr Esper and General Mark Milley, chairman of the joint chiefs, have come under intense fire since Monday after they accompanied Mr Trump to a church near the White House to pose for a photo. The widely panned move came minutes after Mr Trump told governors he would deploy the military if they did not clamp down on the protests.

The defence officials were also heavily criticised because federal police had used chemicals on people protesting peacefully before the 7pm curfew in the capital to clear the path for the president to walk across Lafayette Square, the park in front of the presidential mansion, to St John’s Church, where he posed for photos with a Bible.

Mr Esper previously said he thought they were going to inspect a damaged toilet at the church — an explanation that was ridiculed by critics, given the precise organisation surrounding the movement of military officials.

The defence secretary on Wednesday defended himself against accusations that he had been slow to act, saying he wanted to give his “leaders the space to also craft some more messages expressing our outrage”.

Protesters across the country continued largely peaceful demonstrations on Tuesday night, even as they defied curfews in cities from Washington and New York to Atlanta, Houston and Los Angeles.