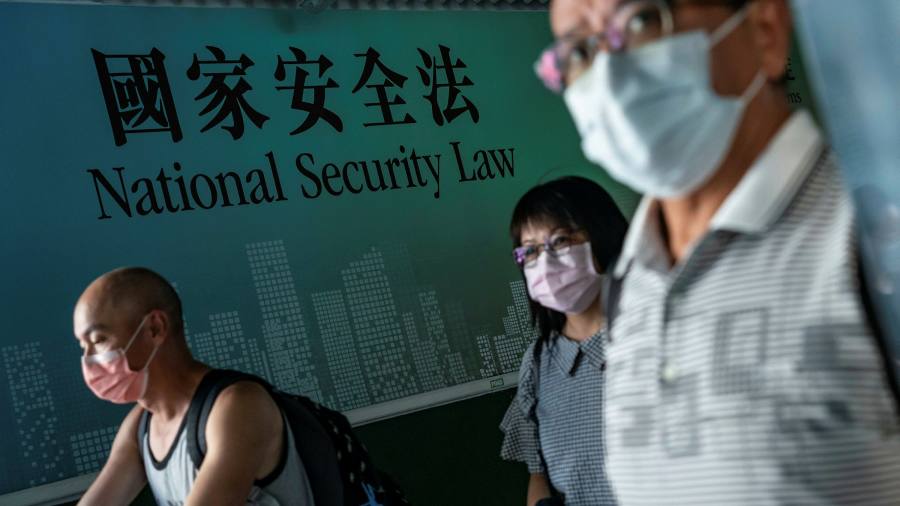 China has passed a sweeping national security law for Hong Kong, increasing its power over the territory in a move that drew swift condemnation from the US, Europe and Australia.

The legislation was introduced after the territory was rocked by anti-government protests Beijing said were inspired by foreign forces. It was enacted without discussion by Hong Kong’s own legislature, in an unprecedented show of China’s control over the city’s legal system.

The new law will increase Beijing’s grip on the territory, which is meant to have a high level of autonomy under the conditions of its handover from British rule back to China in 1997. Crimes such as terrorism, subversion, secession and collusion with foreign elements will attract penalties of up to life imprisonment.

The Trump administration said the new law was a “violation” of China’s commitments under the Sino-British Joint Declaration.

“As Beijing now treats Hong Kong as ‘One Country, One System,’ so must the United States,” said John Ullyot, the National Security Council spokesperson. “The United States will continue to take strong actions against those who smothered Hong Kong’s freedom and autonomy. We urge Beijing to reverse course immediately.”

Under the new law, Chinese state security agencies will also be allowed to operate openly in Hong Kong for the first time. The legislation applies to people in Hong Kong and to those not in the territory, meaning that foreign nationals who speak in favour of independence for the region, or advocate sanctions on China, could be prosecuted upon entering Hong Kong or mainland China.

Damaging public transport with intent to cause “serious social harm” is considered a terrorist act under the new law, which also gives Beijing the power to adjudicate national security crimes when requested by Hong Kong’s new state security bureau.

On Tuesday, Marise Payne, Australia’s foreign minister, said: “Australia is troubled by the law’s implications for Hong Kong’s judicial independence, and on the rights and freedoms enjoyed by the people of Hong Kong, both of which underpin the city’s success.”

She added that “the eyes of the world will remain on Hong Kong”.

Dominic Raab, the UK foreign secretary, said the new law was a “grave step, which is deeply troubling”.

Brussels also criticised the passage of the law. “We deplore the decision,” said Charles Michel, president of the European Council of leaders of EU member states. “This law risks seriously undermining the high degree of autonomy of Hong Kong and having a detrimental effect on the independence of the judiciary and the rule of law.”

Eric Cheung, a legal expert at the University of Hong Kong, said the law was “much worse” than he had expected.

“The extraterritorial effect of this piece of legislation I think will really alarm all the foreigners and foreign investment and no one could now feel safe.” Travellers transiting through Hong Kong risked being arrested, he said.

Ahead of the Chinese move, the UK said it would prepare a “pathway to citizenship” for as many as 3m Hong Kongers who were eligible to apply for British National (Overseas) passports.

The US said it would bar companies from exporting weapons and sensitive technologies to Hong Kong because of concerns that they could be obtained by the Chinese military. The administration is also considering moves that would further unravel the special trade privileges that Hong Kong has enjoyed since handover.

Ursula von der Leyen, European Commission president, warned last week of “very negative consequences” if China pushed ahead with the law. She added that the EU had been discussing the matter with its partners in the G7 group of western powers and Japan. But the European bloc has yet to specify what measures, if any, it might take in response.

Hong Kong’s police force can intercept communications and carry out covert surveillance on suspects, with the approval of the region’s chief executive.

The chief executive also has the power to select judges to preside over national security cases, in contrast to the current system, in which judicial assignments are made by the judiciary.

It Still Is Way Too Early to Consider Setting Sail With Carnival Stock
Kodak shares tank as much as 42% as government loan is put on pause while allegations investigated
Forget Wayfair, Buy DocuSign Instead
UAE deal with Israel a ‘stab in the back’, say Palestinian leaders
5 Top Stock Trades for Wednesday: GLD, TWTR, BA, V, NIO