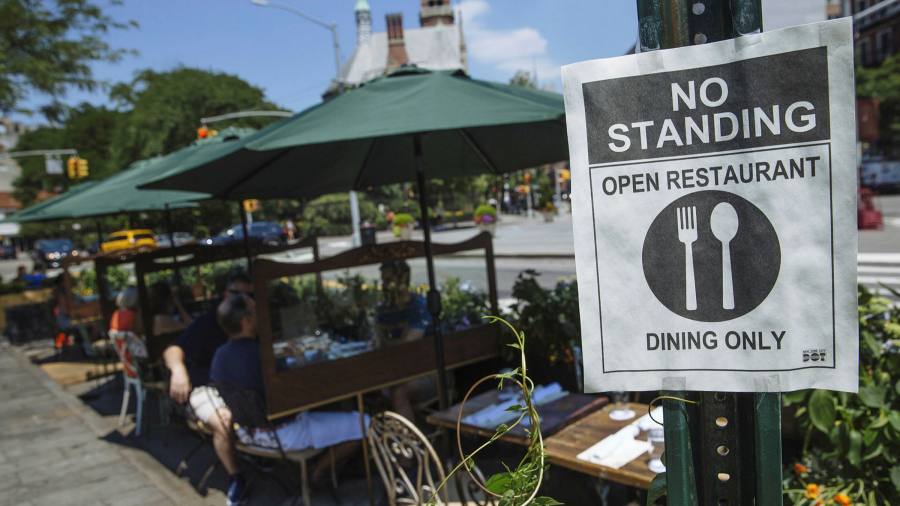 A senior Federal Reserve official has warned that the rebound in the world’s largest economy is in danger of stalling as a result of the recent spike in coronavirus infections across several large US southern and western states.

In an interview with the Financial Times, Raphael Bostic, the president of the Federal Reserve Bank of Atlanta, whose district covers some of the regions hardest hit by the current outbreaks, including Florida, said high-frequency data had shown a “levelling off” of economic activity both in terms of business openings and mobility.

“There are a couple of things that we are seeing and some of them are troubling and might suggest that the trajectory of this recovery is going to be a bit bumpier than it might otherwise,” Mr Bostic said. “And so we’re watching this very closely, trying to understand exactly what’s happening.”

US jobs data released for the last two months have shown that American employers have added back 7.5m of the 22.2m positions lost since the outset of the coronavirus crisis, sparking hopes of a faster rebound in the labour market.

But the June figures were collected before a surge of infections in several large US states, including Florida, Texas, Arizona and California, which have caused local officials to reimpose some restrictions introduced during the initial lockdowns.

The longer this goes without them getting relief, the more likely that they’re not going to be able to survive

Jefferies, the investment bank, said on Monday that its index of US economic activity had “clearly flatlined” after two months of improvement. “The loss of momentum is broad-based, spanning small business activity, discretionary footfall, restaurant bookings, traffic congestion and web traffic to state unemployment portals,” it said, referring to data sources that update with greater frequency than official statistics.

Mr Bostic said the Atlanta Fed was “trying to figure out whether this levelling off is something that is a more sustained pattern, or just a pause”. His “biggest concern in this whole period”, he said, “is to what extent are business losses permanent, are job losses permanent”?

His comments were accompanied by a call for Congress to offer more fiscal support for the US economy, since a big chunk of the $3tn in aid to businesses and households approved earlier in the year to fight the coronavirus shock is now fading or expiring.

Unemployment benefits are set to run out for millions of Americans at the end of the month — but Democratic and Republican lawmakers are still heavily divided on the scale and details of any further stimulus and are on recess until the week of July 20.

“When the relief was passed initially, there was a thought about how long this was going to last, and as more information has come in, there’s reason to suggest this is going to last longer than that,” said Mr Bostic, “which means it’s only natural, given that possibility, to start thinking about what the next relief package should look like.”

He added that small businesses were most at risk. “The longer this goes without them getting relief, the more likely that they’re not going to be able to survive. And so all the jobs associated with that will move from the temporary column into permanent column and that will be extremely painful,” Mr Bostic said.

The US has reported daily record numbers of new coronavirus cases on several occasions over the past week. On Monday authorities in south Florida ordered restaurants and gyms to close in the Miami region, one of the emerging coronavirus hotspots.

Mr Bostic, 54, a former Fed economist and Obama administration housing official, is the first black person to serve as president of a regional Fed. Last month he reacted to the Black Lives Matter protest by issuing a strident call to fight “systemic racism” and its pernicious effects on the American economy.

While many Fed officials have noted that the central bank’s willingness to keep monetary policy very loose for a long period of time was a key means to narrow economic disparities, Mr Bostic said monetary policy was limited in its ability to make an impact.

“For me I think it’s really important that we diagnose the problem and recognise that there are some barriers,” he told the FT. “We need to make sure that we’re applying policy prescriptions that speak to those barriers and monetary policy, I think, can help to some regard on the trajectories, but [for] more fundamental equality of access I think it’s going to take more than just that.”

As the Fed debates its own next steps, including whether to firm up its forward guidance on interest rates to clarify what it would take for it to start tightening policy again, Mr Bostic was cautious about the need for such action.

“I think a lot of it depends on where we are. I do think that talking about the benchmarks that we’re looking at is an important thing,” he said.

“But I do worry that circumstances are going to be very different in the future than they are now and so I want to be careful about being too presumptuous about where we’re going to be. All this uncertainty is definitely in my mind”.