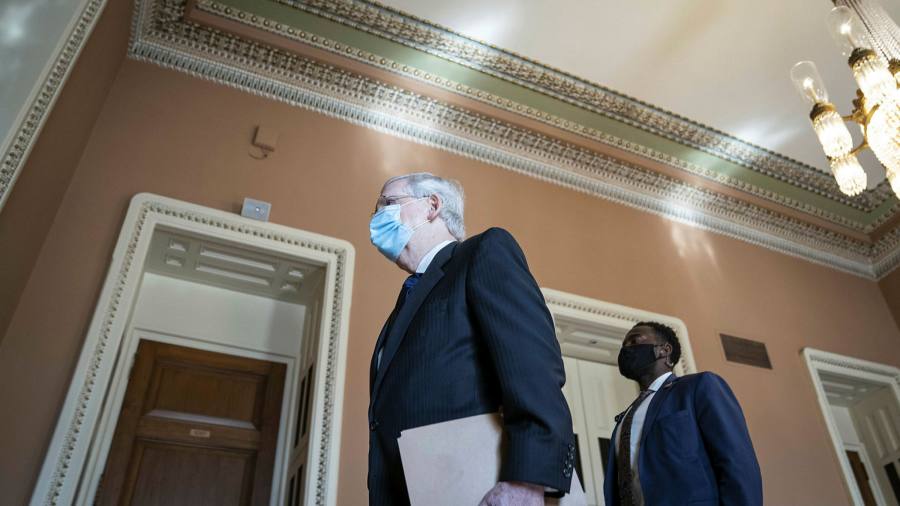 Senate Republicans set the stage on Monday for a clash with congressional Democrats by unveiling a White House-backed plan for $1tn in new stimulus that would cut emergency unemployment benefits by two-thirds.

The move on the coronavirus relief package came after weeks of hesitation by party conservatives wary of more government spending. It reflects rising concern among Donald Trump’s allies about the deterioration in US economic prospects fewer than 100 days before the November election.

“We have one foot in the pandemic and one foot in the recovery. The American people need more help,” Mitch McConnell, the Republican Senate majority leader, said as he introduced the plan, which was structured as a series of bills.

Democrats in the House of Representatives, who approved $3tn in additional government aid for the economy two months ago, said the Republican proposal fell short of what is needed as the recovery faces new setbacks due to surging Covid-19 cases in many states.


Funds set aside for coronavirus testing under the stimulus plan

Republicans have argued that the Democratic bill discourages work by maintaining emergency jobless benefits at $600 a week. Under the Senate plan, enhanced unemployment insurance would be continued — but at just $200 a week in September. From October, workers would receive 70 per cent of previous wages.

Ron Wyden, the top Democrat on the Senate finance committee, said: “The Republican proposal is a punch in the gut and a slap in the face for the 30m Americans relying on lifeline unemployment insurance benefits. It adds insult to infection.”

In addition to the jobless benefit extension, Americans would get a new round of direct payments from the US Treasury, worth $1,200 for most adults, in addition to the amount they received in April.

Congress would also set aside additional funding for loans directed towards the hardest hit small businesses. The legislation does not, however, provide for significant aid to cash-strapped state and local governments, compared with the $900bn proposed by Democrats.

Nancy Pelosi, the Democratic speaker of the House, called on Republican leaders to immediately begin negotiations on a compromise. Most policy analysts and congressional aides are not expecting a deal to take shape before early August, in a best-case scenario.

“Time is running out. Congress cannot go home without an agreement,” she said. Chuck Schumer, the Democratic leader in the Senate, added on Twitter: “The American people have been waiting 10 weeks for the Republicans to get their act together!”

The fate of the US stimulus is being closely watched by economists, including at the Federal Reserve, who are worried that failure to reach a deal, or an agreement on a deal with limited support, could stunt a recovery already being hit by rising Covid-19 cases in many states.

The Republican plan also includes $16bn for coronavirus testing, and $105bn in federal funding for schools that reopen amid the pandemic, which has been strongly encouraged by the Trump administration.

“We know the House has got some high numbers, we’ve got some good numbers,” Richard Shelby, the veteran Republican senator from Alabama, said about the plan.

The 4 Best Utility Stocks Right Now
Electrameccanica Vehicles Is a Silly, Pointless Gimmick
As Plug Power Stock Surges, Take Profits Before It Falls to Earth
Nikola’s entire quarterly revenue of $36,000 was from solar installation for the executive chairman
Could Carnival Stock Retest Lows as Sailings Get Delayed?