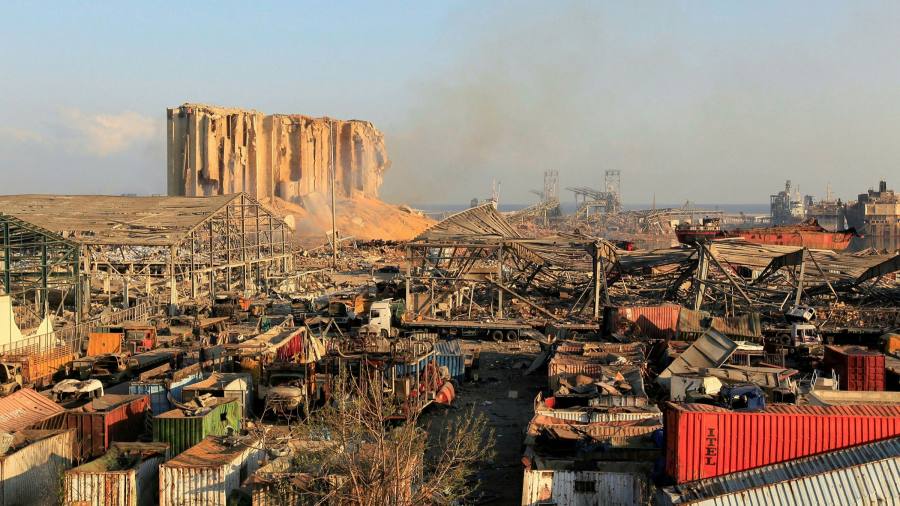 The death toll from the explosion that ripped through Beirut climbed to at least 100 on Wednesday, while some 4,000 people were reported to have been wounded in the massive blast at the city’s port.

Two fires were still burning at the scene of the explosion on Wednesday, which the authorities said took place at a warehouse where 2,700 tonnes of ammonium nitrate had been impounded.

Helicopters are circling overhead and the army has been deployed.

An Africa-bound ship carrying 2,750 tonnes of ammonium nitrate was impounded at the Beirut port in late 2013, according to legal reports at the time. The law firm prosecuting the case said the cargo had been unloaded into a warehouse.

Hassan Diab, Lebanon’s prime minister, who described the blast as a “catastrophe”, said details about the warehouse would be made public in due course.

“I will not pre-empt the investigations. At the moment, we are focusing on handling the disaster, pulling the martyrs out, and treating the wounded,” he said, according to Lebanon’s National News Agency. “But, I promise that this catastrophe will not go unpunished and those responsible will be held accountable.”

The Lebanese Red Cross’s top official said 100 people had died, while health minister Hamad Hassan put the death toll at 80, both in comments to local channel LBC on Wednesday. The number is expected to rise.

The incident is a painful blow to a country already reeling from its worst economic crisis in decades, and a rising level of coronavirus infections which were already pressuring health services.

The blast devastated Beirut’s port, a crucial artery for import-dependent Lebanon, a country already enduring soaring food prices and rising poverty because of an economic crisis. Economists said data showed about three quarters of Lebanon’s imports enter via the port.

The hangars which make up Beirut’s free zone were ripped apart in the blast, and a national grain silo was cracked open, spilling out its wheat.

Lebanon is one of the world’s most heavily indebted countries and in March it defaulted on $90bn of debt. The Lebananese pound has collapsed and inflation has risen to about 56 per cent, while the IMF forecasts that the economy will contract by 12 per cent this year.

In an economic recovery plan finalised in April, the government banked on receiving $10bn in international support, but fighting between rival political factions, who have long been blamed for failing to push through much-needed reforms, have stymied talks with the IMF.

“It’s a severe blow and it compounds what was already a very bad economic situation, the humanitarian consequences will be very alarming,” said Jason Tuvey, emerging markets economist at Capital Economics, which predicts the economy will shrink by 30 per cent this year. “One glimmer of hope is that countries around the world may be more willing to give financial aid. But my feeling is that it will be tied to humanitarian and reconstruction efforts rather than the large financing that Lebanon needs to sort out its balance of payments and public debt problems.”

Lebanon’s Higher Defence Council has declared Beirut a “disaster zone” and recommended that the cabinet impose a two-week state of emergency.

Social media pages have been set up in an attempt to locate the missing. A hospital in East Beirut was on Wednesday crowded with masked people waiting for information. Many of the institutions’ windows were blown out.

Hospitals in Beirut have been overwhelmed by casualties, with medics forced to treat patients in veterinary clinics and car parks, patients and first responders said. Some of those hurt were sent to hospitals in cities as far away as Tripoli, 80km north of the capital.

Mr Diab has declared Wednesday a day of mourning and has asked for international help. Countries from Qatar to the US and France have pledged to send assistance.

Shops in central Beirut and across the city sustained huge damage.