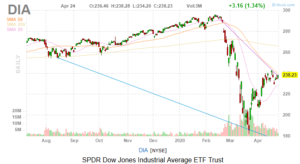 It was a strong end to the week, though the S&P 500 was still on track for a weekly loss, as oil rallied again and tech stocks drove the major equity averages higher on Friday.

Another $484 billion stimulus package was approved earlier today, though that was a widely known event. Still, the cash for businesses is much needed, as highlighted by another round of grim economic data. Earlier today, it was revealed that orders for durable goods plunged 14.1% in March, the second-worst decline on record for that metric.

Broadly speaking, Friday was somewhat uneventful, a scenario investors weary of market whiplash will take. It was another one of those days where the novel coronavirus and earnings dominated the headlines. A mostly docile day got the Dow to 19 winners against 11 losers in late trading.

Between Thursday afternoon and Friday morning, three Dow components reported earnings. Intel (NASDAQ:INTC) was arguably the marquee member of that trio, with the semiconductor giant saying it earned $1.45 a share on revenue of $19.8 billion in the first quarter, easily beating consensus estimates of earnings per share (EPS) of $1.28 and revenue of $18.7 billion.

The problem wasn’t the quarter. Rather, it was Intel issuing downbeat second-quarter guidance of EPS of $1.10 on revenue of $18.5 billion. Analysts were expecting earnings of $1.19 on revenue of $17.97 billion. This is proof positive that Covid-19 is going to pressure second- and probably third-quarter results for a slew of companies.

On that note, American Express (NYSE:AXP) traded slightly higher. The company’s first-quarter results were decent due to strength in January and early February, but as was widely expected, as the coronavirus took hold of the global travel and leisure industry, American Express was crimped in the back half of February and all of last month.

Again, that’s a theme investors will have to deal with this coming quarter, likely into the third. Adding to the talk of a weakening economy, AXP boosted its reserves for bad loans by $1.7 billion to $2.6 billion, and that’s saying something given the company’s generally affluent clientele.

Verizon (NYSE:VZ) was the other Dow member delivering first-quarter results before the bell today,  and there wasn’t much in the way of positive or negative surprises here, explaining why the stock closed lower in modest fashion today.

Another negative effect of the coronavirus on markets is that an array of S&P 500 companies are cutting or suspending dividends this year. Dow component Raytheon Technologies (NYSE:RTX) could join that group next week, according to Bloomberg data.

Fortunately, it’s not all bad news on the dividend front as the same data set indicates dividend hikes could be coming from Apple (NASDAQ:AAPL) and International Business Machines (NYSE:IBM) as soon as next week.

Boeing (NYSE:BA), the dominant name in bad news accumulation, was at it again Friday as the stock was the worst-performing name in the Dow.

Today, it was not one, but two news items weighing on the downtrodden aerospace names. In no particular order, the company is expected to slash production of its 787 Dreamliner and announce massive layoffs when it delivers first-quarter earnings next week.

Adding to Boeing’s woes is increasing speculation that the company could have difficulty finalizing its acquisition of Brazil’s Embraer.

One green shoot to report today: a recent survey by the University of Michigan, the school behind the all-important consumer sentiment report, indicates that a majority of American consumers believe the coronavirus isn’t a permanent situation (it’s not) and while the survey indicates gloominess about the near-term state of affairs, it also shows consumers see a rebound coming when the virus abates.