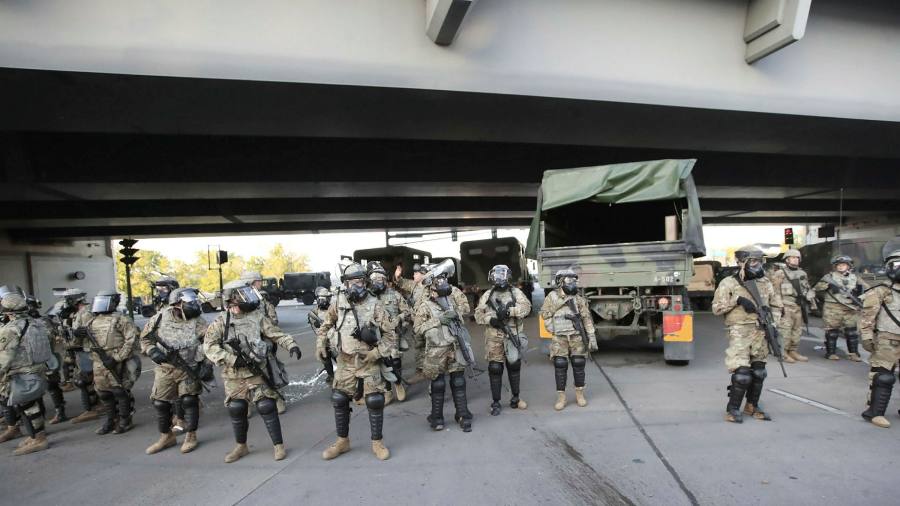 The governor of Minnesota has sent in the National Guard in the biggest domestic deployment in the state military reserve’s history in an attempt to contain protests and riots following the death of George Floyd in Minneapolis.

Tim Walz, the state’s governor, said that more than 1,000 reserves were being deployed, in addition to the 700 that were on duty as of Friday night, when protests spread from Minneapolis to many other major US cities, including Atlanta, New York and Washington.

The Associated Press reported on Saturday that the Pentagon had taken the rare step of putting active-duty members of the US Army on standby for possible deployment to Minnesota. The Pentagon did not immediately respond to a request for comment.

US president Donald Trump has repeatedly lashed out at protesters, including those who surrounded the White House on Friday night.

Mr Trump, who has attracted widespread criticism for his handling of the Floyd case, said on Twitter that the “so-called ‘protesters’ at the White House had little to do with the memory of George Floyd”.

“They were just their [sic] to cause trouble. The Secret Service handled them easily,” the US president said, describing the federal law enforcement agents as “totally professional, but very cool”.

“I was inside, watched every move, and couldn’t have felt more safe,” Mr Trump said on Saturday. “They let the ‘protesters’ scream and rant as much as they wanted, but whenever someone got too frisky or out of line, they would quickly come down on them, hard, didn’t know what hit them.”

The killings of George Floyd in Minnesota, Ahmaud Arbery in Georgia and Breonna Taylor in Kentucky are reminders of the dangers black Americans like me face in living our daily lives

It was not the first time the US president has criticised protesters. On Friday morning, Mr Trump provoked anger when he suggested the military could fire on protesters, tweeting: “When the looting starts, the shooting starts.”

Floyd, a 46-year-old black man, died on Monday after Minneapolis police received a 911 call about the attempted use of a forged banknote. He was arrested by four police officers and held handcuffed, face down on the street, until he became unresponsive and was moved on to a stretcher.

The officers were fired by the Minneapolis police department this week, and one, Derek Chauvin, was taken into custody on Friday and charged with third-degree murder and manslaughter by state prosecutors.

Mr Chauvin’s lawyer did not respond to a request for comment on Friday.

Mark Mason, Citigroup chief financial officer, said on Friday: “Even though I’m the CFO of a global bank, the killings of George Floyd in Minnesota, Ahmaud Arbery in Georgia and Breonna Taylor in Kentucky are reminders of the dangers black Americans like me face in living our daily lives.

“Racism continues to be at the root of so much pain and ugliness in our society — from the streets of Minneapolis to the disparities inflicted by Covid-19,” Mr Mason added. “As long as that’s true, America’s twin ideals of freedom and equality will remain out of reach.

More than two dozen business leaders in Minnesota, including Best Buy chief executive Corie Barry and Land O’Lakes chief executive Beth Ford, cosigned a letter saying: “It is hard to watch the video of the event as it is clearly evident Mr Floyd was not treated with the dignity and respect he was due as a human being.”

The bosses said they were “committed to taking steps to eliminate the repeat of events like this in our society and committed to investing in substantive change in our organizations and the communities we serve to address racial inequities and social justice”.