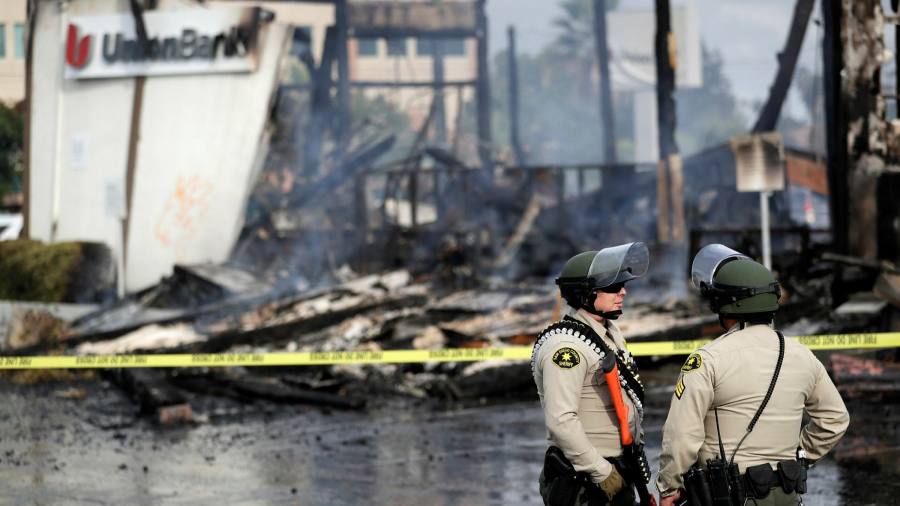 The National Guard was on the streets of more than a dozen US states and Washington DC on Sunday morning, after protests following the death of George Floyd gave way to another night of violence across America.

Angry crowds have clashed with police in major cities across the US, with fierce battles in Los Angeles, Philadelphia and Washington, in the latest display of public anger over the death of Floyd, an unarmed black man, in police custody last week. Some 5,000 members of the National Guard have been called up in 15 states and the District of Columbia, with another 2,000 prepared to deploy “if needed”.

The Floyd case, which echoes the high-profile killings of other black Americans at the hands of white police officers, has revived long-simmering tensions over race relations. It comes in the lead-up to a presidential election and in the middle of the coronavirus pandemic, which has killed more than 100,000 Americans and disproportionately affected people of colour.

“These last few days have laid bare that we are a nation furious at injustice,” Joe Biden, the presumptive Democratic presidential nominee and former vice-president, said in a statement early on Sunday. Mr Biden endorsed peaceful demonstrations, but condemned the looting and destruction that has been rampant in many cities, with cars burnt, windows smashed and businesses ransacked.

“The act of protesting should never be allowed to overshadow the reason we protest. It should not drive people away from the just cause that protest is meant to advance.”

Police have arrested nearly 1,700 people in 22 cities since Thursday, according to the Associated Press.

In New York, at least 120 people were arrested and at least 15 police cars damaged on Saturday night. Protesters threw objects at officers and torched police cars, while a video showed two police vehicles driving into a crowd of demonstrators in Brooklyn.

Similar scenes played out in large cities like Philadelphia and Chicago, as well as smaller ones including Fargo in North Dakota, and Salt Lake City, Utah.

In the south, in cities such as Richmond, Virginia, and Charleston, South Carolina, protesters vandalised monuments to the Confederacy, symbols of the Civil War and the America’s fraught racial history.

There were growing calls on Sunday for US president Donald Trump, who has attracted criticism for his handling of the Floyd case and seen his approval figures slide in recent weeks, to address the nation from the Oval Office.

A new national Washington Post-ABC News poll published on Sunday showed Mr Biden with a 10-point lead over Mr Trump, with 53 per cent of registered voters favouring the former vice-president over the sitting president.

Robert O’Brien, the US national security adviser, told ABC News the president had given “extraordinarily eloquent remarks” on Saturday about “bringing the American people together and how we stand with the family of George Floyd”.

Mr O’Brien said he did not know if the president would speak from the Oval Office, but said Mr Trump would “continue to communicate with the American people throughout this crisis”.

Yet Mr Trump’s critics said his interventions in recent days had done more harm than good. On Friday, Mr Trump provoked anger when he suggested the military could fire on protesters, tweeting: “When the looting starts, the shooting starts.” The post was hidden by Twitter, which said it violated the platform’s rules on glorifying violence.

Muriel Bowser, the mayor of Washington DC, told NBC’s Meet the Press on Sunday that Mr Trump “has a responsibility to help calm the nation, and he can start by not sending divisive tweets that are meant to hearken to the segregationist past of our country”.

Keisha Lance Bottoms, the mayor of Atlanta, said on the same programme: “What I’d like to hear from the president is leadership, and I would like to hear a genuine care and concern for our communities and where we are with race relations in America . . . I am concerned that this president has a history of making matters worse.”

Floyd died on Monday after police in Minneapolis, Minnesota, received a 911 call about the attempted use of a forged banknote. He was arrested by four police officers and held handcuffed, face down on the street with a knee on his neck, until he became unresponsive and was moved on to a stretcher.

The officers were sacked by the Minneapolis police department this week. Derek Chauvin, one of the officers, was taken into custody on Friday and charged with third-degree murder and manslaughter.