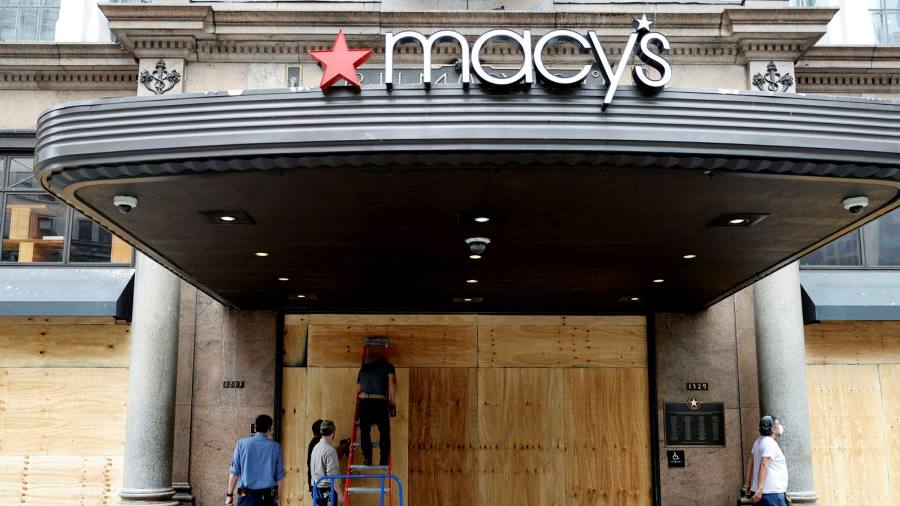 New York City has extended an 8pm nightly curfew for another five days after enduring another night of upheaval on Monday as peaceful protests were again overtaken by sporadic violence and looting.

The overnight unrest, which included the looting of a flagship Macy’s department store, prompted officials to bring forward the start of the curfew to 8pm from 11pm and extend it through the week, said Bill de Blasio, New York City mayor.

The move came as the US was braced for an eighth night of protests across the country on Tuesday, as the continued unrest amplified comparisons to the civil disturbances of the late 1960s that followed the assassination of Martin Luther King Jr.

The New York Police Department said it made more than 700 arrests on Monday night, when an officer in the Bronx was reportedly struck by a vehicle while video showed others scuffling with protesters. Macy’s in Herald Square was just one of many businesses targeted by protesters.

In addition to the curfew, Andrew Cuomo, governor of New York state, has dispatched an additional 4,000 police officers in the city to try to maintain order.

In a tweet, President Donald Trump remarked on the New York troubles and mocked Mr Cuomo and his brother, a CNN anchor, writing: “Yesterday was a bad day for the Cuomo Brothers. New York was lost to the looters, thugs, Radical Left, and all others forms of Lowlife & Scum. The Governor refuses to accept my offer of a dominating National Guard. NYC was ripped to pieces.”

New York City has been particularly hard hit. The city was among the worst affected by the coronavirus pandemic, with more than 21,000 fatalities — a disproportionate number born by predominantly black and Hispanic communities. It was due to begin reopening on Monday after nearly three months of shutdown to contain the virus.

The mayor hit out at those who he said would misrepresent the situation or fan violence. Still, he acknowledged: “Yesterday we had a lot of trouble in some parts of the city.”

He also sought to support a police force with which he has often had strained relations, adding: “We saw vicious attacks on police officers. That is wholly unacceptable . . . They are in so many ways holding the city together right now.”

In blunt terms, Mr Cuomo criticised the New York City Police Department for failing to stop the looting and attacked Mr de Blasio, saying: “First, the New York Police and the Mayor did not do their job last night. I believe that. Period. They have to do a better job.”

With 38,000 officers, the force is the nation’s largest, the governor noted. Properly deployed, he argued, there should be no need for the National Guard or the military to deploy to the city.

Mr de Blasio said that it would be counterproductive to send in the National Guard, as Mr Trump has urged local officials to do to quell the violence.

Some of the worst scenes unfolded around 34th Street in Manhattan, a central shopping district, where Macy’s, Best Buy, the Lego store and other businesses were broken into — even though many had been boarded up with plywood.

Throughout the night residents could hear the drone of helicopters overhead, the wail of sirens, shouting on the streets, and police calling over loudspeakers for people to disperse. Trash cans were set alight.

Further downtown, in Soho, the pavements of Broadway were strewn with discarded hangers and shoe boxes. Most stores were boarded up, some of the hoarding already bore slogans including “Black Lives Matter”. Security guards manned some storefronts, including the Whole Foods downtown grocery stores on Bowery and East Houston streets.