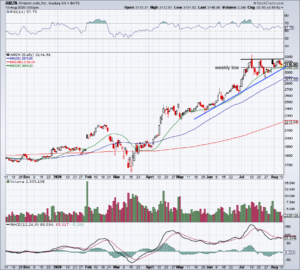 Tech stocks experienced some early selling on Monday, as there is clear sector rotation under way. The question is, how long will that rotation last? Let’s look at a few top stock trades.

We saw a rotation into airline, cruise and casino stocks on Monday, with MGM Resorts (NYSE:MGM) being a notable beneficiary of the move. Shares rallied more than 13%, but we’re not in the all-clear here.

MGM stock is being rejected by the 200-day moving average, the 61.8% retracement and the June highs near $24. As much as I love Monday’s action, I need to see a rotation over this area to get bullish. On the plus side, it’s a big level, so if MGM can clear it, bulls will be in clear control.

In early trading, we saw an outflow out of tech stocks like Amazon (NASDAQ:AMZN). However, this beast was able to bounce off the lows and recoup some of those losses, shedding less than 1% on Monday.

Still, the charts caught my eye because we could have a long or a short setup here.

On the long side, this one is clear as day. Uptrend support and the 20-day moving average continue to guide Amazon higher, with resistance near $3,250. A move over this mark puts the three-times range in play at $3,303 followed by the July high at $3,344.

On the downside, I am looking for a daily close below the 20-day moving average and uptrend support (blue line). The weekly rotation down occurs at $3,101, which AMZN flirted with on Monday. That could put $3,000 in play, followed by the 10-week and 50-day moving averages currently near $2,950 and $2,875, respectively.

Aside from sector rotation, electric car makers were on watch on Monday. Workhorse Group (NASDAQ:WKHS) garnered attention after reporting earnings and slipping about 8% on the day.

On the downside, shares are not only breaking below the 20-day moving average, but the stock is actually being rejected by this mark. Further, shares are dropping below rising wedge support (blue line).

On the plus side, it hasn’t broken below $14 range support. At least, not yet. If shares lose $14, it puts the rising 50-day moving average in play followed by a possible gap-fill down to $10.

If shares reverse and start to move higher, see that WKHS reclaims the 20-day moving average. Above puts wedge resistance in play, followed by the August highs near $20.

Nikola (NASDAQ:NKLA) was also on investors’ radar, ripping more than 20% on positive news.

The move allowed shares to reclaim the 20-day moving average, the key $40 level and downtrend resistance (blue line). Attention is now shifting to $50 on the upside, where shares find a gap-fill level from last month, as well as the 50-day moving average.

Above could put $60-plus in play. On the downside, watch $40 and the 20-day moving average. Below puts the July low back on the table.

Bret Kenwell is the manager and author of Future Blue Chips and is on Twitter @BretKenwell. As of this writing, Bret did not hold a position in any of the aforementioned securities.