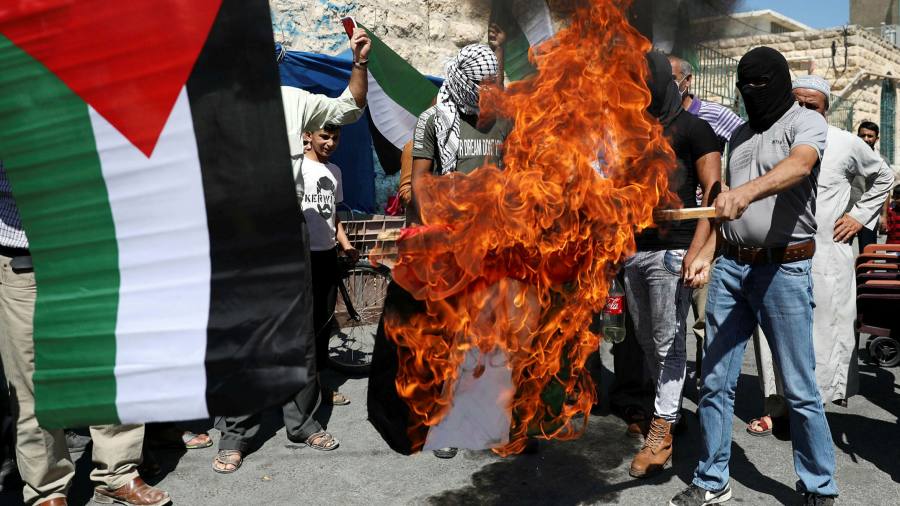 Palestinian leaders have condemned the historic deal announced by the United Arab Emirates and Israel that they are normalising relations, describing it as a “stab in the back” by one of the most powerful Arab states.

They have dismissed as “a fig leaf” the declaration that Israel would suspend its annexation of Palestinian land as part of the deal. Iran and Turkey, the UAE’s regional rivals, also voiced their outrage. Turkey’s president Recep Tayyip Erdogan on Friday threatened to suspend diplomatic relations with the Gulf state.

The agreement, announced on Thursday and which the US helped broker, means the UAE is on course to become only the third Arab state to have full diplomatic ties with Israel, after Egypt and Jordan.

Saeb Erekat, a senior leader of the Palestine Liberation Organization, said: “Peace will not be achieved through such farces.”

Jibril Rajoub, another senior Palestinian official, called for “a national mobilisation to send a message primarily to the occupation and secondly to the [Arabs]”.

As yet, no major protests appear to have taken place in the West Bank or Gaza.

The decision by the UAE to launch full ties with Israel without securing any real concessions to benefit the Palestinians signals the extent to which their cause has slid down the list of regional concerns, analysts said. While governments pay lip service to Palestinian independence, priorities have shifted as Gulf states see more value in an alliance with Israel against Iran.

Diana Battu, a lawyer and former legal counsel to the Palestinian negotiating team, said more Arab countries were expected to follow the UAE’s example. “Palestinians feel more alone and more disappointed and we sadly expect other countries to follow suit,” she said.

She argued that when Egypt and Jordan negotiated peace deals with Israel — in 1979 and 1994 respectively — there was “logic” to the arrangements such as the return of occupied land, but this time it was “normalisation without anything in return. It is the beginning of the end.”

Analysts say Bahrain and Oman may be the next countries to recognise Israel. Oman on Friday announced its support for Abu Dhabi’s move. Oman hosted Benjamin Netanyahu, the Israeli prime minister, in 2018 when he met with then leader Sultan Qaboos.

Abdel Fattah al -Sisi, the Egyptian president, also voiced his approval of the Emirati move, saying in a tweet on Thursday that the agreement “would bring peace to the Middle East” and commending “the efforts of those who made this agreement so that our region would flourish and achieve stability”.

There has been a cautious welcome from Jordan, reflecting the fact that Amman has a peace agreement with Israel dating back to 1994 but is also home to millions of Palestinians. Ayman Safadi, the foreign minister, said “if Israel deals with the agreement as an incentive to end the occupation . . . the region will advance towards achieving a just peace, but if Israel does not do so, the conflict will deepen, and explode as a threat to the security of the entire Middle East region”.

Iran and Turkey strongly condemned the deal. Tehran called it “strategic stupidity” and warned against any Israeli involvement in the Gulf. “The Islamic Republic of Iran considers the disgraceful act by Abu Dhabi to normalise relations with the fake, illegitimate and inhumane Zionist regime dangerous,” a statement by Iran’s foreign ministry said on Friday.

The statement added that the deal, which it described as “like a dagger in the back of Palestinians and all Muslims”, would “strengthen resistance, unity and solidarity against the Zionist regime and fanatic [rulers] in the region”.

Turkey’s foreign ministry accused the UAE of making “secret
calculations based on the stillborn and invalid US plan [and]
disregarding Palestine’s will. History and the conscience of the people of the region will never forget nor forgive the UAE’s hypocritical behaviour, in which it has betrayed the Palestinian cause for its own interests while trying to present it as a self-sacrifice for Palestine.”

In comments after Friday prayers, Mr Erdogan said: “I gave my order to the foreign minister. I said, “We could take measures such as suspending diplomatic relations with the Abu Dhabi government or withdrawing our ambassador,’ Because we stand by the Palestinian people.”

So far, the deal appears to have been welcomed in Israel. Mr Netanyahu has said he is still committed to the annexation of Palestinian territory, a process that has stalled in recent months.

Amos Yadlin, a former head of Israeli military intelligence and now at the INSS think-tank, said that if ties were normalised “then there is potential for a real warm peace with an important Arab state”.

“Delaying annexation or — better yet — cancelling it, would save Israel the unnecessary political, security, and economic costs and will allow it to concentrate on the very real national security challenges it is facing: economy, Covid, Iran, Hizbollah, and Hamas,” he wrote on Twitter.